Joe Biden to Charleston: 'I came to draw strength from all of you' 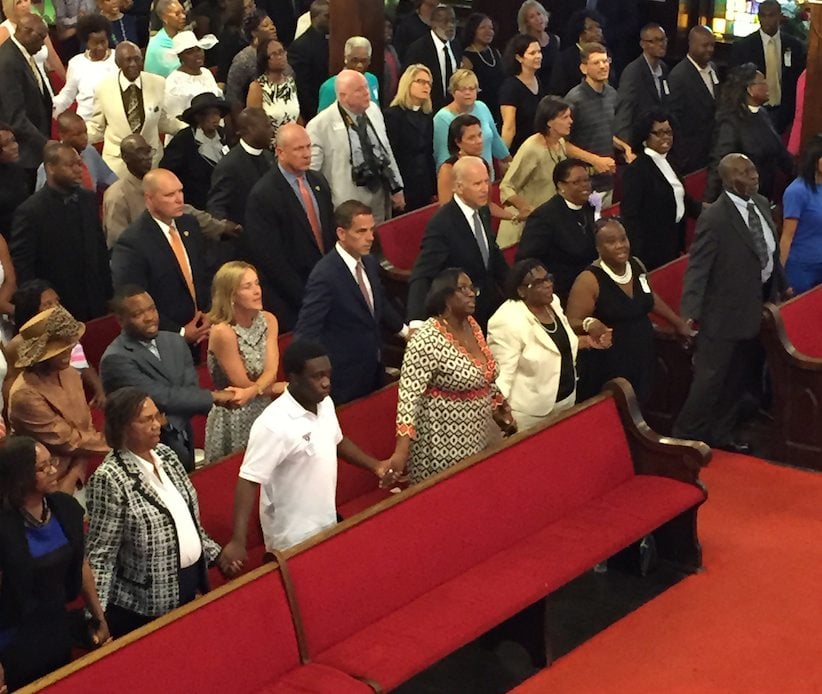 U.S. Vice President Joe Biden, center, with son and daughter-in-law Hunter and Kathleen Biden, to his right, sing “We Shall Overcome” while joining hands with Emanuel AME Church members Sunday, June 28, 2015 in Charleston, S.C. Biden delivered a short speech and said he was there to stand in solidarity with the church and families of the nine people who were killed June 17. (Melissa Boughton/The Post and Courier via AP)

CHARLESTON, S.C. — Vice-President Joe Biden worshipped and spoke at the Sunday service of the historic African-American church where nine people were gunned down during Bible study earlier this month just hours before a funeral was held for another of the shooting victims.

Biden said he’d visited Emanuel before and knew the Rev. Clementa Pinckney, the pastor of the church who was among those killed.

“We came back because my family and I wanted to show solidarity with the families and with the church,” said Biden, wearing a purple tie, a traditional colour of the African Methodist Episcopal Church.

Biden, a Catholic, showed the congregation the rosary beads he wore around his wrist and spoke about the feeling of loss within his own life.

“The reason I came was to draw strength from all of you,” Biden said. “I wish I could say something that would ease the pain.”

Biden received a standing ovation during the 2 1/2-hour service after reading a selection of scripture. He later joined the congregation in holding hands and singing, “We Shall Overcome.”

The Sunday morning service came hours before the church held a funeral for shooting victim DePayne Middelton-Doctor. The 49-year-old pastor and mother of four decided in January to return to her childhood roots in the AME faith and attend Emanuel after years attending a Baptist church.

The crowd of family and friends was so large at the funeral that many watched the service on closed-circuit TV from the church’s first floor, where the shooting took place. The mood in the overflow space was enthusiastic and many stood to clap, sing and even shake a tambourine along with the music being played at the service one floor above.

The church, founded by freed slaves in the early 19th Century, was filled during the earlier service with worshippers of different races. Some in the congregation wore minister’s robes and had come to worship from nearby churches. Four men wore traditional turbans of the Sikh faith. Groups from Georgia and New York presented donations to the church.

The church slayings have been blamed on Dylann Storm Roof, who was shown in photos posing with a Confederate battle flag and burning the U.S. flag. That prompted a drive by politicians in South Carolina and other Southern states to remove from public display the flag that critics describe as honouring a rebel movement that sought to defend slavery.

Later in the evening, Malik Shabazz, the national chairman of the New Black Panther Party, told about 30 people gathered in a small park in Charleston that the message of forgiveness expressed by the families of the shooting victims was “unnatural.”

Shabazz praised Denmark Vesey, a founder of the Emanuel AME Church who was executed for attempting to organize a failed slave revolt in 1822. Using force, including weapons, is justified in self-defence against “white supremacy,” Shabazz said. But he denied he supports violence against white people.