John Kerry breaks leg in bike crash outside of Geneva

U.S. Secretary of State returns to States for treatment 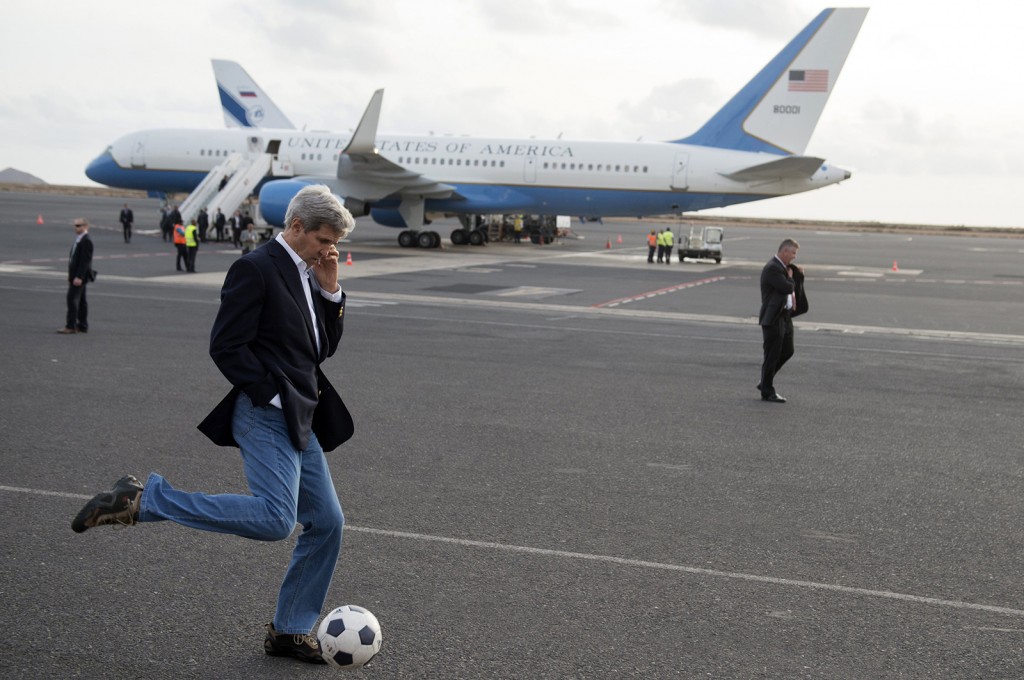 U.S. Secretary of State John Kerry kicks a soccer ball around during an airplane refuelling stop at Sal Island, Cape Verde, enroute to Washington, in May 2014.

GENEVA — U.S. Secretary of State John Kerry broke his leg in bike crash Sunday, apparently after hitting a curb, and scrapped the rest of a four-nation trip that included an international conference on combating the Islamic State group.

Kerry was in stable condition and in good spirits as he prepared to return to Boston for further treatment with the doctor who previously operated on his hip, U.S. State Department spokesman John Kirby said. He said X-rays at a Swiss hospital confirmed that Kerry fractured his right femur.

“The secretary is stable and never lost consciousness, his injury is not life-threatening and he is expected to make a full recovery,” Kirby said in a statement.

Kerry was taken by helicopter to Geneva’s main medical centre, HUG, after apparently hitting a curb with his bike near Scionzier, France, about 40 kilometres southeast of the Swiss border.

Paramedics and a physician were on the scene with his motorcade at the time and provided him immediate attention. They quickly decided to order the 10-minute-long helicopter transport.

Kerry’s cycling rides have become a regular occurrence on his trips. He often takes his bike with him on the plane and was riding that bicycle Sunday.

During discussions in late March and early April between world powers and Iran, he took several bike trips during breaks. Those talks were in Lausanne, Switzerland, and led to a framework agreement.

Kerry had been in Geneva for six hours of meetings with Iranian Foreign Minister Mohammad Javad Zarif on Saturday as the sides now work to seal a comprehensive accord by June 30.

Kerry regrets not being able to make the rest of his scheduled stops, Kirby said. The top U.S. diplomat had planned to travel later Sunday to Madrid for meetings with Spain’s king and prime minister, before spending two days in Paris for an international gathering to combat IS.

He will participate in the Paris conference remotely, Kirby said.

Kerry’s decision to seek treatment at Massachusetts General Hospital was made because the fracture is near the site of his prior hip surgery, Kirby said.