Attention Twitterverse: This is what a healthy post-partum body looks like 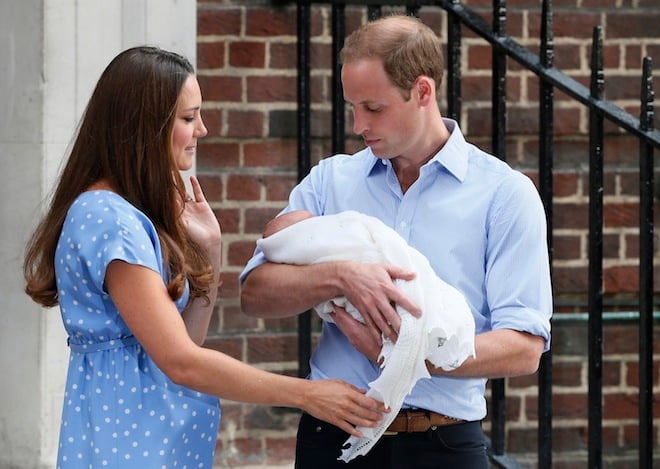 For those who missed it, the duchess of Cambridge delivered an 8 lb., 6 oz. baby boy on Monday following a 10-hour labour. The next day, she was thrust before a public throng hungry for a glimpse of the newborn prince. During the brief appearance, the new mother appeared healthy, radiant and preternaturally relaxed—glowing and seemingly well-rested. Yet one detail of her appearance seemed to confound the public, particularly young women and men. As Kate cupped her hand over her billowy dress, it was evident that her belly—one that only hours earlier had produced another human being—was still convex. Social media went ballistic—”Sky News asking why Kate still has a bump,” one tweet read;  “Kate still got her baby bump #fatbitch” read one from a man. Another woman attempted to be  slightly more humane: “We all love kate. I’m just saying she looks better without the bump #fact.”

Such ignorance about what a healthy post-partum body looks like (see here for a primer on “mommy tummy”) offers a sad commentary on the glamorized, sanitized, utterly unrealistic imagery surrounding pregnancy in our culture, particularly in gestation-obsessed celebrity tabloids. Within that oppressive genre, snark is ladled out equally for women seen to gain too much weight while pregnant — or too little, a charge levied at Kate by the British press. Women themselves routinely report disgust with feeling “fat” while pregnant: “How the f#@k did I get like this,” a somewhat pregnant Kim Kardashian whined on her reality show;  recently, the actress Selma Hayek, who gained 50 pounds while pregnant with her daughter, said carrying a child made her feel  “completely disfigured.”  The picture is further distorted by celebrities who return to their pre-baby body in record time—either by having a stealth tummy tuck after an elective Caesarian or by following regimens that would have exhausted the Spartans: the actress Kate Hudson, for one, admitted she worked out six hours a day to get back into shape.

Already Kate’s post-partum silhouette has heightened awareness of the reality gap. A theory has been floated that the fleeting sight of her belly “busts the last taboo of pregnancy”  — that it was a historical event, a political statement in solidarity with new moms everywhere. Other outlets have suggested the empire-waisted Jenny Packham dress she wore was strategically chosen to do just that. And we’ve seen fury expressed over the coverline on OK magazine’s “Royal Baby Special,” which offered the inside scoop on “Kate’s post-baby weight-loss regime.” Outraged readers  called for a boycott of the magazine, which in turn was compelled to issue an apology.  It’s a start. Whether the royal sea change will trickle down to celebrity-obsessed commoners remains to be seen.

FILED UNDER: Pregnancy Royal baby the duchess of Cambridge