Solo paddler abandoned quest hours into the trip back in 2014 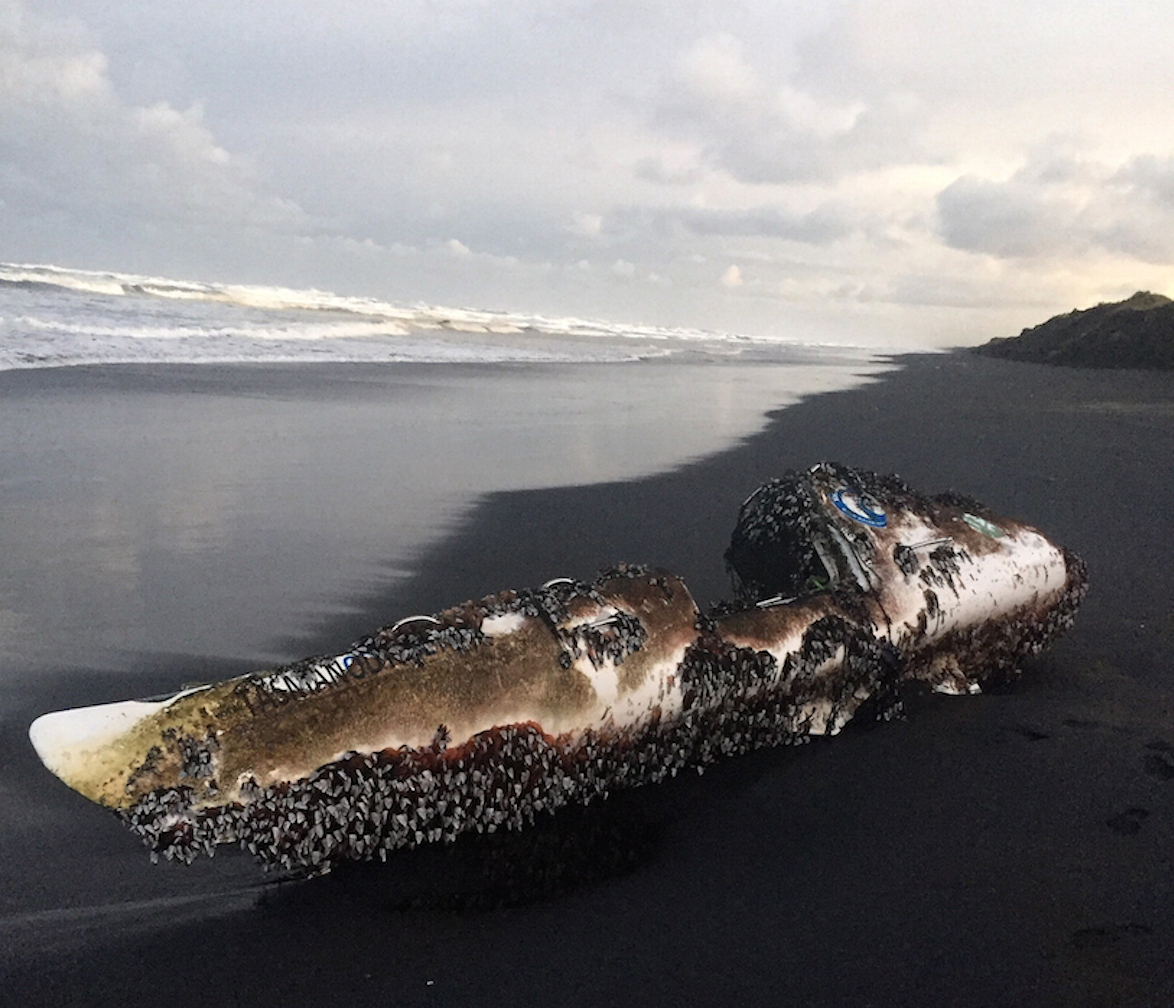 WELLINGTON, New Zealand —  Stuart Cleary set out in late 2014 to paddle solo from Australia to New Zealand. But in the end, it was his homemade kayak that completed the 2,000-kilometre (1,200-mile) journey on its own.

Just hours into the trip, Cleary ran into equipment problems. Later, his kayak started taking on water, and he was forced to abandon the vessel before being rescued at sea. Eighteen months later, the kayak has washed up on a New Zealand beach close to where Cleary had intended to make landfall.

Nathan Marshall said he was taking his dogs for a run on Muriwai Beach near Auckland on Wednesday morning when he found the barnacle-encrusted kayak. He approached it cautiously.

“I thought there was going to be a body,” he said by phone.

Instead, he found a vessel that was stained and battered but remarkably intact considering its odyssey. Inside the cabin were remnants of the failed voyage: rusted cans of food, a radio, a waterlogged first-aid kit.

Marshall posted a message seeking information about the vessel on a community Facebook page and within a few hours was talking to Cleary in Australia.

“It’s just incredible, just unbelievable,” Cleary told The Associated Press by phone from his Gold Coast home. “It seems like the kayak had a mind of its own. If only I’d known that it knew the way.”

Cleary, 54, a former oil-field diver, had spent four years training and preparing for his voyage.

He designed and built the 6-meter (20-foot) kayak, using a wooden mould that he covered in high-grade foam and layered with fiberglass. He included a cabin that was just long enough for him to sleep in.

Cleary initially had wanted to circumnavigate the Tasman Sea, but changed his plans due to the weather. And nobody had ever completed a solo, unassisted kayak crossing from Australia to New Zealand.

He left in December 2014 from the town of Ballina in New South Wales with food to last 70 days, hoping to reach land within a month.

But 12 hours later, Cleary’s GPS device started failing. Then it was his steering rudder. He turned back to the Australian coast, only to get hit by heavy seas. At one point, he opened the hatch and a wave crashed in.

“Everything went pear-shaped,” he said.

When rescuers arrived, the waves were too large for them to tow or retrieve the kayak, so they abandoned it. Cleary said he figured it would wash up in Australia or circle about and sink in the notoriously rough Tasman Sea.

“There are storms and wind and waves,” he said. “There’s a collision of weather systems — it turns into a massive cacophony of weather directions.”

Six months after the rescue, Cleary tossed out the trolley he’d used for transporting the kayak, giving up hope that he’d ever see it again.

But on Wednesday, the kayak was found washed ashore just 25 kilometres (16 miles) from the entrance to Auckland’s Manukau Harbour, where Cleary was initially headed.

“I think it’s pretty crazy that it turns up right next to where there is beach access instead of smashing on the rocks,” said Marshall, a builder, who hauled the kayak to his farm with the help of some rangers.

Cleary said he plans to visit the farm later this week, although this time he’ll be travelling to New Zealand by plane. He said the kayak will likely need to be thrown away, but first he wants to see if there’s anything he can learn from the damage it sustained.

“It feels like unfinished business,” Cleary said. “Particularly now that the bloody kayak beat me there.”