Tourism is flourishing thanks to Sacha Baron Cohen's movie 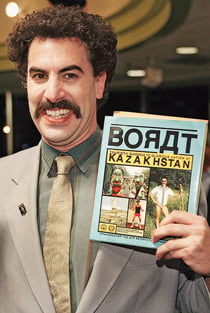 When the movie Borat: Cultural Learnings of America for Make Benefit Glorious Nation of Kazakhstan came out in 2006, officials in the Asian republic quickly banned the film about an outrageous, and fictitious, Kazakh journalist’s travels in the U.S., and threatened to sue its creator, Sacha Baron Cohen.

Then, in March, the organizers of the Arab Shooting Championship in Kuwait downloaded the Borat theme song by mistake and played it in place of the national anthem as Kazakh athlete Maria Dmitrienko stood with her hand on her heart.

Despite all this, Kazakhstan is changing its tune on the hit comedy, which depicted the country as backward, overtly sexist, anti-Semitic and homophobic.

In the capital of Astana last week, the country’s foreign minister, Yerzhan Kazykhanov, announced that Kazakhstan had issued 10 times more tourist visas since the film’s release. Indeed, Kazykhanov admitted he was “very grateful to Borat” for attracting visitors to the remote republic. He even hinted at possible “Borat tours,” targeting the rush of new tourists.