Newsmaker of the day: Kenji Goto, in the clutches of Islamic State

Newsmaker, Jan. 28: The deadline for negotiations to release the Japanese war correspondent has passed, but exchange still possible 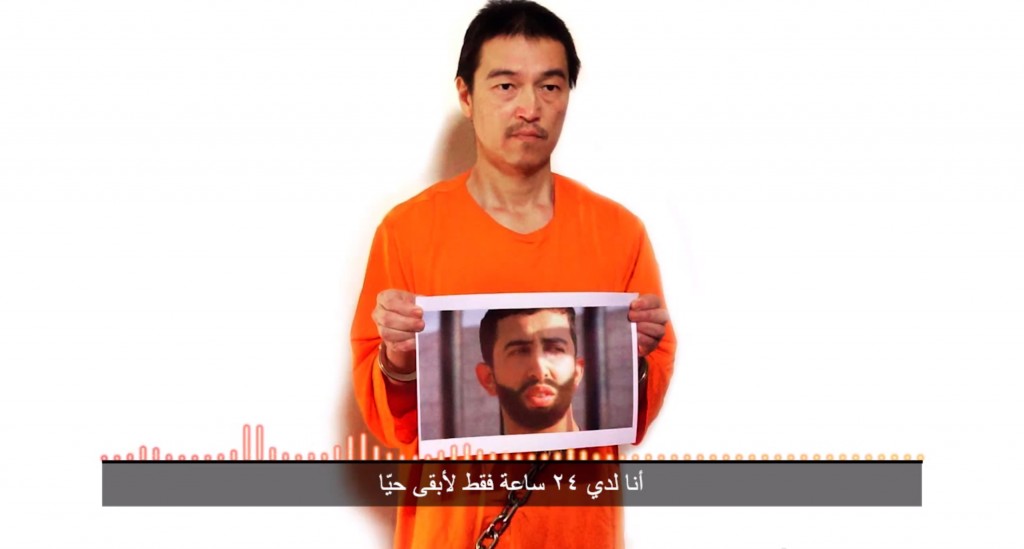 This still image taken from a video posted on YouTube by jihadists on Tuesday, Jan. 27, 2015, purports to show a still photo of Japanese journalist Kenji Goto holding what appears to be a photo of Jordanian pilot 1st Lt. Mu’ath al-Kaseasbeh. Both are being held hostage by the Islamic State militant group. (AP Photo)

Kenji Goto knew the risks. In the last video message he posted while still a free man, back in late October, the 47-year-old Japanese journalist addressed the camera and embraced the unknown. His plan to travel to Raqqa, Syria—”the hometown” of the Islamic State, he called it—was “pretty dangerous,” he acknowledged, but it was his choice.

“If an incident happens, the responsibility is on me,” Goto said in English, and again in Japanese. “Please don’t claim, or have a bad impression to the Syrian people. The Syrian people are suffering three-and-a-half years. It is enough. I would like to get the story of what ISIS want to do in Syria.”

Goto is an experienced war correspondent. Since founding his own news agency, Independent Press in 1996, he has travelled the globe, reporting on the lives of civilians caught up in conflicts in places like Liberia, Iraq, Chechnya and Afghanistan. His documentaries air regularly on Japanese television, and the soft-spoken father of three has won plaudits for both his sensitivity and his courage.

But whatever Goto thought he was getting into, the reality has surely been worse. In Islamic State hands for four months, he has seen a fellow Japanese hostage, Haruna Yukawa, beheaded. And Goto himself may already be dead, or have only hours left to live.

A 24-hour deadline for negotiations for his release, set by Islamic State, expired earlier today. And while there has been no official word, it appears that their key demand—the release of Sajida al-Rishawi, an Iraqi Al-Qaeda member held in Jordanian custody, has yet to happen. Rishawi, 44, faces a death sentence in connection with the bombing of three Amman hotels in 2005, attacks that killed 57 people and wounded 90 others. Jordan has indicated that it is willing to set her free—but in exchange for the release of Lieutenant Mu’ath al-Kaseasbeh, an Royal Jordanian Air Force pilot who was shot down near Raqqa in December during a bombing mission against ISIS forces. “We have asked for proof of life, the well-being and health of the hero Moaz [Kaseasbeh] for a while and we have received none,”  Nasser Judeh, the Jordanian foreign minister wrote in Arabic on his Twitter account, shortly after the deadline passed on Wednesday.

Pressure is building for a deal in Jordan and in Japan. Goto’s mother, Junko Ishido, has made a tearful, public plea to Prime Minister Shinzo Abe to save her son. And Kaseasbeh’s father, Safi, has begged his government to meet the kidnappers’ demands. “All people must know, from the head of the regime to everybody else, that the safety of Mu’ath means the stability of Jordan, and the death of Mu’ath means chaos in Jordan,” he said.

Islamic State, however, has already proven unwilling to spend much time or effort tying to make deals for its captives. The terror group demanded $200 million to free both of its Japanese prisoners last week, but gave only 72 hours for the payment to be made. And on Saturday—a day after the deadline expired—they released a video of Goto holding a photo of Yukawa’s corpse. The 42-year-old, a would-be security consultant with a troubled past, joins a growing list of foreigners beheaded by the group, including American journalists Steven Sotloff and James Foley, and British aid-worker David Haines.

The hope is that Goto—who may have travelled to Raqqa in part to try and rescue Yukawa, an acquaintance—will somehow avoid the same end.