'Hate is not for humans. Judgment lies with God. That's what I learned from my Arabic brothers and sisters'

By The Associated Press February 2, 2015 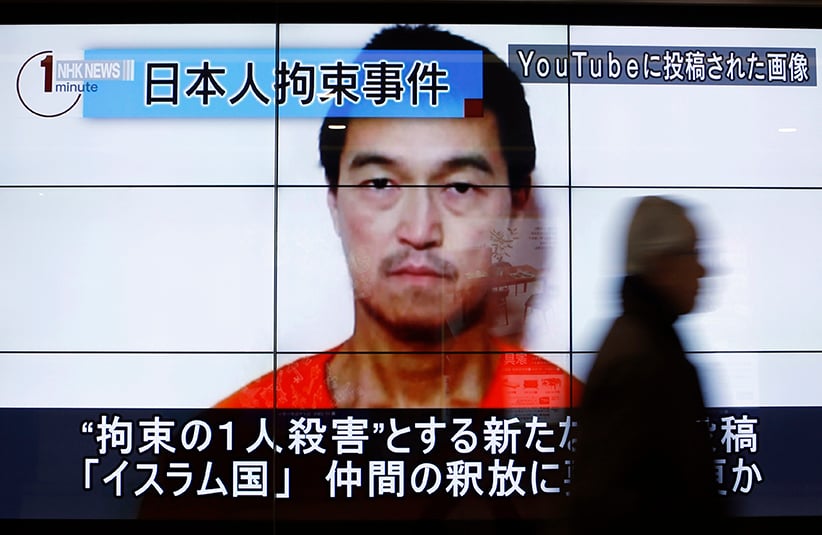 Kenji Goto’s image is shown on a television screen in Japan. (AP Photo)

TOKYO — Social media users have embraced a four-year-old tweet by Kenji Goto as a poignant memorial to the slain freelance journalist.

On his Twitter account, 47-year-old Goto mused about French wine, complained about his tired eyes, and talked to camera, reporting live from Syria. But one tweet has captured imaginations, seeming to sum up the character of the journalist who was beheaded by Islamic State extremists after a months-long hostage ordeal.

The tweet gone viral is from Sept. 7, 2010: “Closing my eyes and holding still. It’s the end if I get mad or scream. It’s close to a prayer. Hate is not for humans. Judgment lies with God. That’s what I learned from my Arabic brothers and sisters.”

It had 20,000 retweets on Goto’s Twitter account by Monday, and was being repeated by others by the minute.

The account was verified as Goto’s by his friend Toshi Maeda, who heads Tokyo-based venture Pacific Bridge, which created the mobile-video application Goto used for some of his reports from Syria.

Yuki Watabe, a 15-year-old high school student in Sapporo, northern Japan, and among those retweeting, said the tweet gave him heartache.

“He was such a wonderful person,” he said. “He had a strong sense of doing the right thing.”

The message of tolerance seemed to resonate with the thousands of Japanese Twitter users, expressing admiration for Goto’s reporting about the suffering of children in Sierra Leone, Afghanistan, Iraq and elsewhere.

Goto was shown with another hostage and his friend, Haruna Yukawa, in a video purportedly by the Islamic State group last month. Despite negotiations by the Japanese and Jordanian governments, Goto was depicted as dead in a weekend video released on social media accounts affiliated with IS. Yukawa was shown apparently dead in an earlier post. The authenticity of the videos has not been independently confirmed by The Associated Press.

Goto’s last tweet was in October, about the time he left for Syria, to rescue Yukawa, who went missing last summer.

“He was like a brother to me,” he said. “He was an inspiration. He was a friend and a colleague.”