Michael Petrou on the expulsion of Islamic State from Kobani, the Syrian town once teetering on the brink 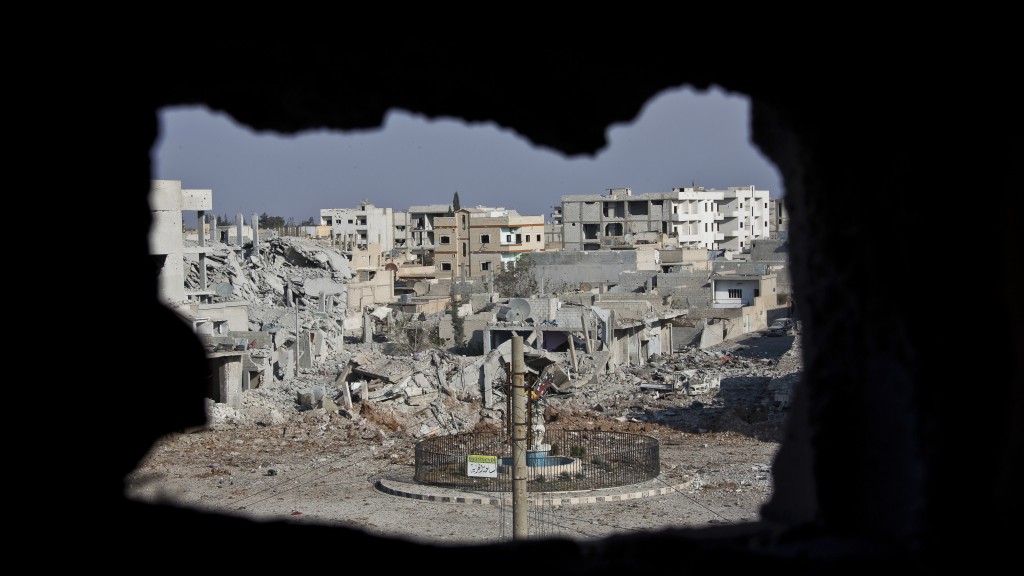 An area once controlled by the Islamic State group, past the Qada Azadi roundabout, foreground, in Kobani, Syria. (Jake Simkin/AP)

Three months ago, at a border crossing between Iraq and Turkey, I met dozens of Syrian Kurdish refugees who had fled the besieged city of Kobani and surrounding villages and were seeking shelter in Iraqi Kurdistan.

They had left behind almost everything, including the flocks of sheep and goats that were their only means of sustenance and income. Some had refused to leave, among them a young man named Zuhar Mustafa. He was unarmed, but his fellow villagers say he was determined to protect his home.

One of them pulled out his phone to show a photograph they later found on the Internet of an Islamic State fighter brandishing Mustafa’s severed head. Mustafa’s father wasn’t among those at the border. He, too, had stayed behind, pledging to recover his son’s body.

When asked why Islamic State targeted them and other Kurds, one of the refugees, Massoud Miste, replied: “They say we are Jews.”

Only days before, Pentagon spokesman Rear Admiral John Kirby was predicting the imminent fall of Kobani to Islamic State. The United States had begun bombing Islamic State positions nearby, but Kirby said these “are not going to save” the city from an Islamic State takeover.

“I think we should be steeling ourselves for that eventuality,” he said in a press briefing, adding that the United States did not have a “willing, capable, effective partner on the ground inside Syria right now.”

Today, Kobani has indeed been captured—not by Islamic State, but by the embattled Kurds who have driven them out. Despite Kirby’s prediction that air strikes might be futile, the United States continued to lead a campaign that, combined with Kurdish partners who were in fact capable and effective, has proven successful.

The scenes of utter joy filtering out from Kurds in Kobani and nearby Turkey should warm the hearts of those watching from abroad. These are people, given up for lost, who, with help, liberated themselves. That so many of the Kurdish frontline fighters are women is a particularly sweet detail when one considers the abject misogyny of their Islamic State enemy.

There are scores of towns and millions of people still under the control of Islamic State, and much fighting lies ahead. Iraqi and Kurdish forces, and their international partners, including Canada, are planning a campaign to retake Mosul, the largest city in Iraq still in Islamic State’s hands.

Kobani, in comparison, is a small city. But it is one with enormous symbolic importance given the struggle that has occurred there. For Kurds, who throughout history have experienced more sorrow than triumph, its name, and today’s date, will become legendary.