Las Vegas shooting: Hear from the Canadians who survived 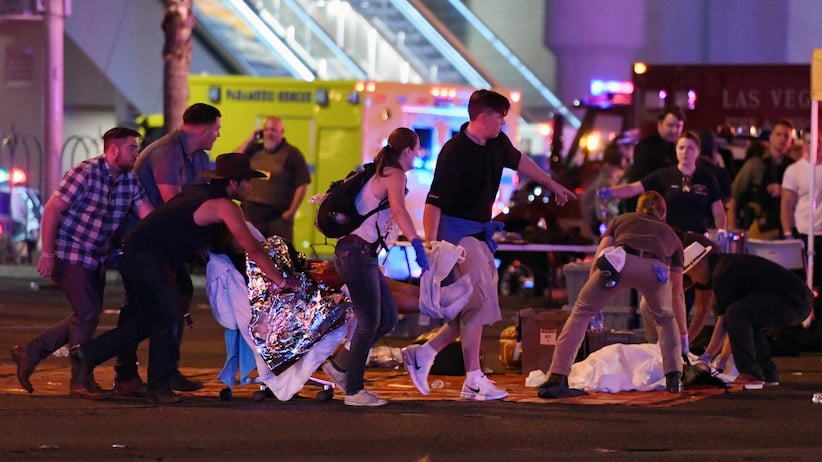 LAS VEGAS, NV – OCTOBER 02: An injured person is tended to in the intersection of Tropicana Ave. and Las Vegas Boulevard after a mass shooting at a country music festival nearby on October 2, 2017 in Las Vegas, Nevada.  (Photo by Ethan Miller/Getty Images)

Several Canadians were caught in the panic Sunday night in Las Vegas when a gunman opened fire on people attending a country music concert.

The shooting left 50 confirmed dead by authorities and hundreds of people injured.

Here are some of the firsthand accounts from Canadians who were at the scene when the mass shooting occurred.

Jenni Watson from Vancouver is staying in the Excalibur Hotel one block away from the Mandalay Bay — she called NEWS 1130 shortly after the shooting on the Las Vegas Strip last night while hiding in a cupboard in the lobby.

“People are just freaking out and went screaming toward the exit. Security is everywhere and we’d heard [rumour the shooter] was in here and then all of a sudden people started running like crazy,” she told NEWS 1130 from her hiding place.

“We wanted to go up to our rooms but they don’t require a key to go up the elevator so you are almost a sitting duck going up to your room. We just have no idea where to go.”

“It felt like it was a movie, everyone running.”

That’s how an Ayr man, who’s in Las Vegas with friends, is describing the seconds and minutes that followed, what is now the deadliest shooting in U.S. history.

A Calgarian hoped to make fun memories to last a lifetime on her girls’ trip to Vegas this past weekend — she’ll now be remembering it for something horrible.

Mikey Unger was attending the festival with five friends and was walking back from the washroom when the chaos began.

“We started hearing, like, kind of popping noises, but it just didn’t register what it was,” she said.

READ MORE: Praying to God is not stopping the mass shootings in the U.S.