Libya is on the brink of civil war, again

In the wake of the NATO bombings that ousted Gadhafi, a new divisive force emerges 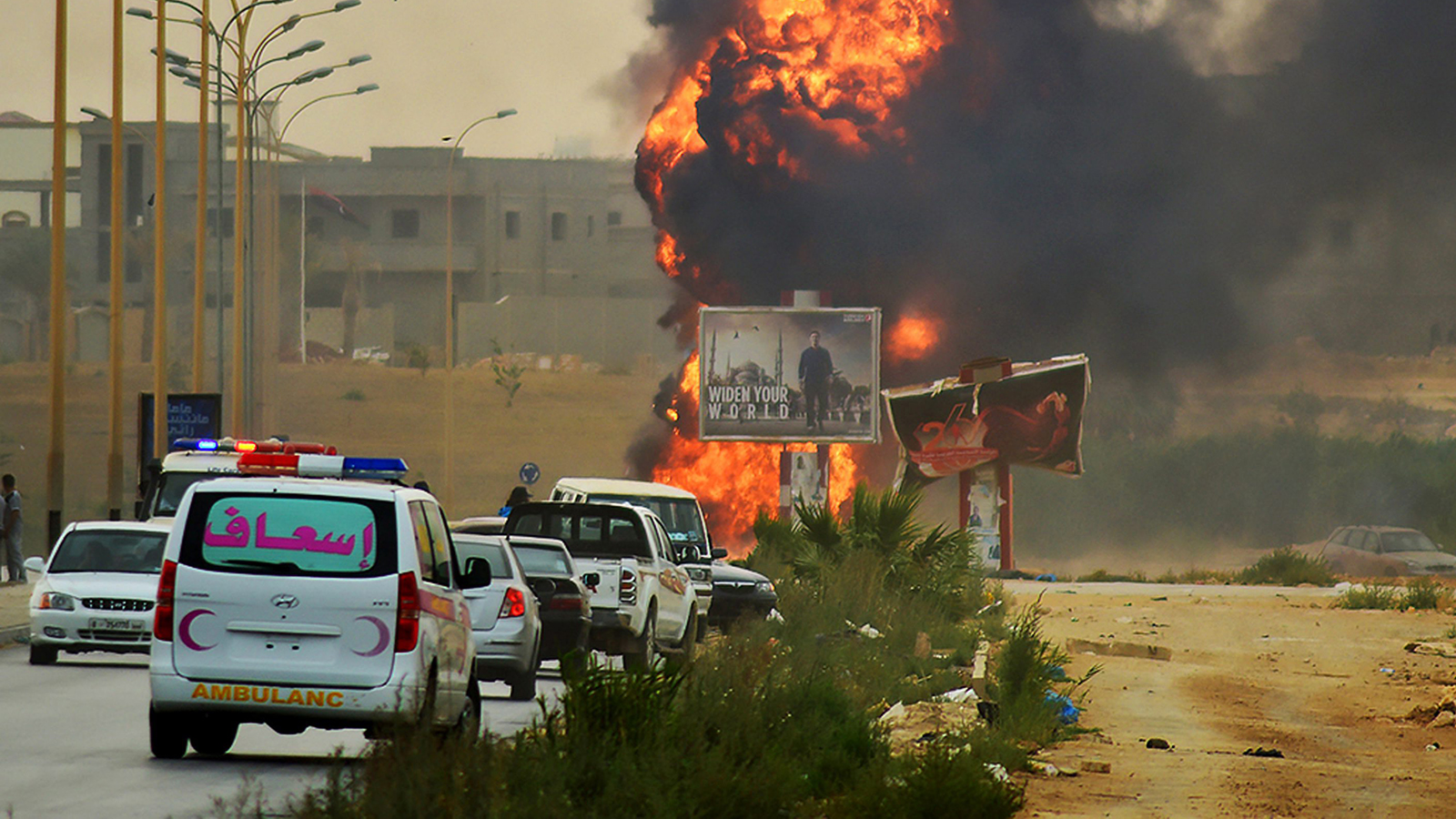 In the early days of the Arab Spring, according to a Libyan diplomat, Tunisians would mock Libyans by admonishing their neighbours to the east to keep their heads down so that they, in Tunisia, could have an unobstructed view of the real revolutionaries in Egypt, who had risen up against the long autocracy of Hosni Mubarak.

The barb stung, but only briefly. Libyans soon did take to the streets against their dictatorial ruler, Moammar Gadhafi—and when they did so, the costs were steeper than anywhere else in the rebellious Arab world except Syria. Gadhafi vowed to crush the challenge to his rule, and a civil war ensued with NATO throwing its air power, including Canadian fighter jets, behind the rebels. By the time Gadhafi was toppled in October 2011, more than 10,000 Libyans had died.

Such a price for victory might have galvanized a collective desire to unify and rebuild and, while many Libyans tried to do exactly that, the country has been plagued by divisions and competing power struggles that have kept Libya fragile and unstable ever since. Its parliament, the General National Congress, is weak. There have been three prime ministers since March. Independent militias are powerful and control large chunks of territory. There is an active federalist movement that wants greater autonomy, if not outright independence, for eastern Libya. And there is a gulf that separates—broadly speaking—Islamists from their more secular opponents.

Now a new force has entered Libya’s chaotic political arena, widening that gulf, sparking the most deadly fighting since the end of the civil war—and, quite possibly, making an attempt to run the country.

Khalifa Haftar is a former military commander who served under Gadhafi and led troops during the Chadian-Libyan conflict, a series of clashes in the 1970s and ’80s. Captured by Chadian forces in 1987, he defected to Libya’s opposition and moved to America. Much about his life in the following years is murky. He lived in Langley, Va., and may have co-operated with the CIA in its attempts to undermine Gadhafi. There are unconfirmed reports that he took part in a failed 1996 uprising in eastern Libya. Haftar returned to Libya in 2011 to join the civil war against Gadhafi. He did not emerge from that conflict as an obvious leader.

Then, this February, Haftar appeared on television, calling for the suspension of government, in what may have been a clumsy attempt at a coup. Few paid much attention. Haftar was ordered arrested, but escaped to eastern Libya.

Haftar calls his ongoing campaign “Operation Dignity” and says its target is terrorism. In practical terms, this means Islamist militias and their ideological partners, whom he says have infiltrated parliament. Haftar says he does not seek power himself, but would stand for president “if asked” by the Libyan people.

Haftar’s support is difficult to gauge. Insecurity in Libya has reached a point where some Libyans are willing to back a strongman who promises order. Senior military officers have come to his side, as has former prime minister Ali Zeidan, a liberal who was sacked by the General National Congress in March. Egypt, now led by the anti-Islamist former general Abdel Fattah al-Sisi, would be a natural ally, but has not intervened. Haftar denies any sort of outside assistance.

Jason Pack, a Libya analyst and researcher at Cambridge University, cautions that some of those who support Haftar do so because of his claim to lead Libya’s anti-Islamist bloc, not because of any regard they hold for him personally.

For the moment, though, Libya is polarizing, and Haftar’s rhetoric risks intensifying that process. “The most disturbing picture is this introduction of a narrative of a war on terror, that the space for actual opposition is closing and all Islamists of all stripes are being tarred as extremists or jihadists or al-Qaeda,” says Frederic Wehrey, a senior associate in the Middle East program at the Carnegie Endowment for International Peace.

There are radical jihadists in Libya who have benefited from its post-revolution disorder. Among them were those who assaulted the American diplomatic mission in Benghazi and a nearby CIA building in September 2012, killing four Americans, including ambassador J. Christopher Stevens.

“Those individuals probably need to be dealt with through arrests, rendition or kinetic [air] strikes,” says Wehrey. “But [we] just want to make sure that we’re not rolling other people into that category. To say, as some in Washington have said, that this country has fallen to extremists, or that the government is penetrated by extremists, is disingenuous.”

Haftar does not appear overly interested in such distinctions, nor in a negotiated peace: “We see that confrontation is the solution. What is the discussion? They are armed. I do not think that talks will work with them,” he said in a recent interview with the Washington Post.

Haftar’s uprising also presents a dilemma to Libya’s Western allies who have agreed to help train its military. More than 300 Libyan soldiers were scheduled to arrive in Britain this week to begin a 24-week course. Hundreds more have already been trained in Turkey and Italy. The United States is planning to train Libyan personnel at bases in Bulgaria. “We’re dealing with a military that has basically turned on itself,” says Wehrey. “If we start training Haftar’s factions, we’re implicitly endorsing a very dangerous drift toward something resembling a coup, or this authoritarian drift.”

Canada is not taking part in the international military training mission. A spokesman for the Department of Foreign Affairs, Trade and Development says “efforts are under way” to deploy five Canadian police officers to work with their Libyan counterparts through the United Nations Support Mission in Libya.

Pack argues that Libya’s foreign allies should continue to engage in Libya by helping it to build state institutions, including competent armed forces. Not doing so because of the instability buffeting the country will only weaken the foundation on which a functional central government might one day stand.

There are reasons to be optimistic that Libya will achieve such an outcome. The country does not have the same sectarian or ethnic divisions that have frayed places such as Iraq or Syria, and most Libyans have a shared sense of statehood, says Wehrey. “There is intermarriage between regions and tribes. It’s a very small place, and everybody seems to be five people removed from their neighbour, so that has certainly helped keep the country from going over the brink.”

Libyans, however, are rebuilding their country virtually from scratch. Gadhafi was an absolute dictator and, when he was gone, there was little in the way of institutional scaffolding to keep the state from crumbling. His ouster may prove to be the easy part in creating a stable, democratic country.