The country is likely to follow Egypt and Tunisia, electing an Islamist government 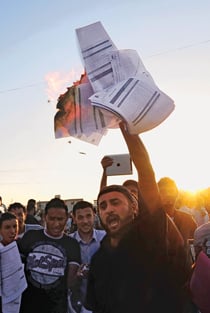 Libyans will go to the polls this weekend for the first time in almost a half-century. For many—from young YouTube progressives who advertised the uprising that ousted Moammar Gadhafi to grizzled dissidents who endured years of prison—the election will be the fulfillment of a dream. Or it should be.

For 79-year-old Ahmed Al-Zubair al-Senussi, the longest-serving Gadhafi-era political prisoner, the elections will be a bittersweet moment. Libya, he argues, is now being controlled by a “shadowy cabal of former Gadhafi officials, Islamists and Muslim Brothers,” in the governing National Transitional Council (NTC). This force appears likely to maintain power in Tripoli after elections for a 200-member congress charged with overseeing the drafting of a constitution.

No party will secure a majority, thanks to complicated rules dividing voting between party and individual candidates (and more than 142 parties are fielding candidates). Even so, Libya’s Muslim Brotherhood has emerged as the country’s most organized political force, and a strong performance will mean that a third Arab Spring country could soon be controlled by Islamists, following Tunisia and Egypt. Expect “a repeat of what is happening in Tunisia with pressure on women to cover up, and raids on art galleries,” warns Majid Wanis-Gadaffi, the son of the country’s last prime minister under King Idris.

“Hard times need prayers and patience,” says Senussi chuckling, explaining how he survived incarceration for 31 years, the first nine in solitary confinement, punishment for plotting a coup attempt against Gadhafi. Senussi, a member of the NTC, is calling on supporters in Benghazi, the country’s second largest city, to boycott the elections unless Libya’s interim leaders agree to revive the federal system with three semi-autonomous provinces—Tripolitania in the west, Fezzan in the southwest and Cyrenaica to the east—established after the Second World War.

The federalist movement is gaining ground in Benghazi, the capital of Cyrenaica, a province covering almost half the country. In May, more than 3,000 tribal and militia leaders from Cyrenaica announced the formation of a semi-autonomous region. “We will not initiate any shooting but the NTC must not cross a line,” says Senussi, who also leads the self-declared Cyrenaica Transitional Council.

Mustafa Abdul Jalil, the NTC chairman and former Gadhafi justice minister, is so spooked by federalists that he recently dispatched a team to Benghazi to negotiate with the federalists. One Jalil proposal is for a series of regional elections to choose members of a constitution-drafting body, rather than having them appointed. That idea would breach the Constitutional Declaration, the only legal framework in place to guide post-Gadhafi Libya.

But then Libya’s interim leaders have hardly been observant of rules and procedures—and that has added to a sense of uncertainty in the run-up to the elections. Jalil and his coterie have frequently interfered with Libya’s election commission, say NTC and commission insiders. As a result, several commissioners have resigned, reducing their number from 17 to nine.

How the NTC itself operates is clouded in mystery. The body fails to meet regularly, seldom debates as a whole and rarely takes formal votes, says Senussi. “Decisions are just handed down to us and how they are arrived at isn’t clear,” he says.

In its final days of power the NTC hasn’t let up issuing new laws—some controversial, such as regulating foreign NGOs operating in Libya and setting up the Supreme Media Authority. In late June, the new media authority seized control of one of Libya’s two public broadcasters, under whose authorization isn’t clear. Nor is it clear who took the decision to call back to work many Gadhafi-era intelligence officers, including experts in electronic surveillance.

The emergence of different committees and agencies with obscure lines of authority smacks of the Gadhafi era, with its plethora of revolutionary committees and People’s Leadership Councils. Under Gadhafi that Byzantine system maintained the fantasy that Libya was run by direct people’s democracy. Once more, the decision-making process is being obscured and controlled from above.

Much of the opacity helps the old Gadhafi figures and Muslim Brothers around Jalil avoid confrontation and disguise their weakness beyond Tripoli, says one European diplomat. Certainly challenges abound for the consolidation of power. The country is awash in guns and militias are undermining security, getting involved in regular firefights and arbitrarily detaining and torturing opponents and suspected Gadhafi loyalists, argue human rights observers. “They are out of control,” says Amnesty International’s Diana Eltahawi. Post-Gadhafi Libya sometimes appears like 15th century Italy: a patchwork of belligerent city states all determined not to be sidelined.

In the run-up to the polls, the micro-conflicts mixing militias, tribes, ethnic groups and Gadhafi loyalists have increased in tempo and ferocity. In Misrata and Zintan the militias that spearheaded the assault on Gadhafi snub central authority. Zintan’s militia has refused to transfer to Tripoli Saif al-Islam Gaddafi, the dictator’s son who is being held in a makeshift prison in the city.

And in Benghazi, radical Jihadists have launched disturbing although unskilled attacks on the U.S. consulate, Red Cross, the British ambassador and the Tunisian mission.

Will elections this week help stabilize the country and usher in transparent government? The complex voting system dictated to the election commission by the NTC is likely to result in a national congress where independents representing competing local and city interests are in the majority. That could make for deal-making chaos or be a recipe for manipulation.

The best organized are the Muslim Brothers, who, as in neighbouring Egypt and Tunisia, have decades of political and social work behind them and formidable credentials when it comes to opposing the now-toppled dictatorships. Of great significance will be how many of the individual candidates are disguised party loyalists. There is a widespread suspicion that the Muslim Brothers have been the most astute at packing lists of individual candidates.

Like Egypt’s new President, Mohamed Morsi, the Muslim Brothers’ leader in Libya, Muhammad Suwan, a former Gadhafi-era political prisoner, emphasizes a willingness to be pragmatic and inclusive and to accept diversity. And while the ascendency of yet another Brotherhood government may startle some in the West and worry more secular-minded Libyans, Abdul Rahman El Mansouri, a former Libyan exile and now an adviser to the NTC, argues it shouldn’t. “So what if the Muslim Brotherhood gets voted in? If they don’t do things people want, they will get voted out.”