Life amidst the ISIS insurgency

Adnan R. Khan reports from Syria where normalcy is slowly returning after ISIS, but fear lingers. ‘People say they are everywhere, hiding and waiting.’ 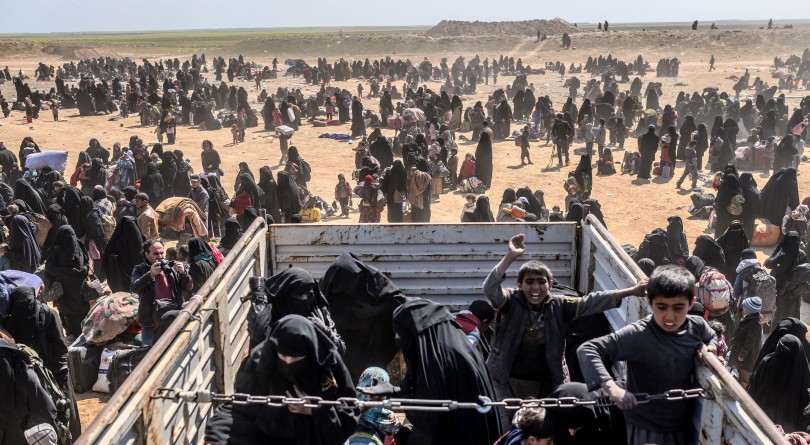 Women and children evacuated from the ISIS holdout of Baghouz arrive at a screening area held by the U.S.-backed SDF, in the eastern Syrian province of Deir Ezzor, on March 6, 2019. (BULENT KILIC/AFP/Getty Images)

The story of the ISIS rise to power in Iraq and Syria began with terrifying images of religious fanatics conquering entire cities and, at its height, controlling enough territory to qualify as a small nation. This week, we saw its antithesis: thousands of citizens of the ISIS self-proclaimed caliphate running for their lives, ragged and broken, from its last, dusty patch of land in eastern Syria.

At the risk of sounding cold and heartless, it was poetic. When Abu Bakr al Baghdadi first ascended the steps of the al Nuri mosque in Mosul in July 2014 and proclaimed the return of the caliphate, he spoke like a king atop a mountain of gold. The future, he declared, belonged to his followers. God was on their side and with His blessing, the caliphate would continue to grow.

Instead, it shriveled and died. Since the fall of his capital, Raqqah, at the end of October 2017, Baghdadi has presided over a decaying carcass, eaten away internally by rebellions and obliterated externally by relentless airstrikes. Those who have continued to fight for him, mostly foreigners left to defend its last vestiges, have done so not for Baghdadi’s cause; they fight because they have no other choice.

READ MORE: With the fall of Tel Abyad, the tide begins to turn on Islamic State

As of writing, they continue to fight, despite recurring rumours over the past month that ISIS was days away from total defeat. On Feb. 9, the SDF, the Kurdish-led and U.S.-backed alliance of militias fighting ISIS, began construction on a stage at its forward operating base at the Omar oil field where, journalists were told, an announcement of victory would be made “within days.” Still the fighting raged on. More than two weeks later, after dozens of ISIS fighters surrendered, social media lit up with news of its defeat. It was again premature.

Of course, it’s only a matter of time before the end comes in earnest. This week’s images from Baghouz al Fawqani, the rundown farming town near the Iraq border where ISIS has made its last stand, had the feel of a climax: a tent city, where its last fighters and their families were taking shelter, was engulfed in flames. Explosions lit up the night sky, tracer bullets streaming through the darkness like jet-fueled fireflies. And then there was the exodus.

The end is indeed near. But the question is: Will it truly be an end?

Not according to security administrators in northern Syria. From their perspective, as ISIS territory has dwindled, its insurgency has picked up pace. On a mid-February visit to Syrian cities once controlled by ISIS, including its former capital, Raqqah, Maclean’s found police forces struggling to identify and neutralize ISIS sleeper cells and locals worried about the shadow of ISIS ideology still looming threateningly over them.

The mood was tense, even as people rebuilt their lives and life seemed to be returning to a semblance of normality. In the neighbourhoods behind Raqqah’s Naim Square in the city centre, women sat in the open air, soaking in the midday sun. Children played in the maze of half-demolished buildings while bulldozers cleared away the rubble.

Naim, which roughly translates as “Paradise”, was the site of some of ISIS’s most brutal acts of violence, where it executed those accused of spying and left their bodies rotting for days as a warning.

The square has been rebuilt since ISIS was driven out of Raqqah, the garden that once grew in its central roundabout replaced by a fountain symbolizing the re-birth of the city. But the memories of ISIS are much more difficult to erase. Umm Rashid, a 28-year old mother of three, told Maclean’s the echoes of its draconian interpretation of Islamic rules still reverberate in the banal, everyday details of life.

“Before Daesh came, Raqqah was not so conservative,” she said, referring to ISIS by its derogatory Arabic acronym. “We women could walk around wearing jeans, without covering our heads. But even now that they are gone, we still haven’t taken off our coverings. Now the city is full of women in the full niqab.”

Umm Rashid said she removed the face veil she was forced to wear under ISIS rule shortly after Raqqah was liberated by the Kurdish YPG forces but removing her chador, the black, full-body cloak she still uses, has proven more difficult.

“I’m afraid of Daesh still,” she said. “People say they are everywhere, hiding and waiting. If they see me without my chador, I’m afraid they will cause problems for my family.”

Fear is the poison that sustains the ISIS ideological monster, and like all monsters, it thrives in the shadows. Night time in Raqqah and its surrounding countryside still belongs to the militants, a time when mothers like Umm Rashid lock their children behind steel doors and fathers keep loaded rifles close at hand.

After the liberation of Raqqah, as ISIS rapidly lost territory, it began shifting its focus to what it knows best: fighting as an insurgent group. Over the past year, it has deployed all of the tactics it perfected during the height of its insurgency in Iraq in the mid-2000s, from roadside bombs to drive-by shootings to kidnappings and night raids, instilling fear and distrust wherever it operates.

According to an August 2018 UN report, as many as 30,000 ISIS fighters remain at large in Iraq and Syria, the vast majority of them local Sunni Arabs who abandoned their foreign brothers and sisters to melt into local populations and prepare for an insurgency. In Iraq, that insurgency is already drawing resources away from much-needed reconciliation and reconstruction efforts. Mosul, which was liberated in the summer of 2017, remains in ruins, despite Iraq exporting more oil now than it has at any time over the last two decades. In Nineveh and al Anbar provinces, the predominantly Sunni Arab regions where ISIS was born, millions remain displaced and dependent on aid.

Syria is worse off. With no end in sight to the civil war, liberated cities like Raqqah are struggling to meet the needs of its residents. Many have left, choosing to relocate to areas of the country still controlled by the al Qaeda-aligned Hayat Tahrir al Sham, in part because those regions receive more aid through Turkey and in part because locals say, as Sunni Arabs, they face less discrimination living among their ethnic coreligionists.

Mahmoud Ismail, the 43-year old co-president of Raqqah’s self defense forces, told Maclean’s his officers face an increasingly difficult task convincing locals that the new administration is working for all the people, regardless of ethnicity or sect. ISIS sleeper cells are only part of the problem, he said. “We have found regime sleeper cells, and Iranians as well. They want to create chaos and divide the people.”

Ismail, a Kurd, is also prone to some of the ethnic distrust ISIS fomented. Women who still cover themselves, from his perspective, are all ISIS sympathizers, a sentiment that pervades the Kurdish members of the SDF and the Civilian Councils it has set up throughout northern Syria. And the mistrust is reciprocal: Arabs in Raqqah and elsewhere consider the SDF and its Civilian Councils Kurdish structures designed to replace centuries-old tribal systems that have historically dominated the political landscape in northern Syria.

Ethnic and sectarian divides, along with economic grievances, are the fuel ISIS needs to survive and re-exert its influence. Both in Iraq and Syria, sectarian politics and war have shredded any sense of national unity that may have existed in the past. It helped create ISIS and though its caliphate is now decimated, the process of its destruction has produced more fuel for its resurgence.

In Baghouz al Fawqani, the destitute fighters stumbling out of its last stronghold are really only a misdirect, a façade of defeat the ISIS leadership had been setting up for months, perhaps even years. The real fight is still to come, and it won’t be won with bombs.