Life in London: No, we are not 'under attack'

It's not about 'keeping calm and carrying on'. What Londoners are doing after the latest attacks is keeping things in perspective. 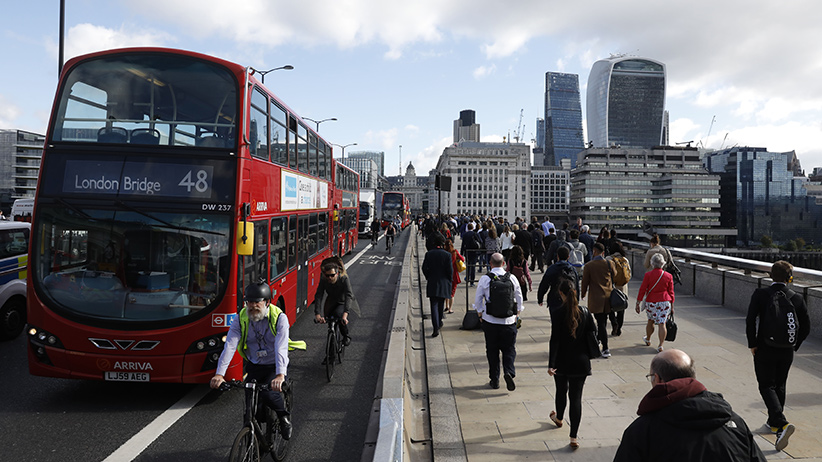 Pedestrians walk across London bridge by newly installed barriers in London on June 7, 2017.
British police on Wednesday said a 30-year-old man had been arrested following the June 3 terror attack in London which killed seven people and injured 48. (ODD ANDERSEN/AFP/Getty Images)

It’s strange living in a city that according to much of the world’s media is “under attack,” particularly when it isn’t.

This morning I took my son to school and chatted to the other parents at drop off about the miserable June weather. When our local child minder arrived to take the baby I wished her a happy Ramadan and we laughed more about the rain. At a recent dinner party full of media types, barely a mention was made of the attacks in Manchester or London Bridge. My cockney cab driver didn’t even want to talk terrorism on the drive home. For him, it was all about climate change and the Russians.

In small part, I think this is because, even for a nation of news junkies, Britons are a bit saturated with current events at the moment—we go to the polls on Thursday for our second general election in as many years. But the main reason most people are behaving normally is that there really is, so far, nothing to panic about.

London is not “under attack.” While three deadly incidents in just over three months have been utterly tragic for those involved and a sucker punch to the nation’s gut, historically speaking they are little more than a blip in terms of the political violence this city (and indeed country) has endured in the very recent past.

And while Londoners have certainly been startled and unnerved, recent events have not been cause for hysteria or division. It’s important to remember that death and injuries caused by terror attacks in Britain were overwhelmingly more prevalent in the three decades leading up to the turn of the last century compared to the decade and a half since. In large part, this was down to the Irish troubles but there were other factors as well–for instance, over 300 people were killed by terrorism in 1988, the year of the Lockerbie bombing.

This is not to say that some British establishment figures aren’t adopting a U.S.-style rhetoric of fear where they think it might aid them. Prime Minister Theresa May announced in the last days of her campaign that if elected, she would happily abolish British human rights laws if it helped her to target suspected terrorists. (She declined to mention what effect this might have on the lawful protection of human rights.)

On the more local front, my young son brought a newsletter home from his primary school with a note in it about the school’s security and safety procedure in the event of a terrorist attack. It was meant to reassure parents but it had the opposite effect of plunging me into annoyance. Putting up traffic guardrails outside the school would likely do far more for the health and safety of students, I thought irritably. But still, I’d be lying if I said it didn’t give me pause. My four-year-old son doing terrorism security drills? It was impossible not to shudder.

And then there’s my friend Morgan Gabereau, another Canadian transplant living in London with his family, who was actually walking along the Southbank toward London Bridge just after the attacks occurred. He told me he his wife noticed “waves and waves of very drunk-seeming people, many of them crying or running,” moving away from Borough Market, to which they themselves were headed in order to catch their train home to South London. In the end they watched a police van pull up and a team of heavily armed cops jump out and disappear into the Victorian bowels of the tube station. On their bus ride home they met three young lads who claimed to have been in the bar where the stabbings had occurred. “They were clearly distressed but also quite numbed as they’d just kept on drinking until police escorted them out,” he said.

This is also very London: When in doubt, go to the pub. And if an attack happens while you are in the pub, you might as well finish your pint.

When I asked Morgan if the experience had given him any pause about choosing to raise a family here, he shook his head. “Look, I definitely felt the fear on Saturday night. It was real. But ultimately it hasn’t changed anything. This city has much bigger problems than terrorism. The real estate market is a more significant factor in determining my family’s future than a couple of maniacs on the bridge.”

Londoners aren’t prone to histrionics, certainly not in the face of political violence, and that is a blessed thing. I always think of that famous picture of a lady in a housedress, with her hair up in a towel, drinking tea on a pile of rubble during the blitz. For me that photo sums up the general attitude in this town–and offers deep comfort. Spare me the platitudes about “keeping calm and carrying on.” What Londoners are doing today is just keeping things in perspective. It’s as simple and obvious as that.

And let me also say this: It is entirely possible to mourn the innocents dead in Manchester and London and to simultaneously recognize that we are still—as it stands—overwhelmingly safe. Donald Trump struggles with this sort of cognitive dissonance, but Londoners, thankfully, do not.