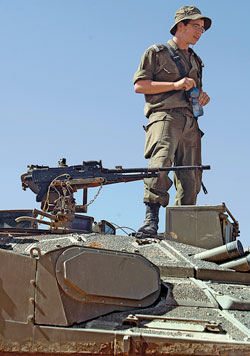 When insurgents launched a rocket-propelled grenade at an Israeli tank in the southern Gaza Strip last Tuesday, they had no idea they were about to make battlefield history. Within a heartbeat of the trigger pull, a smaller rocket was automatically launched from the vehicle and detonated in mid-air, wiping out the RPG before it could cause any damage.

The event marks the first time the new Israeli Trophy system, a vehicle-mounted defence mechanism that identifies, tracks and destroys anti-tank missiles, has eliminated a projectile in active combat. Developed by Israeli weapons firm Rafael, it has only been in limited deployment for two months, but is now poised to be widely integrated over the next year. “The system will significantly reduce the anti-tank injuries in the next confrontation,” said Brig.-Gen. Agay Yechezkel, a spokesman for the Israeli military.

The system isn’t cheap—it costs about $1 million per unit—but is so advanced that it can even track projectiles back to their origin, alerting soldiers to the location of insurgents. Considering it also saved the Israeli tank crew’s lives, Trophy may be well worth the price.