Long-legged, and looking for friends

The giraffe population has quadrupled in just 13 years 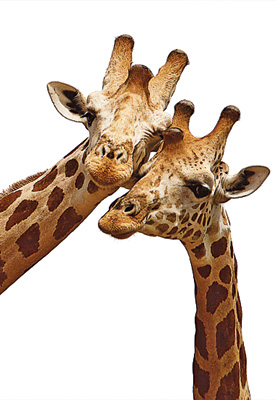 Just a decade ago, the giraffes of West Africa, famous for their large orange-brown spots and skinny white legs, were on the verge of extinction. From Senegal to Chad, the breed had been over-hunted, and displaced by human populations and advancing deserts during the last century. In 1996 it was estimated that a mere 50 still roamed the continent.

Yet despite predictions that they could vanish for good, the giraffes have made a remarkable comeback: in just 13 years, it is estimated that the population has quadrupled in size. Credit for the turnaround is being attributed to government intervention, conservationists and locals, who are working together to protect the towering creatures while also striving to live harmoniously with them.

Once, the giraffes were hunted and poached for their skin, meat and even hair, but now many countries prohibit such practices and are handing out severe punishments to anyone who breaks the law. Killing a giraffe in Niger, for example, can result in a five-year prison sentence, with fines of more than 100 times the yearly income of a farmer. That represents a dramatic shift in mentality, considering that in 2004 the country’s president, Mamadou Tandja, requested that a pair of giraffes be captured and given to Togo’s long-standing dictator, Gnassingbé Eyadéma, as a gift. Giraffe meat, a delicacy cooked on giant skewers, has also been taken off the menu in restaurants that are frequented by tourists to reduce the potential of poachers trying to turn a profit.

Those who live near giraffes are also being convinced that it’s worth their while to help out. The Association to Safeguard the Giraffes of Niger is handing out loans to villagers living around the western town of Koure, who allow guides to bring visitors through the area to look at the animals. The revenue from the tours also goes toward building wells and planting trees so the giraffes can continue to prosper. In the wild, giraffes have no natural predators. With the human predators neutralized, there is reason to believe the population could swell to even greater numbers.