After seven months in jail, one member of Pussy Riot is still eager to court controversy 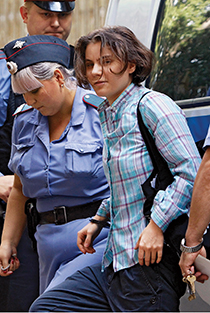 Yekaterina Samutsevich is a member of arguably the most famous musical ensemble ever to come out of Russia, but when not wearing a fluorescent balaclava and shouting, she’s easy to miss in a crowd.

Samutsevich is short and walks quickly, leaning forward with a hunched and self-effacing shrug in her shoulders. She wears a faded sweatshirt over an equally faded T-shirt and has her hair cut in the long-banged style that a teenaged skateboarder might have worn two decades ago. She seems a lot younger than her 30 years.

Her band, Pussy Riot, gained worldwide notoriety—and in Russia, a great deal of infamy—when its members stormed Moscow’s Cathedral of Christ the Saviour to stage a “punk prayer” protest song to show their opposition to Vladimir Putin and the increasingly close ties between the Russian president and the country’s Orthodox Church, which she says is an anti-feminist institution.

In the end, they were barely able to start before security was on them. Samutsevich didn’t even get her guitar out of its case—which probably saved her from a lengthier incarceration. She was convicted of “hooliganism motivated by religious hatred” and sentenced to two years in prison. But her sentence was suspended on appeal, and she was released in October, after almost seven months in jail. Her bandmates Nadezhda Tolokonnikova and Maria Alyokhina are still serving out their two-year sentences.

Sitting in a Moscow café with walls covered in photos of Soviet-era women heroes, and drinking hot chocolate in rapid spoonfuls, Samutsevich argues that the Russian authorities’ harsh response is part of a bigger campaign to slander and punish political artists.

Some 20 Russians who took part in a sanctioned anti-Putin protest in Moscow’s Bolotnaya Square last May have been charged with “mass unrest” and assaulting police. Most are currently in jail or under house arrest. One man, Maxim Luzyanin, co-operated with police and pleaded guilty. He has been sentenced to 4½ years in jail. Alexei Navalny, a protest-movement leader who has exposed numerous cases of corruption among Russia’s political elite, is also fighting charges of embezzlement. Many analysts believe these cases are politically motivated. Dissidents in Russia tend to encounter legal problems of one type or another.

Pussy Riot is comprised of around 10 women. Samutsevich, who studied at Moscow’s Rodchenko School of Photography and Multimedia, met some of the other band members at art exhibitions. She says they were inspired by the feminist punk movement of the 1970s, and the American ’90s band Bikini Kill. They chose the name “Pussy Riot” because of its intrinsic contrast: “pussy” objectifies women as soft and passive; “riot” is a reaction against that.

The band wanted to pursue the “art of activism” by staging creative and unexpected public events. They were particularly active during the run-up to last year’s presidential election that saw Putin returned to power. Last January, in Red Square, the band performed a song titled Putin’s Pissed Himself.

“We ruined the campaign a little bit,” she says. “It might have been some kind of personal grudge.”

Samutsevich says protesting inside the Cathedral of Christ the Saviour wasn’t a random act or the result of a flippant decision. They thought a lot about it. Patriarch Kirill, head of the Russian Orthodox Church, had called Putin’s presidency a “miracle of God,” and describes feminism as a dangerous phenomenon. “We needed to do it where Patriarch Kirill had stood,” she says.

Pussy Riot members didn’t expect such a strong state reaction. Some of them had been detained previously but were always released. Performing in a church might have been one step too far across an invisible line. But it’s more likely that a legal case against them was inevitable.

Still, Samutsevich says she has no regrets. “People ask us all the time if we would do it again,” she says. “Yes, we would.”

Samutsevich does worry about Tolokonnikova and Alyokhina, her jailed bandmates, and as the interview winds up, she guides the conversation back to them. Both have young children. Tolokonnikova was recently denied parole because she didn’t show remorse and refused to participate in some prison activities, such as the “Miss Charm Prison Camp 14” beauty contest. The judge did not allow the defence to make a closing argument. In her statement, which Tolokonnikova wrote but could not present, she said she would not admit guilt and lie for the sake of parole.

She added: “I am truly grateful to the people I have encountered in my life behind barbed wire. Thanks to some of them, I will never call my time in prison time lost . . . I will surely use my experience in [the penal colony] in my future work and, although this will not happen until completion of my sentence, I will implement it in projects that will be stronger and politically larger in scale than everything that has happened to me before.”