'He didn't think it was art,' organizer says of mistake that destroyed New York artist's work 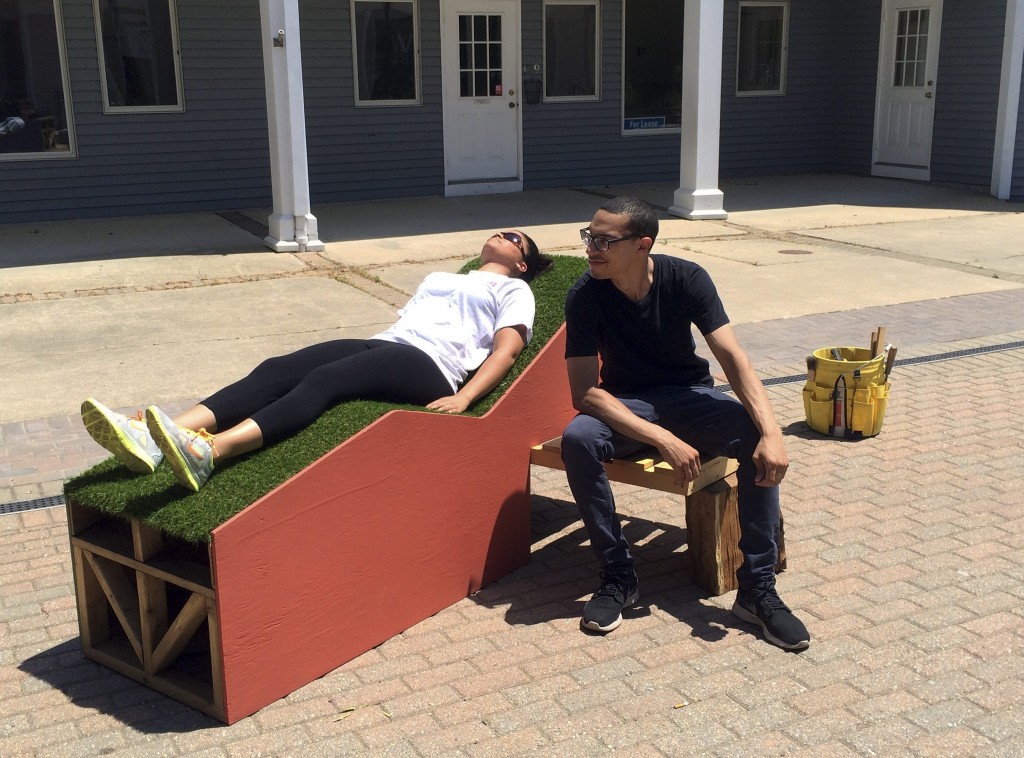 In this photo provided by New York City artist Jim Osman, his assistant Alex Reyes, right, sits beside a passer-by lying on the “Corbu Bench” that Osman installed in Madison, as part of the town’s 15th annual Sculpture Mile event. (Jim Osman via AP)

HARTFORD, Conn. — It was not the kind of public engagement that organizers of a contemporary art show had in mind: A wood and tile bench displayed in the shoreline town of Madison was removed, torn apart and put in a dumpster by a maintenance worker.

The piece, by New York City artist Jim Osman, was installed as part of the town’s annual Sculpture Mile event shortly before it went missing this week. The worker told organizers he used a hammer to take it down, believing it was not allowed in the plaza.

“He didn’t think it was art,” said William Bendig, founder and president of the Hollycroft Foundation, which sponsors the exhibition. “All he had to do was call us and we would have moved it.”

Bendig said a manager from the worker’s property management company told him that the employee believed the structure had been left behind by skateboarders. Bendig said the manager on Thursday offered financial compensation for the piece, valued at about $10,000, but the outraged Bendig has pressed for the worker to help put it back together.

The Sculpture Mile opened Monday for its 15th season with 22 works of art in Madison, a town of 18,000 people 100 miles from New York City. The event displays works by well-known American artists in styles from abstract to traditional.

Osman spent about a month creating his piece, a contoured bench topped with green artificial turf inspired by the designs of French architect Le Corbusier. It was completed two years ago and displayed previously in New York. Soon after setting up the 200-pound piece in Connecticut on Sunday, he said a half dozen people came over and sat on it.

“People congregate around it. It was so good to see the piece out in the world,” said Osman, who teaches art at The New School. “It’s kind of a big letdown.”

The employee from the real estate company, the Ciminelli Real Estate Corporation, declined to comment. The manager did not respond to a message seeking comment. A company spokeswoman, Anne Duggan, said it has reached out to the Hollycroft Foundation and “will be dealing directly with them on this matter.”

Bendig said owners of nearby spaces have been trying to find new tenants, and he heard there had been complaints about the piece, known as the “Corbu Bench.” Bendig said there may have been a breakdown in communication partly because he did not realize there was a change two years ago in the management for the local property.

The worker initially refused to recover the piece from the dumpster, saying it was covered with garbage, but he agreed to do so after the manager intervened, Bendig said. If the piece can be restored, Osman said, he will fix it.