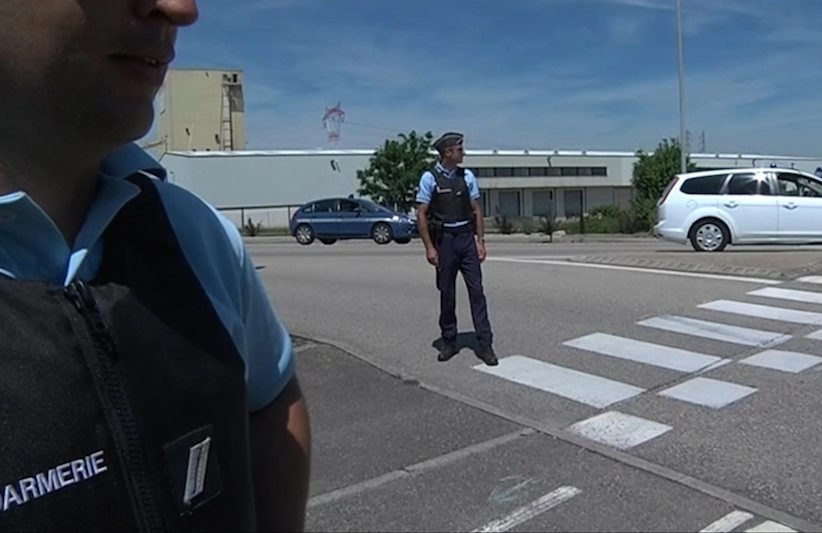 In this screen grab taken from video provided by BFM TV, police stand at the scene where a man was beheaded in Saint-Quentin-Fallavier. (BFM TV via AP)

SAINT-QUENTIN-FALLAVIER, France — An attacker with suspected ties to French Islamic radicals rammed a car into an American gas factory Friday in southeastern France, officials said, adding that a severed head and banners with Arabic inscriptions were found at the factory’s entrance. France immediately opened a terrorism investigation.

President Francois Hollande said the attack began shortly before 10 a.m. when a car made it through the gate of a gas factory in Saint-Quentin-Fallavier, southeast of Lyon. The car then plowed into gas canisters, touching off an explosion that injured two people, he said, speaking in Brussels.

“No doubt about the intention — to cause an explosion,” Hollande said, calling the attack “of a terrorist nature.”

French Interior Minister Bernard Cazeneuve said a man from the Lyon region who had been flagged in 2006 for suspected ties to extremists was seized by an alert firefighter. He said several other people were also taken into custody after the attack and authorities were trying to identify the victim whose severed head was at the gate and body was found elsewhere on the factory premises.

“People who could have participated in this abject crime are in custody,” he said.

Cazeneuve said the suspect had been known to intelligence services, who had him under surveillance from 2006-08. Still, the minister said the investigation had just begun and cautioned against jumping to conclusions.

It was not clear if French authorities were searching for any more possible accomplices.

The industrial site belongs to Air Products, an American chemical company based in Allentown, Pennsylvania. The company said all its employees had been accounted for and evacuated but did not say if any had been wounded.

“The site is secure. Our crisis and emergency response teams have been activated and are working closely with all relevant authorities,” the company said in a statement.

The severed head at the factory’s entrance appeared to be an echo of the Islamic State group’s practice of beheading prisoners and displaying their heads for all to see. A security official said two flags — one white and one black, both bearing Arabic inscriptions — were found nearby.

The official, who spoke on condition of anonymity because he was not authorized to release details to the media, said the victim was not decapitated by the blast.

France’s anti-terror prosecutor said an investigation was opened into the attack, and potential charges including plotting as part of “a terrorist group.” Cazeneuve said Friday that security has been heightened at religious sites around the country.

Hollande spoke after watching TV news reports about the attack with German Chancellor Angela Merkel as both attended a European Union summit in Brussels.

France went on high alert after attacks in January against the satirical newspaper Charlie Hebdo, a kosher grocery store and a policewoman that left 20 people dead in the Paris region, including three Islamic extremist attackers.

Since then, fears of copycat attacks have risen. One person was arrested in April after authorities said he was plotting to gun down people in churches in the Paris region.