For Americans looking to enter the booming, quasi-legal marijuana business, step one is pot class 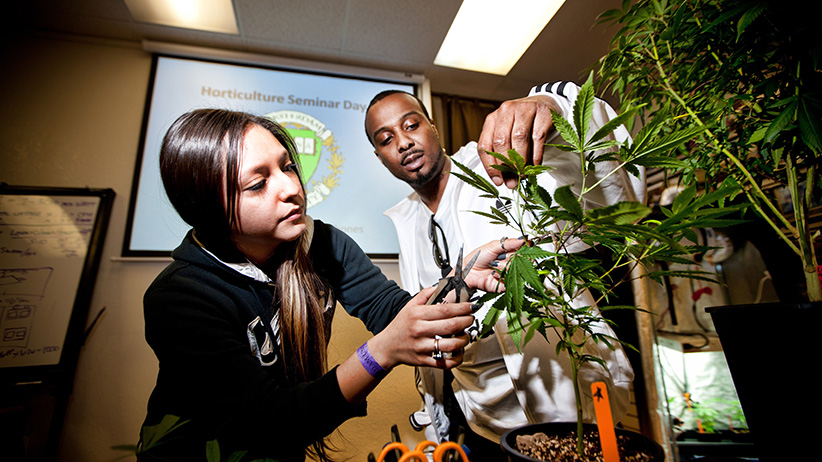 It’s a rare education seminar that includes this shot across the bow: “Everything and anything we’re talking about today is federally illegal—there is no grey area.” Yet that’s the warning that course facilitator Doug Porter issued to the dozen students attending a one-day workshop held by the Cannabis Career Institute (CCI) at a Baltimore airport hotel on a recent rainy Saturday. “I don’t want you to be negged out by this,” he said. “If you’re crossing your T’s and dotting your I’s, chances are you’ll never spend a day in jail.”

Welcome to America’s (sort of) legal marijuana business—the fastest growing industry in the U.S., showing 74 per cent market growth in 2014, to $2.7 billion. Medical cannabis is now legal in 23 states and the District of Columbia. Nine others have legislation pending and four states, along with D.C., allow for its recreational use.

So while Porter is right—the federal government classifies marijuana as a Schedule 1 drug that can’t be legally bought, sold, grown or possessed and with no currently accepted medical benefits—there is in fact plenty of grey area when it comes to pot in America. It’s in this grey area that CCI’s students are looking to set up shop. The seminar gave them an overview of the plant—for example, the difference between its sativa and indica strains—the legal hurdles involved in Maryland’s newly proposed regulations, the booming market for edibles and tinctures, and the basics of growing the plant itself.

Phil is a 26-year-old with a preppy fashion sense who’s looking forward to eventual full legalization. He wants to start “almost a craft brewery type of thing” for cannabis connoisseurs, experimenting with different hybrids. “To me, it’s an art form,” he says. There’s Marie, an engineer in her 50s, who sees her place in the industry as “either in education, teaching, or even as part of the peripheral [marijuana] economy. I can see myself getting together some people and opening up a testing lab, trying to ﬁgure out a new, innovative way to get this to people.”

And there’s Kal Shah, the only student comfortable giving a journalist his full name. He’s the furthest along in establishing himself in what will be Maryland’s new legal medical marijuana market, after taking a CCI course over a year ago. Shah’s a regular at Maryland’s Medical Marijuana Commission meetings, where the state is fleshing out the program’s details, and he showed up to the course seeking potential business partners in his venture.

Maryland is expected to start accepting applications for the limited number of licences it will issue later this year, and Shah is jockeying for the full trifecta that will provisionally be available—a grower’s licence, a dispensary licence and a licence to process products like tinctures, oils and edibles. It won’t be cheap. Maryland has set the biennial cost of a grower’s licence at $250,000, and $80,000 for a dispensary licence.

Shah, like most of the students at the CCI course, doesn’t fit the pothead mould. A self-described entrepreneur, Shah’s a web developer, a Subway restaurant franchisee and the co-owner of a liquor store in a suburban Maryland strip mall. But with restaurant profits being squeezed by the likes of Chipotle and fears that big-box stores will encroach on the liquor market, he set out to find the next big thing. “How many other industries, how many other opportunities will I have to do something new and groundbreaking? Pioneering?” he says. “This is my chance. I’m going to take it.”

The man behind CCI is Robert Calkin, 51, who Porter describes as the one-time “weed king of Hollywood.” Originally from Virginia, at just 13, in 1976, he helped organize a pro-pot rally on the National Mall in Washington. “We marched from the Lincoln Memorial to the White House, smoking marijuana the whole way, thinking, any time now, it’s going to be legal,” he says. He later moved to California and in 1988 started an L.A.-based pot delivery service whose clientele—at least according to Porter—included a host of celebrities. Calkin’s first foray into cannabis education was with Oakland’s Oaksterdam University, founded in 2007 and billed as the ﬁrst marijuana trade school in the U.S. and where he remains on the faculty.

It was in 2009, at the height of the recession, when Calkin saw a market for training that focused less on marijuana activism—Oaksterdam’s first-ever ad urged prospective students to “become a freedom fighter”—and more on the basics of “how can I get out of this humdrum job and get into this exciting new cannabis industry,” he says.

The company now hosts regular one-day seminars in various cities across the U.S., targeting places like Maryland where drug reforms are happening. “The idea behind a lot of stuff we’re teaching in the classes is ‘now is your time,’ ” he says. “We have a short window to get in here and be the little guy, build up a business so that it could potentially be bought out by the corporate interests in the future, or be competing for the corporate interests.”

Calkin says there are three types of people who sign up for CCI seminars—“the average Joe just looking for a job, trying to make himself attractive to the industry,” the “entrepreneurs who are coming in to create their own businesses, find investors, find workers,” and “the professionals, who are realizing that ‘Hey, I can add this to my toolbelt. I can be a green accountant, I can be a green lawyer.’ ”

Since 2009, the Obama administration has encouraged federal prosecutors not to target state-sanctioned medical marijuana businesses operating in accordance with state laws. In 2013, after Colorado and Washington legalized recreational pot use for adults, the federal Department of Justice deferred “the right to challenge their legalization laws at this time” as long as those states ensured compliance with their regulations.

But according to the National Cannabis Industry Association (NCIA), “some U.S. attorneys are openly defying this policy by continuing to threaten state-legal cannabis businesses with criminal action and civil-asset forfeiture.” Late last month, the NCIA spent two days on Capitol Hill lobbying members of Congress to smooth out the wrinkles between federal and state laws.

There’s some movement on that front. In March, the CARERS Act was introduced in the Senate, a bipartisan bill that would recognize pot as having medicinal value and would allow states with legal medical marijuana businesses to operate without federal interference. As it stands, something as simple as getting a bank account is a potential roadblock. Many major banks are hesitant to work with businesses involved in legal pot, over concerns it could place them in the federal government’s crosshairs. And due to a quirk in the Internal Revenue Code, legal marijuana businesses, many of which are small start-ups, can’t deduct normal business expenses on their federal taxes, thereby raising their tax burden.

For the students at CCI, none of that is proving a deterrent–though Shah, who’s used to government red tape from owning a liquor business, admits “the hoops you have to jump through for this are way, way different.”