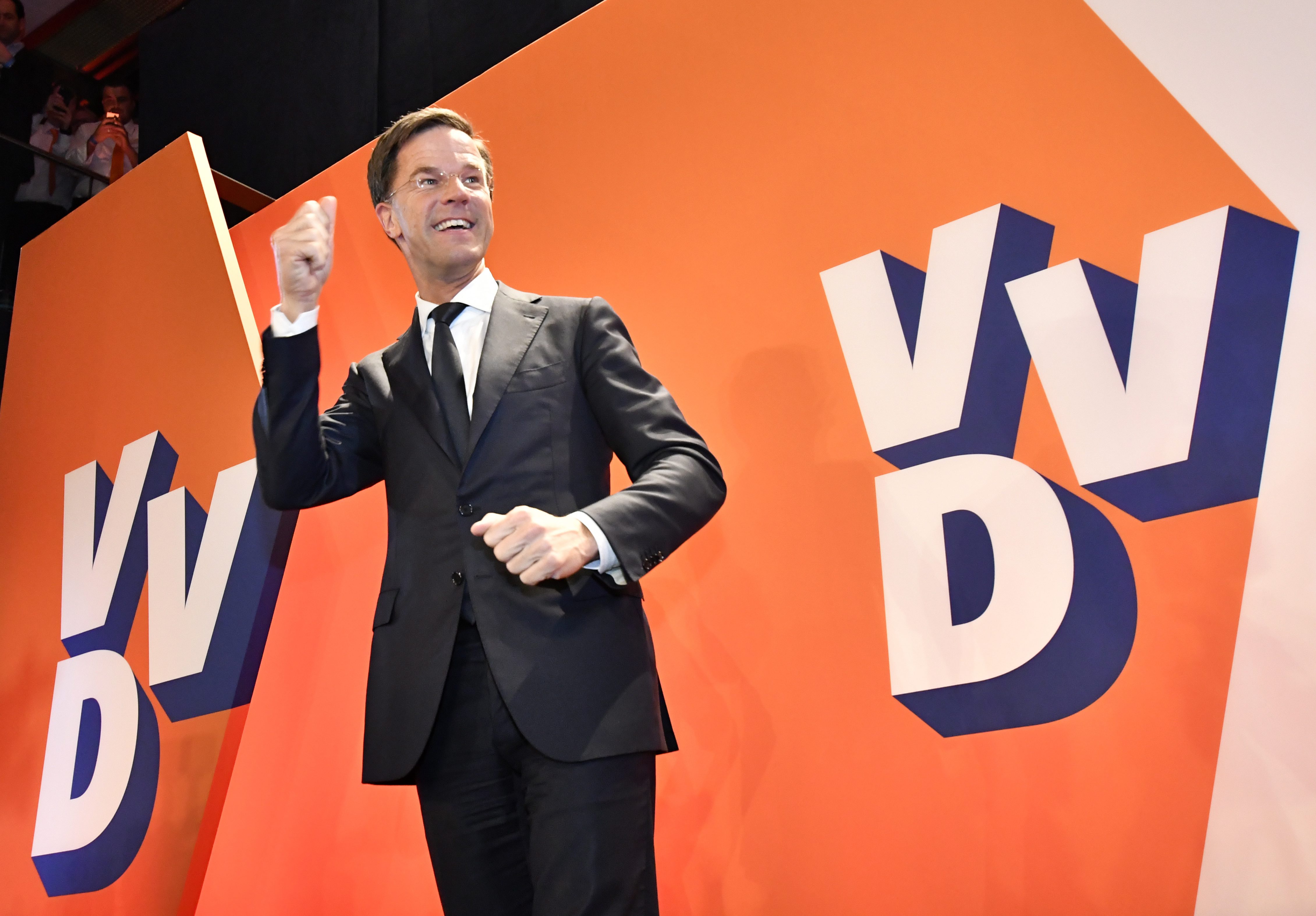 Provisional results with over half the votes counted suggested Rutte’s party won 32 seats in the 150-member legislature, 13 more than Wilders’ party, which took only third place with 19 seats. The surging CDA Christian Democrats claimed 20.

Following Britain’s vote to leave the European Union and Donald Trump’s election as U.S. president, “the Netherlands said, ‘Whoa!’ to the wrong kind of populism,” said Rutte, who is now poised for a third term as prime minister.

“We want to stick to the course we have—safe and stable and prosperous,” Rutte added.

Wilders, who campaigned on radical pledges to close borders to migrants from Muslim nations, close mosques, ban the Qur’an and take the Netherlands out of the EU, had insisted that whatever the result of the election, the kind of populist politics he and others in Europe represent aren’t going away.

“Rutte has not seen the back of me,” Wilders said after the results had sunk in.

His Party for Freedom clinched 24 seats in 2010 before sinking to 15 in 2012, and Wednesday’s total left him with about 12 per cent of the electorate, far less than populists in Britain and the United States have scored.

“Those are not the 30 seats we hoped for,” Wilders told reporters early Thursday, adding that he’d “rather have been the biggest party.”

Both France and Germany have elections this year in which far-right candidates and parties are hoping to make an impact.

French President Francois Hollande congratulated Rutte on his election success and his “clear victory against extremism.”

In Germany, Socialist leader Martin Schulz tweeted. “I am relieved, but we need to continue to fight for an open and Free Europe.”

Rutte, who for much of the campaign appeared to be racing to keep pace with Wilders, may have profited from the hard line he drew in a diplomatic standoff with Turkey over the past week.

The fight erupted over the Netherlands’ refusal to let two Turkish government ministers address rallies in Rotterdam about a referendum that could give Turkey’s President Recep Tayyip Erdogan more powers. It gave Rutte an opportunity to show his statesmanship by refusing to bow to foreign pressure, a stance with widespread backing in the nation.

“I mean this is your electoral campaign dream, right? You can’t script this if it was a movie,” Amsterdam Free University political scientist Andre Krouwel said. “It’s really helped Mark Rutte to take the lead and a big lead over Geert Wilders.”

Under brilliant skies, the Dutch went to vote in huge numbers, with turnout estimated to have reached at 82 per cent.

In a subplot of the elections, the Green Left party registered a historic victory, turning it into the largest party on the left wing of Dutch politics, together with the Socialist Party.

The provisional results showed the Greens leaping from four seats to 14 in parliament after a strong campaign by charismatic leader Jesse Klaver, who invites comparisons to Canadian Prime Minister Justin Trudeau.

It remains to be seen if the 30-year-old Klaver will take his party into the next ruling coalition, which looks likely to be dominated by Rutte’s VVD and other right-leaning parties.

The Labor Party of Eurogroup President Jeroen Dijsselbloem appeared to have been punished by voters in the election, plunging from 38 seats at the last election to just nine, according to the Ipsos exit poll.

Because of the result, it looked unlikely Dijsselbloem would be able to hang on to his post of leading the 19-nation Eurogroup, which manages the currency of the European Union nations that use the euro.

Rutte had framed the election as a choice between continuity and chaos, portraying himself as a safe custodian of the nation’s economic recovery and casting Wilders as a far-right radical who was unprepared to make tough decisions.

Although he drove through unpopular austerity measures over the last four years, the Dutch economic recovery has gathered pace and unemployment has fallen fast under the prime minister.

Wilders, meanwhile, attempted to tap into discontent among voters who said they were not benefiting from the economic recovery.

Even if his party had placed first in the election, Wilders stood a remote chance of becoming prime minister in the Netherlands, where a proportional representation system all but guarantees coalition governments.

The main political parties, including Rutte’s, had ruled out forming a coalition government with the Party for Freedom.

The left-leaning Dutch Labor Party appeared to be hammered by its supporters for its role over the last four years in pushing through a tough austerity package as junior member in a two-party Cabinet with Rutte’s VVD.

The coalition Rutte’s VVD party had with Labor can no longer be replicated and the prime minister is likely to look to the right for new coalition partners.

Rutte has been resolute about not wanting to share power with Wilders, so that tightens the market in which he can acquire the necessary 75-seat threshold.

Weeks, if not months of coalition-building talks may be required before a new government is installed.