By The Associated Press February 5, 2015 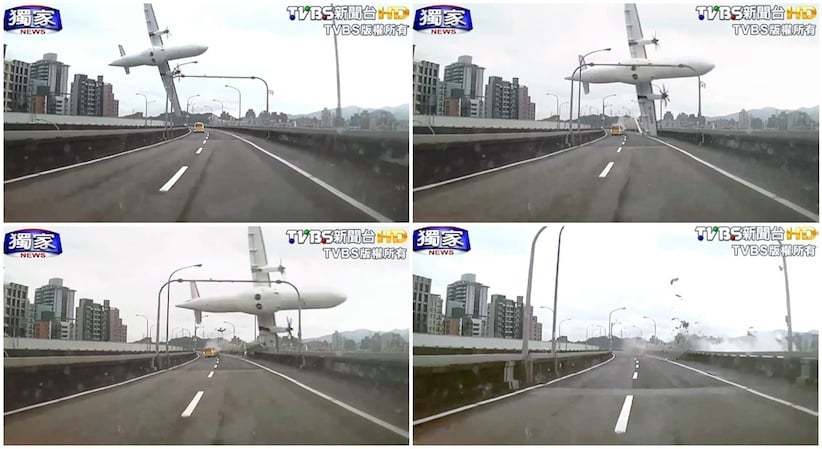 TAIPEI, Taiwan — Moments before the TransAsia Airways propjet banked sharply and crashed into a river, one of its pilots said, “Mayday, mayday, engine flameout,” according to a Taiwanese aviation official.

“Engine flameout” refers to flames being extinguished in the combustion chamber of the engine, so that it shuts down and no longer drives the propeller. Causes could include a lack of fuel or being struck by volcanic ash, a bird or some other object. “Mayday” is an international distress call.

At least 32 people on board the ATR 72 were killed and 15 survivors were injured in the crash in Taiwan’s capital, the latest in a series of aircraft disasters befalling Asian airlines. Divers were searching in the river for the remaining 11 people on board, including the two pilots. The plane’s black boxes were found overnight.

Video images of Flight 235’s final moments in the air captured on car dashboard cameras appear to show the left engine’s propeller at standstill as the aircraft turned sharply, its wings going vertical and clipping a highway bridge before plunging into the Keelung River in Taipei minutes after take-off Wednesday.

An audio recording of the pilot’s communications with the control tower at takeoff and during the brief, minutes-long flight were widely broadcast. A Taiwan Civil Aeronautical Administration official who spoke on condition of anonymity confirmed the distress call and its wording Thursday, but did not say how it might relate to a cause for the crash.

Among the injured was Huang Jin-sun, a 72-year-old passenger who said he tried to help others struggling in the river outside the wreckage.

“I saw others are drowning,” he told the ETTV broadcaster from his bed at Tri Service General Hospital in Taipei. “If I did not move quick enough to help them, soon they would be dead.”

He suspected trouble with the flight from the start.

“I felt something was not right after the plane took off,” he said. “I said to the woman next to me to buckle seatbelts, hold on to the seat and cover our heads. I (had) just finished saying it and then plane went down.”

About 10 Taipei fire agency divers were looking for any more bodies that may be at the cold river bottom. A crane was used to bring the rear section of the plane to the shore Wednesday night. The fuselage of the turbo-propeller jet was largely dismantled by hydraulic rescue tools and now lay alongside recovered luggage.

At midday Thursday, about a dozen relatives of Taiwanese victims arrived at the riverbank in the capital to perform traditional mourning rituals. Accompanied by Buddhist monks ringing brass bells, they bowed toward the river and held aloft cloth inscriptions tied to pieces of bamboo meant to guide the spirits of the dead to rest.

Relatives of some of the 31 passengers from mainland China reached Taipei on a charter flight Thursday afternoon.

Taiwan President Ma Ying-jeou visited two Taipei hospitals Thursday to check on the recovery of people injured in the crash and stopped by a morgue to comfort relatives who were examining bodies of crash victims, his office said.

“This kind of air safety incident not only wrecks countless happy families but also affects trust in our tourism climate among tourists from outside Taiwan,” Ma’s office said in a statement on the visits, a reference to the 31 mainland Chinese passengers. “We must undergo this bitter experience and make all-out improvements.”

Police diver Cheng Ying-chih said search and rescue efforts were being hampered by “zero visibility” in the turbid river and cold water temperatures that were forcing divers to work on one-hour shifts. He said the front of the plane had broken into numerous pieces, making the job all the more difficult.

The pilots’ actions in the flight’s final moments have led to speculation that they attempted to avoid high-rise buildings by following the line of the river and then banked sharply in an attempt to bring it down in the water rather than crash on land.

Taipei Mayor Ko Wen-je praised pilot Liao Chien-tsung as a hero for having avoided crashing them plane into buildings or major infrastructure.

“We really have to thank that pilot,” Ko said. “He really tried his hardest.”

Both the administration and Taipei-based TransAsia Airways declined to speculate on causes for the crash at about 10:55 a.m. Wednesday near the downtown airport.

The ATR 72-600 is the most modern version of the plane, and the pilot had 4,900 hours of flying experience, said Lin Chih-ming of the Civil Aeronautics Administration.

The plane has a generally good reputation for safety and reliability and is known among airlines for being cheap and efficient to use, said Greg Waldron, Asia managing editor at Flightglobal magazine in Singapore. About 1,200 of the planes are currently in use worldwide.

A team from ATR, a French-Italian company based in Toulouse, France, was being sent to Taiwan to help in the investigation.

The crashed aircraft, less than a year old, had once changed an engine, TransAsia Airways Vice-President Wang Cheng-chung told a news conference Wednesday. He said the original one was returned to the manufacturer, Pratt & Whitney Canada, after a glitch was found.

“P&WC gave a complete, brand new engine to TransAsia … and installed it for us,” Wang said.

The engine was replaced in April before the aircraft went into use, an airline publicist said.

The accident is one of a string of aviation disasters to strike Asian carriers.

On Dec. 28, low-cost airline AirAsia lost its first plane in the Java Sea with 162 people on board. In July, another ATR 72 operated by TransAsia crashed in the outlying Taiwan-controlled islands of Penghu, killing 48 at the end of a typhoon.

Malaysia Airlines has lost two planes in tragic circumstances: One plane carrying 298 people was shot down over rebel-held eastern Ukraine in July, and four months earlier Flight 370 disappeared on a flight from Kuala Lumpur to Beijing in one of aviation’s most confounding mysteries. No trace of the plane with 239 people aboard has been found.

Also among the survivors of Wednesday’s flight was a family of three, including a 2-year-old boy whose heart stopped beating after three minutes under water. He recovered after receiving CPR, his uncle Lin Ming-yi told reporters.