Meet the dancer whose Michael Jackson tribute is brightening Baltimore

Dimitri Reeves took to the tense streets of Baltimore and tried to calm things the only way he knew how: with the power of music and dance 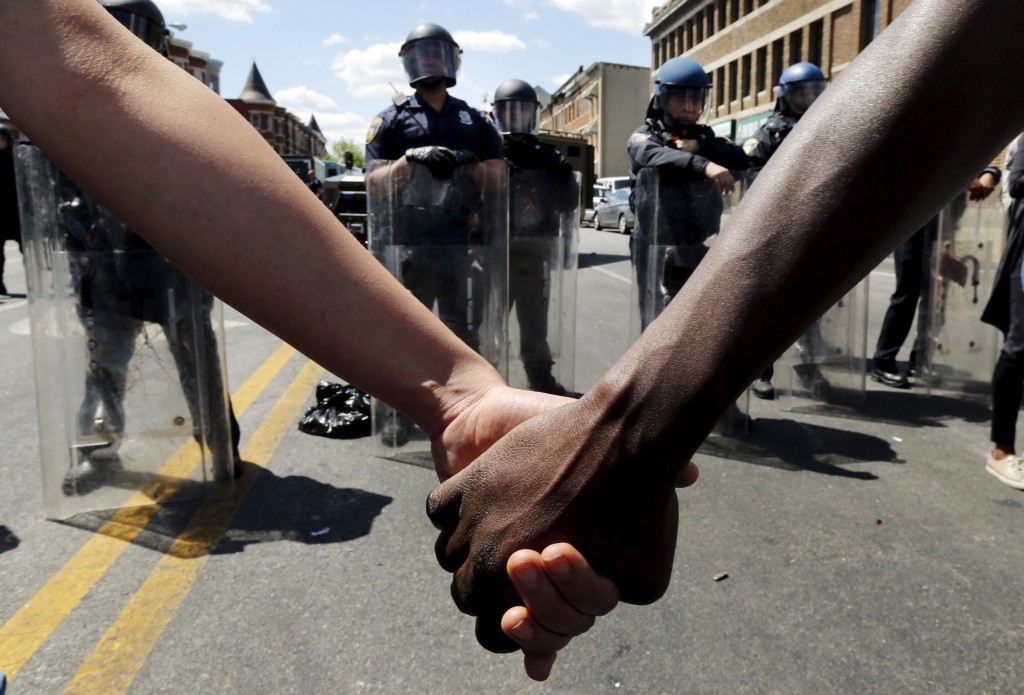 Members of the community hold hands in front of police officers in riot gear outside a recently looted and burned CVS store in Baltimore, Maryland, United States April 28, 2015. (Jim Bourg/Reuters)

There weren’t many moments of brightness in Baltimore on Monday, where the simmering anger from the funeral of Freddie Gray—who died in mysterious circumstances while in Baltimore police custody—turned a peaceful protest into a riot, complete with looting and fires. More than 200 people have reportedly been arrested, with more than a dozen officers reportedly injured; the mayor declared a state emergency, with the National Guard deployed.

But one man sought to bring positivity amid the negative. Dimitri Reeves, a 22-year-old Baltimore resident who has been singing and dancing all his life, became something of a social media celebrity when his tribute to Michael Jackson, complete with music and dead-on moonwalking, were captured online, bringing a measure of calm and joy during a city’s difficult moment.

Chaos all around him, and Michael Jackson dancer busted out the meanest moonwalk of all time #Baltimore pic.twitter.com/FcXWoM3Jns

The Thrill, Maclean’s pop-culture podcast, caught up with Reeves before he was set to return to the streets and perform. “Even if it’s a drop in the ocean, I don’t care,” he said in the interview. “I’m just trying to help in whatever way I can, because I care about Baltimore.” He spoke about dancing up to a line of riot police, why he went out there, what Man in the Mirror means to him, and the ongoing situation in Baltimore.

Listen to this segment as part of our weekly pop-culture podcast The Thrill—subscribe free, on iTunes, Stitcher, or Beyondpod, out every Friday!