Melinda Gates on fighting for women, access to contraception and what makes her angry

The co-chair of the Bill & Melinda Gates Foundation talks to John Geddes about her new book, philanthropy and focus on empowering women 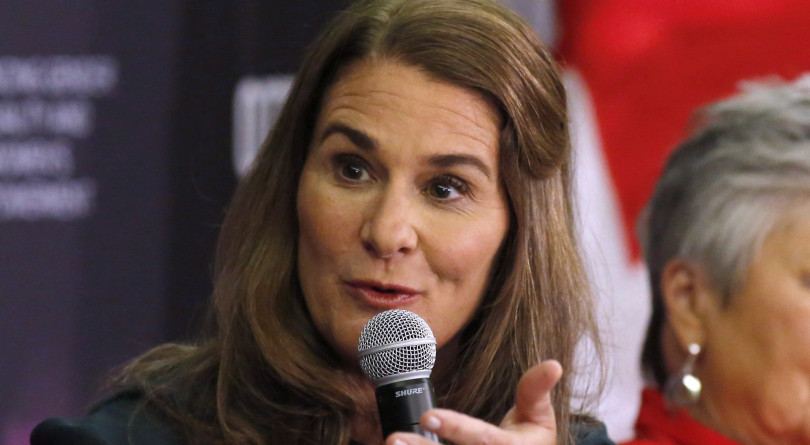 Gates speaks at a panel discussion as part of the Gender Equality and Women Empowerment Summit in Ottawa on April 26, 2018 (THE CANADIAN PRESS/ Patrick Doyle)

Melinda Gates is the co-chair of the Bill & Melinda Gates Foundation, the private philanthropy that grew out of her famous husband’s software fortune. Her new book, The Moment of Lift: How Empowering Women Changes the World, draws on the foundation’s work trying to improve the lives of women and girls in some of the poorest countries. But she also writes about her marriage and experiences as a woman in the male-dominated tech sector. Gates spoke with Maclean’s before her participation in this week’s Women Deliver 2019 Conference in Vancouver.

Q: Your book is a combination of memoir and call to action for lifting up women around the world. You must have anticipated that critics would see your life as too remote from the experiences of most women for those two parts to fit together. Why did you feel the need to link your own experiences with those reflections on the wider challenges facing women?

A: I write about so many women around the world. Their lives have animated my life and called me to action in the work that I do. I thought I also needed to share what I have learned and how far we’ve come or haven’t come, quite frankly, in the United States. And I felt it was important to share my personal story, so people know that in all of our marriages, and all of our homes, we have to look at our own lives and say, ‘How far have I come? What is it I want from my own life?’ So I wanted to share my own story so people could relate to me and not see me as whatever label people might put on me, because I’m married to Bill Gates and whatever wealth we have. No, all women face these issues.

Q: You write about the centrality of the Catholic church to you and to your parents. Your stand through your foundation’s work in favour of making contraception readily available, especially in developing countries, caused a rift between you and the church years ago. As you revisit that issue, have you heard feedback from Catholics on that part of the book?

READ MORE: The Interview: Bill Gates on philanthropy and optimism

Q: I imagine if you asked a lot of people what women in very poor countries most need, they might say access to clean water, or health care, or education or housing. But you stress access to contraception. Can you explain that?

A: If a woman can’t plan and space her births, you automatically lock her into a cycle of poverty. In low-income countries, if she has birth after birth after birth, she can’t begin usually to both feed her children and educate them. So you’ve locked her and her daughters into the next cycle of poverty—she might find a way to get one or two of her sons into school. There’s no country in the world that made the transition from low- to middle-income without allowing voluntary access to contraceptives. That’s just a fact. Bill and I think of it this way: In all countries around the world, you have to start with health, then you have to get an education, then you get to live your full life and have productive work. Family planning fits in that health bucket—you have to start there.

Q: Given your last name, I’m guessing you have to tread carefully around American politics. But on this question of family planning, you’re pointedly critical of the policies of the current administration in the White House. Did you have anyone tell you not to write that, to stay away from U.S. domestic political controversy?

A: When it comes to me advocating, where can I best use my voice for women all over the world? There are not many women advocating for women in lower income countries at a global level, so my first and foremost priority is that. In addition, though, the U.S. is the biggest funder of foreign aid, so there’s no chance I won’t advocate for foreign aid. This administration put forward a budget that cut contraceptives substantially. So, I am absolutely going to say, and have said, that is just absolutely wrong.

Q: Congress pushed back on that, but on the Trump administration’s proposals to cut funding for contraceptives internationally through the UN Population Fund and domestically through providers like Planned Parenthood, you write, “Most of the work I do lifts me up, some of it breaks my heart, but this just makes me angry.”

A: Targeting poor women in this country—that makes absolutely no sense to me. If you want a poor single mom who lives, for example, in the South, to be able to raise her children and have them well-educated, you have to have a social safety net and help give her those services of contraceptives. So, to me, those are senseless policy and funding decisions.

Q: Men don’t always come off very well in your book. You quote Marilyn Waring, a feminist author from New Zealand, to the effect that men won’t easily give up having half the population work for next to nothing. Put that way, the status quo sounds deeply entrenched. Do you ever worry that your own quite conciliatory voice might be too mild for the social, political and economic challenge you’re addressing?

A: I have to think carefully about exactly when, where and how to use my voice. I think in some sense, at least in the U.S., feminism got labelled as something by, you know, the older generation. I want to make sure we’re walking this line in a way that brings everybody together. I work with amazing men. I have an amazing son and husband and father-in-law and dad. I have had amazing male advocates in my life, like Warren Buffett. I look for men who are enlightened and are for women. I need to make sure that they want to be part of this. Men do still hold—it’s just the truth–many of the positions of power around the world. So, you have to bring them into the conversation, and I don’t think you bring them in by doing it with anger.

Q: What are you looking forward to in Vancouver?

A: Women Deliver is one of the places where we try to make sure gender equality stays at the very top of the agenda. Gender equality is complex, but we know that in any society in the world to grow up as a girl, you’re already behind the curve the day you are born. There’s no silver bullet. I think there will be something like 9,000 partners at the conference talking about these issues. But I do think we’re actually making progress, which has a lot to do with finally investing in data, and starting to know where you have to invest to tackle these issues.

Q: The last time you spoke with Maclean’s, our focus was your work co-chairing the Group of Seven’s Gender Equity Advisory Council, an initiative proposed by the Canadian government when it hosted the G7 last year. Are you satisfied with the way the council’s work is carrying on, now that France is chairing the G7 and hosting its summit late this summer?

A: There was a really purposeful hand-off from Prime Minister Justin Trudeau to President Emmanuel Macron. One of the specific things that has come out of that work is that the G7 finance ministers are now going to invest in digital financial services. I said there’s no silver bullet. Contraceptives are one piece of it. Another piece that lifts women up, we know from good research, is when they have money in their hands. So, investing in the digital finance services that are taking root in Kenya, Tanzania, Bangladesh, the Philippines—the fact that the G7 will take that up, and put funding behind it, means the advocacy that started in Canada will continue on in France.

(This interview was edited for length and clarity.)