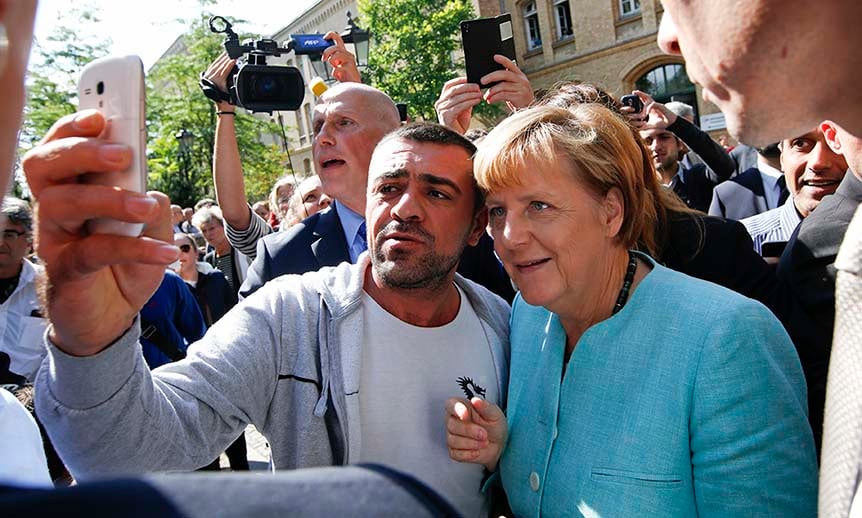 BERLIN — Chancellor Angela Merkel said Monday she would stick to her course in Europe’s migrant crisis following state elections that sent conflicting signals about Germans’ opinion of her liberal approach and highlighted divisions in her conservative bloc.

Merkel acknowledged that Sunday’s three elections, which produced painful losses for her conservative Christian Democratic Union, were dominated by the migrant issue and many voters believed there is “no conclusive and satisfactory solution.”

However, “I am firmly convinced, and that wasn’t questioned today, that we need a European solution and that this solution needs time,” Merkel said after party leaders met in Berlin.

Related: Charity toward refugees sinks in tide of humanity

The nationalist, anti-migration Alternative for Germany, or AfD, powered into three state legislatures after campaigning against Merkel’s welcome for last year’s huge influx of migrants.

That made clear a sizeable minority is uneasy about Merkel’s policies. AfD attracted people who didn’t previously vote, and took votes from established parties.

But many viewed the overall outcome as a sign of support for her approach.

Gero Neugebauer, a political scientist at Berlin’s Free University, said that Merkel’s “refugee policy was supported by the majority of voters,” even if they ended up voting for other parties.

Merkel’s CDU lost two states it had hoped to win back from centre-left incumbents. They included Baden-Wuerttemberg, an economic powerhouse and longtime conservative stronghold where the CDU embarrassingly finished second behind the left-leaning Greens.

Victory there went to governors who often sounded more enthusiastic about her migrant policy than Merkel’s own candidates — whose poll ratings slid after they tried last month to put cautious distance between themselves and the chancellor by calling for daily refugee quotas. That came on top of months of attacks from Merkel’s allies in Bavaria’s Christian Social Union, who want a national cap on refugee numbers.

“The central reason (for the losses) is refugee policy — there is no point in talking past it,” said Bavarian governor Horst Seehofer, Merkel’s most prominent internal critic of recent months. He called the results a “political earthquake.”

“The answer to the population after such an election result cannot be that everything continues as it was,” he added.

Merkel appeared unmoved, disputing Seehofer’s contention that the conservative bloc faces an “existential” threat from AfD’s rise and reiterating that she can’t go into negotiations with Turkey on stemming the migrant flow with a national refugee limit. She added that differences between the CDU and Seehofer’s CSU are “always hard to bear” for conservative voters.

“It is good that there is approval from society as a whole but … I would like my party, the CDU and CSU as a whole, to discuss such questions in great unity,” she said.

Merkel insisted last year that “we will manage” the challenge of integrating migrants, and Germany registered nearly 1.1 million people as asylum-seekers. While her government has tightened asylum rules, she still insists on a pan-European solution to the migrant crisis, ignoring demands for unilateral national measures.

The largely liberal rhetoric remains in place, but other countries’ border closures have lately reduced the migrant flow to a trickle and Merkel has made clear she doesn’t plan to bring to Germany refugees now stuck in Greece. Still, she has criticized the unilateral border closures, and said Monday “you can see every day from the photos from Greece that the solution isn’t so sustainable yet.”

Saxony-Anhalt’s conservative governor Reiner Haseloff, who won Sunday’s election in his eastern state but saw AfD finish in second place, pointed to New Year’s Eve assaults in Cologne blamed largely on foreigners as a turning point for that party’s ratings. “We saw on New Year’s Eve what parallel societies look like, and that influenced a great many people in Saxony-Anhalt,” he said.

Neugebauer said “doubts will persist in parts of her own party” over Merkel’s approach. But after Sunday’s results, “a discussion will start in the CDU as to whether it’s worth agitating against Merkel on refugee policy _ and it won’t happen, because they know they will lose.”

That gives Merkel some security, he said, but in order to calm her party and reduce AfD’s support she will need to redouble efforts at home to better manage integration and accommodation of refugees.

AfD now has seats in half of Germany’s 16 state legislatures and the European Parliament.

It now has its sights set on entering the national parliament in an election expected late next year. If it can establish itself as a long-term force, that will leave Germany with a six-party system — compared with three in the 1970s — making it ever-tougher to form governments.