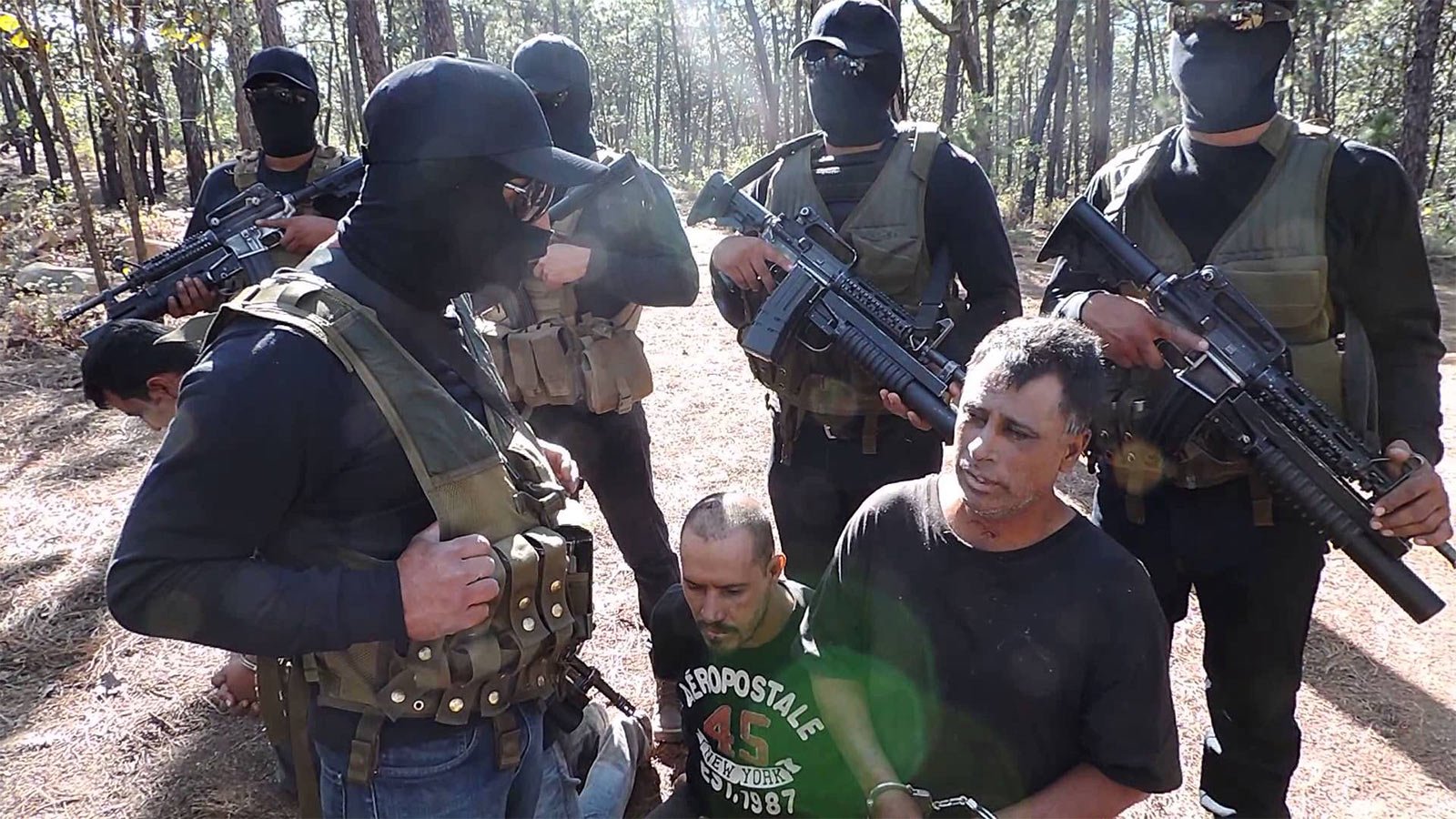 Members of the Jalisco New Generation cartel (CJNG) record themselves with prisoners from a rival cartel. YouTube

In the mountains of Mexico’s northern state of Sinaloa, where many of the country’s most notorious drug lords were born and bred, many call him el viejón, the old guy. It is a term of endearment for Joaquín Archivaldo Guzmán Loera, the world’s most wanted criminal and leader of the powerful Sinaloa drug trafficking cartel.

When last month he spectacularly escaped through a tunnel from what was supposed to be Mexico’s most secure prison, after his arrest in February last year, Guzmán was either 58 or 60 years old, depending on the source. In spite of his advanced age, he still commands significant fear and respect in the state where he was born.

But ‘El Chapo’ (‘Shorty’), as he is more widely known for his short and stocky posture, has also become somewhat of a relic. Many consider him to be one of the last traditional Mexican drug lords still alive and at large in a criminal underworld increasingly dominated by ruthless killers.

Guzmán rose to prominence in the 80s and 90s in a crime scene far less turbulent than it is now. First operating as a member of the then all-powerful Guadalajara Cartel, Guzmán slowly but surely carved out his criminal empire by trafficking drugs to the United States. He gained a reputation as a drug lord who would sooner corrupt than kill.“Chapo has always been more diplomatic in conducting his business”, says Raúl Benítez, a political scientist and security expert at the National Autonomous University of Mexico (UNAM). “He guarantees his operations by doing business with politicians to secure trafficking routes and businessmen to launder money.”

That modus operandi used to be the norm in Mexico, but times are changing. When former president Felipe Calderón declared war on organized crime in December 2006, seven major cartels controlled the country’s lucrative drug trafficking routes to the U.S. Calderón’s administration deployed thousands of soldiers and federal police to hunt down the leaders of those groups. Known as the ‘Kingpin Strategy’, it was aimed at toppling the cartels’ structures by cutting off the head of the snake and is largely continued by Calderón’s successor Enrique Peña Nieto.

When Peña Nieto entered office in 2012, his administration compiled a list of 122 priority targets among the country’s crime lords. Only 30 of them remain at large now. According to both Mexican and U.S. authorities, most major crime groups in Mexico have now either collapsed or fractured. But with their demise, scores of smaller gangs have filled the vacuum, employing younger and far more violent gangsters than Chapo and his peers.

“As cartels are splintering, the armed wings are taking over”, says Mike Vigil, former Chief of Operation of the U.S. Drug Enforcement Administration (DEA). “The new narcos are mostly sicarios, hitmen, and all they know is violence. The drug trade is transforming from a business of traffickers to a business of killers.”

Indeed, violence in Mexico appears to be on the rise again. More than 100,000 people are estimated to have been killed in the often brutal gangland warfare waging for almost a decade now. And even though the number of killings went down somewhat in 2013 and 2014, more than 8,000 people were killed in the first six months of 2015—30 per cent more than in the same period last year. Most experts say the fragmentation of the underworld is to blame.

The new, smaller groups are also expanding their businesses beyond drug trafficking into other crimes such as kidnappings, extortion and even oil theft. Los Zetas, one of the country’s most violent gangs, is believed to make half of its money from activities other than drug trafficking.

With Chapo once again on the run, most experts don’t believe his organization will change its business model. Mexican and U.S. law enforcement agencies believe the Sinaloa Cartel to be active in more than 50 countries. And with most other major cartels crippled or defunct, it now dwarfs the competition as far as drug trafficking is concerned. “Chapo is aware that most other cartels are severely wounded, either by rivals or by government action,” says Vigil. “He knows that this is the time for the Sinaloa cartel…to take over the important locations in Mexico, especially the plazas that funnel drugs into the U.S.”

In a recent interview, Tomás Zerón, head of the federal Criminal Investigation Agency, told Proceso magazine that only two major cartels remain with their structures largely intact: the Sinaloa cartel and the upstart Jalisco New Generation cartel (CJNG). The latter has grown exponentially in recent years and has seemingly overtaken the production and trafficking of methamphetamines in the central states of Jalisco and Michoacán.

It is also far more aggressive than its Sinaloan counterpart. CJNG sent shockwaves through Mexico last spring, when its gunmen killed scores of federal policemen, set up dozens of road blocks in Jalisco state and even shot down an army helicopter.

But CJNG and Sinaloa appear to be allies  at the moment, and some observers believe the biggest challenge to Guzmán may come from within his own ranks. “The question is: could he reestablish control over less controlled operations? That will be a challenge,” says Malcolm Beith, author of the book The Last Narco, which chronicles the decades-long hunt for Guzmán. “You can liken it to a massive global company which splits off into factions. Could one CEO come back and put it all together again? I doubt it.”