An interview with Vladimir Putin: An exercise in control

Vladimir Putin sits down with The Canadian Press, among other outlets, in effort to cultivate image 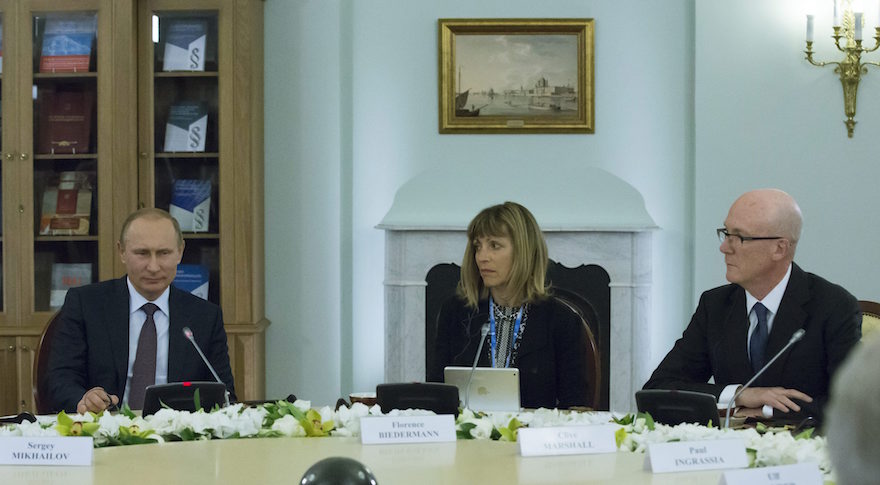 ST. PETERSBURG, Russia – When the heads of the world’s major news agencies sat down a year ago with Vladimir Putin at a St. Petersburg palace, they were treated to a long, sumptuous meal of Crimean flounder, a dish evidently chosen not only for its delicacy but for the political statement.

This year it was tea and caviar at the stroke of midnight in a wood-panelled library.

The Russian president had just completed a whirlwind of back-to-back meetings on the sidelines of his showcase economic forum, an event where he also delivered a marathon question-and-answer performance under the folksy moderation of CBS News journalist Charlie Rose.

He apologized for being hours late for the meeting with news agency heads.

If you talk to other world leaders or the Russian media, Putin is always late — a reflection perhaps of his punishing schedule as much as a demonstration of who is in charge.

Putin’s handlers and officials from the state-run news agency kept the news bosses busy with a tour of the presidential library and archive.

Even still, the dozen invited news executives, whose editors and journalists shape public opinion from Washington to Delhi, were given a photo-emblazoned library card granting them 100 years of access to the place.

The Canadian Press, The Associated Press, and Reuters were among the news services that took part.

Putin was relaxed and good-natured throughout the hour-long bid to cultivate his image — both at home and among an increasingly suspicious, if not outright hostile international audience.

But the self-assured and determined courting of news agency heads that typified the same exercise last year was replaced with a toned-down, sober air.

To Prime Minister Stephen Harper’s persistent criticism over Ukraine and suggested life-time ban from the G8, he started his answer by saying: “I don’t want to offend anyone.”

Yet, his overall messages were hardly conciliatory.

“If the United States says Russia should be returned to the G8, the prime minister will change his opinion,” Putin continued, following up his initial response with a pointed message.

With the euphoria of Crimea’s “return” dimming for a recession-weary public; a grinding, dirty little war on his western border; and the economic hemorrhaging of international sanctions and rock-bottom oil prices, the more subdued business-as-usual air is probably not surprising.

Yet, his dexterity in playing international foil was still clear with his wooing of fiscally wayward Greece — a flirtation that at the very least fractures the façade of European Union solidarity.

“If the EU wants Greece to pay its debts it should be interested in growing the Greek economy….helping it pay its debts,” he said, referring to a $2.7-billion pipeline deal announced as part of his economic forum. “The EU should be applauding us….What’s wrong with creating jobs in Greece?”

Unrepentant on Ukraine despite the economic isolation and international outlier status it has bestowed, Putin blamed President Petro Poroshenko for not delivering promised political reforms brokered at Minsk.

He blamed the West for a “coup d’etat” in Kyiv.

He was asked: Was there Russian corruption in the World Cup bid?

“If anyone has evidence, let them present it. We won it in a fair fight and are going to host the World Cup,” he said.

Putin’s beating of the patriotic drum and increasing control of the media has kept his approval rating in the stratosphere of near 80 per cent, despite growing economic hardship for the average Russian.

The control was evident when officials summarily pulled the plug on the live feed of his meeting with the news agency heads after the first question, an uncomfortable one from Agence France-Presse about the seizure of Russian government assets in France and Belgium in a dispute over the defunct oil giant Yukos.

The meeting was carried live on one of Russia’s 24 Hour news channels and it took several minutes for staff to replace the blank screen.

Putin aides told an upset Russian and international press corps that “some of the participants wanted it to be an off-the-record meeting.”

When the absurd notion of western news bosses agreeing to a closed-door meeting was challenged by international reporters, Putin’s handlers just shrugged.

By 1:15 a.m., the news agencies — still eager to keep the conversation going — turned to his personal life.

He spoke about having a full relationship with his daughters and “good relations with my ex-wife and plans for my future. I’m OK.”

The questions were going to keep coming, but looking at the time Putin asked: “Are you mad?”