By Trisnadi Marjan and Margie Mason, The Associated Press December 29, 2014 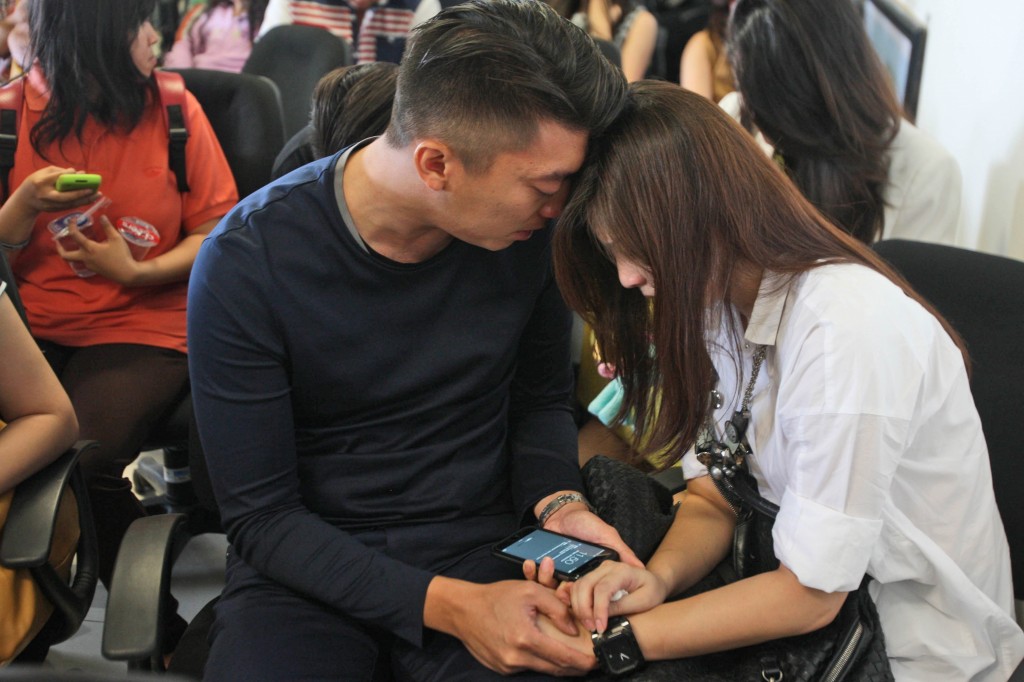 Relatives of the passengers of AirAsia flight QZ8501 comfort each other at Juanda International Airport in Surabaya, East Java, Indonesia, Sunday, Dec. 28, 2014. The AirAsia plane with 162 people on board lost contact with ground control on Sunday while flying over the Java Sea after taking off from a provincial city in Indonesia for Singapore, and search and rescue operations were underway. (AP Photo/Trisnadi)

SURABAYA, Indonesia — The plane sought permission to climb above threatening clouds. Air traffic control couldn’t say yes immediately — there was no room. Six other commercial airliners were crowding the surrounding airspace, forcing AirAsia Flight 8501 to remain at a lower altitude.

Minutes later, the jet carrying 162 people was gone from the radar. No distress signal was issued. It is believed to have crashed into Indonesia’s Java Sea on Sunday morning, but exactly what happened — and whether the plane’s flight path played any role — won’t be determined until after the aircraft is found.

Broad aerial surveys on Monday spotted two oily patches and objects in separate locations, but it’s unknown whether any of it is related to the missing Airbus A320-200.

The plane left Surabaya, Indonesia, but vanished halfway into what should have been a two-hour hop to Singapore. Officials on Monday saw little reason to believe the flight met anything but a grim fate.

“Based on the co-ordinates that we know, the evaluation would be that any estimated crash position is in the sea, and that the hypothesis is the plane is at the bottom of the sea,” Indonesia search and rescue chief Henry Bambang Soelistyo said.

The last communication from the cockpit to air traffic control was a request by one of the pilots to increase altitude from 9,754 metres to 11,582 metres because of the rough weather. The tower was not able to immediately comply because of the other planes, said Bambang Tjahjono, director of the state-owned company in charge of air-traffic control.

Sarjono Joni, a former pilot with a state-run Indonesian carrier, said the usual course of action when planes run into rough weather is to veer either left or right. A request to climb would most likely come if the plane was experiencing heavy turbulence or otherwise causing serious passenger discomfort, he said.

He added that heavy traffic is not unusual for any given airspace.

The twin-engine, single-aisle plane was last seen on radar four minutes after the final communication from the cockpit.

Search and rescue crews were looking for the plane with at least 15 ships, seven aircraft and four helicopters, national search and rescue spokesman Jusuf Latif said. Most are Indonesian but Singapore, Malaysia and Australia have contributed planes, and a ship and aircraft from Thailand were awaiting clearance from Indonesia’s Foreign Ministry.

Those numbers do not include Indonesian warships taking part in the search. Many fishermen from Belitung island also have joined in, and all vessels in that area of the sea have been alerted to be on the lookout for anything that could be linked to the plane.

Jakarta’s air force base commander, Rear Marshal Dwi Putranto, said an Australian Orion aircraft had detected “suspicious” objects near an island about 160 kilometres off central Kalimantan. That’s about 1,120 kilometres from the location where the plane lost contact, but within Monday’s greatly expanded search area.

“However, we cannot be sure whether it is part of the missing AirAsia plane,” Putranto said. “We are now moving in that direction, which is in cloudy conditions.”

Air Force spokesman Rear Marshal Hadi Tjahnanto told MetroTV that an Indonesian helicopter spotted two oily spots in the Java Sea east of Belitung island, much closer to where the plane lost contact than the objects viewed from the Australian plane. He said oil samples would be collected and analyzed to see if they are connected to the missing plane.

An Associated Press photographer flew in a C-130 transport carrier with Indonesia’s Air Force for 10 hours Monday over a large section of the search area between Kalimantan and Belitung. The flight was bumpy and rainy at times. It hovered low at 1,500 feet, giving clear visibility to waves, ships and fishermen, but there was no sign of the plane.

The disappearance and suspected crash caps an astonishingly tragic year for air travel in Southeast Asia, and Malaysia in particular. Malaysia-based AirAsia’s loss comes on top of the still-unexplained disappearance of Malaysia Airlines Flight 370 in March with 239 people aboard, and the downing of Malaysia Airlines Flight 17 in July over Ukraine, which killed all 298 passengers and crew.

How the AirAsia flight disappearance differs from MH370 tragedy
Photo essay: What remains of the lives lost in MH17
MH17: Could anything have saved that plane?

“Until today, we have never lost a life,” AirAsia group CEO Tony Fernandes, who founded the low-cost carrier in 2001, told reporters in Jakarta airport. “But I think that any airline CEO who says he can guarantee that his airline is 100 per cent safe, is not accurate.”

He refused to address compensation issues or any changes that may be made to the airline as a result of this incident.

“We have carried 220 million people up to this point,” he said. “Of course, there’s going to be some reaction, but we are confident in our ability to fly people.”

Ruth Natalia Puspitasari, who would have turned 26 on Monday, was among them. Her father, Suyanto, sat with his wife, who was puffy-eyed and coughing, near the family crisis centre at Surabaya’s airport.

Suyanto remembers the concern his daughter showed for the families of the MH370 tragedy. Puspitasari once told him how sad it must be for the victims’ relatives who were left waiting for their loved ones with no certainty.

“Now she is gone in the missing plane, and we should face this sorrow, I can’t believe it!” he said, tears rolling down his cracked cheeks. “This is too hard to be faced.”

He was still sleeping when Puspitasari left for the airport with her fiance and future in-laws for a New Year’s vacation. But he called her just before she boarded, and she told him excitedly that they planned to celebrate her birthday in Singapore.

“I don’t want to experience the same thing with what was happened with Malaysia Airlines,” he said as his wife wept. “It could be a long suffering.”

Few believe this search will be as perplexing as the ongoing one for Flight 370, where what happened onboard remains a total mystery. Authorities suspect the plane was deliberately diverted by someone on board and ultimately lost in a remote area of the Indian Ocean where the water is notoriously deep. Flight 8501 vanished over a heavily travelled sea that is relatively shallow, with no sign of foul play.

Flight 8501 had been airborne for about 42 minutes when it lost contact.

The plane had an Indonesian captain, Iryanto, who uses one name, and a French co-pilot, five cabin crew members and 155 passengers, including 16 children and one infant, the airline said in a statement. Among the passengers were three South Koreans, a Malaysian, a British national and his 2-year-old Singaporean daughter. The rest were Indonesians.

AirAsia said the captain had more than 20,000 flying hours.

At Iryanto’s house in the East Java town of Sidoarjo, neighbours, relatives and friends gathered Monday to pray and recite the Qur’an to support the distraught family. Their desperate cries were so loud, they could sometimes be heard outside where three televisions had been set up to monitor search developments.

“He is a good man. That’s why people here appointed him as our neighbourhood chief for the last two years,” said Bagianto Djoyonegoro, a friend and neighbour.

Many recalled him as an experienced Air Force pilot who flew F-16 fighter jets before becoming a commercial airline pilot.

His co-pilot, Remi Plesel, had been in Indonesia three years and loved to fly, his sister, Renee, told France’s RTL radio.

“He told me that things were going well, that he’d had a good Christmas. He was happy. The rains were starting, the weather was bad. It was raining a lot,” she said.