Can David Cameron and his Tories overcome their elitist image?

From a controversial budget to class-related gaffes, It's been a tough spring for the British PM 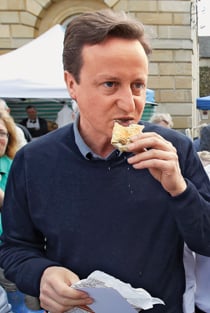 T.S. Eliot said April is the cruellest month, but David Cameron might want to add March to the list too.

The British prime minister’s spring from hell began late last month. First there was the unveiling of a controversial budget in which the chancellor of the exchequer, George Osborne, cut the top rate of income tax, the corporate tax level, as well as the child benefit for upper-middle-class families and tax breaks for pensioners—a sort of take-from-the-young-and-old-and-give-to-the-rich kind of budget that did little to dispel the Tories’ reputation as Britain’s ruling-class party.

But the real heat began the following weekend, when the Sunday Times, in an old-fashioned undercover sting, recorded party co-treasurer Peter Cruddas crudely boasting to a prospective donor that one could obtain “premier league” access to the PM over dinner in his private apartment at Downing Street in exchange for a donation of $320,000 to $400,000. The billionaire fundraiser promptly resigned and Cameron tried to smooth the whole thing over (first by refusing to release details of whom he’d recently invited to dinner, and later capitulating), but it was too late. After that the class-related gaffes rained down on a starving, gleeful media.

The privately educated Tory MP Francis Maude defended his boss by saying it was no one’s business who the prime minister chose to invite to his private “kitchen suppers”—a term used only by those apparently rich enough to afford a large, formal dining room, and for which Maude was promptly excoriated. Next came “garage-gate,” in which the same member told Britons to stock up on gas and perhaps store a jerry can of petrol in their garages in view of the looming strike. But the press leapt on this as well, pointing out that most Britons can’t afford a garage and, more crucially, that it’s illegal to store a 20-litre can of petrol at home.

Things took a turn for the truly bizarre when Osborne, while being questioned by a Labour MP on the finer points of his budget (specifically an increased tax on hot prepared foods), was asked on camera about the last time he’d purchased a pasty from Greggs—an iconic northern-English bakery chain known for its cheap and sweaty sausage rolls and meat pies. Osborne, the wealthy son of a baronet, did not even pretend to remember the last time he’d sampled such plebian fare, and simply laughed the question off. But the press was not amused, and many commentators accused the chancellor of being hopelessly out of touch—a British euphemism for “snob of the highest order.” That Osborne probably prefers to sup on chateaubriand rather than a chicken bake is not the issue. The same is certainly true of the prime minister in his notorious kitchen. What’s brutal is the way Cameron mishandled it. Rather than brushing the silliness aside, the PM interrupted an Olympics press conference to wax lyrical about his last pasty—bought from the West Cornwall Pasty Co. shop in the Leeds rail station (and a delicious one it was). The media again called foul when it was revealed that the outlet in Leeds closed several years ago. Opposition leader Ed Miliband then took the pantomime further by staging a photo op with his shadow chancellor Ed Balls at a Greggs outlet, about which a third Labour MP tweeted, “Just tucked in to a delicious sausage roll from Greggs in the car with @edballs and @edmiliband.”

Apart from encouraging the most juvenile sort of politics, the problem in this cluster of mini-scandals is the growing feeling that the Tories are less interested in the concerns of regular working people than in protecting the interests of the privileged minority from which so many of them hail. During last August’s riots, we learned they holiday abroad. Now they have dining rooms and garages. Even worse, they rarely eat junk food!

Superficial distinctions, perhaps. But look back to Bullingdon Club photos taken of Cameron, Osborne and London Mayor Boris Johnson in their waistcoats and tails at Oxford in the ’80s and ’90s, and it’s not hard to conclude the country is being run by a small coterie of rich prep-school boys who have each other’s backs and nobody else’s. Of course, this has always been true of Cameron’s Tories, so why is it coming home to roost now?

One reason is the economy. With youth unemployment high, the economy stagnating and bankers’ bonuses still being paid out in the hundreds of millions, there is an increased sense of class divide in Britain, a culture that has long been defined by its social divisions. Another is the ongoing phone hacking scandal and Leveson inquiry, and the creepily cozy relationships they have revealed between the police, the media establishment and political elites, including Cameron himself. There is a growing sense in Britain that, in order to survive, Cameron and his buddies must find a better way to appeal to the middle ground without completely alienating the party’s hard right, which also sees the leader as “hopelessly out of touch,” but for entirely different reasons.

Whether Cameron will manage to humanize his Eton-educated image before he next faces the polls remains to be seen. In any case, he should be careful how he goes about it. A diet of Greggs pasties will do little to hide those rosy, milk-fed cheeks.