Mohammed al-Nimr on his father's execution in Saudi Arabia

Nimr al-Nimr's son on last words with his father and what Saudi Arabia may do with armoured vehicles from Canada. 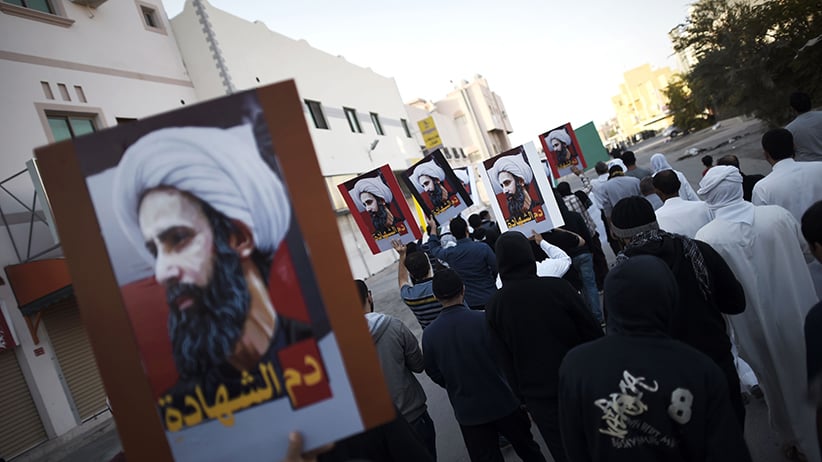 Bahraini protesters hold placards bearing portraits of prominent Shiite Muslim cleric Nimr al-Nimr during clashes with riot police in the village of Sitra, south of the capital Manama, on January 8, 2016, following a protest against his execution by Saudi authorities. (Mohammed al-Shaikh/AFP/Getty Images)

Mohammed al-Nimr is the son of Nimr al-Nimr, a Shia cleric and critic of the Saudi government whose execution (along with 46 others) this month on charges of terrorism triggered global outrage, the breakdown of diplomatic relations between Iran and Saudi Arabia and a sharp escalation in hostility between the two regional powers. Mohammed al-Nimr spoke to Maclean’s from the United States, where he has lived since 2010.

Q. When was the last time you saw your father?

A: A year and a half ago. There is a prison in Jeddah and he was in that prison. He could barely walk, even though he was injured two years earlier. They brought him in a wheelchair.

He was still injured from being shot in the leg when he was arrested?

It was not treated properly, and I think that was an intentional action. They wanted to make him suffer.

What did you talk about?

When we meet him as a family, he is just a father to us. He would ask us about our lives. He would just encourage us to make plans, to make our goals big and go as quick as we can to reach our goals. He would give us advice about life.

Had you spoken to him after that?

I spoke with him about a month and a half ago. He could make a local call, and my family in Saudi Arabia would call us and put the phones together so we could speak to him. He was always optimistic. He was always saying nothing would happen unless God wants that thing to happen. He was always trying to make us feel better. He was always telling us: If something is going happen, even if the whole world gathers to stop it, it’s going to happen, so don’t blame yourself.

How did you feel when you learned he was dead?

At first it was a big shock. It wasn’t easy at all. We are still deeply sad about what happened to him. But I have this feeling that he is in a better place right now, and they can’t reach him and torture him and bother him anymore.

Saudi Arabia says he founded a terrorist cell and advocated an armed insurgency against the government.

I have a simple response: Do they have any proof of that? All my father’s speeches are on the Internet. Anyone can go and hear them. If you want to make an accusation, they should bring at least one proof. They can’t.

What did your father do that angered the Saudi government so much?

He would say: Don’t use violence, because the government wants to provoke you so they will have a legitimate reason to shoot you. The government got mad because they want to use violence against people to make them quiet about their rights and their freedom.

He was a sectarian leader on some level though, wasn’t he? He was seen as being very much a Shia leader.

He was a Shia figure because he’s Shia. But he was not sectarian. He defended Shias and Sunnis on the same level. He always believed that sectarianism is just a division that the government created among people so the government could control both of them. It would make the Sunnis afraid of the Shias and it would make the Shias afraid of the Sunnis.

How are Shias treated in Saudi Arabia?

When I was in the second grade they would impose their religious beliefs on us—their ideology, Wahhabism. That belief says that we are non-Muslims and Wahhabism is the only correct way of Islam. That was a big shock for me as a kid. Imagine a kid in the second grade studying things that say you are not respected and your belief is wrong and basically your blood is not protected because your beliefs are not Islam.

Why did the Saudi government execute your father?

How do you feel about your father’s activities?

I’m proud of what he did. I believe we need more people like my father in our country so we can get ride of this tyrant.

Will there be others like him, or will his execution stifle dissent?

I do believe there’s going to be more people like him in the future. The government ignites people more and more with the execution. People now—not just in my country but around the world—can see what kind of ideology the Saudi government has, their intolerance of people who are different than them. Basically, they can’t tolerate anyone. And that intolerance is going to be spread all over the world. You can see al-Qaeda; you can see ISIS. They all have the same ideology: Wahhabism. And Wahhabism is the first ally of the Saudi government.

How should the outside world respond to your father’s execution, and to Saudi Arabia’s broader violations of human rights?

Any country that values freedom, justice and dignity and humanity for people should respond to that action by at least condemning the action.

Canada is selling $15 billion worth of weaponized light armoured vehicles to Saudi Arabia.

Even if they are going to bring a big profit, Canada should think who’s going to use these weapons and for what? Do they tolerate those actions? Do they have the conscience to live with that?

The Saudis have allegedly said they will not use these armoured vehicles against civilian populations.

How realistic is that concern—that the light armoured vehicles might be used against civilians in Saudi Arabia?

If any place has a serious movement against [the Saudi government], they are going to use [the weapons]. Nothing is going to stop them from moving them. They are brutal. They don’t care about human life.

Is there anything else you’d like to say about your dad?

Do you know how your father was killed?

They didn’t tell us that either.