Police say the man at the airport in Flint, Michigan pulled out a knife, yelled 'Allahu akbar,' and stabbed a security officer 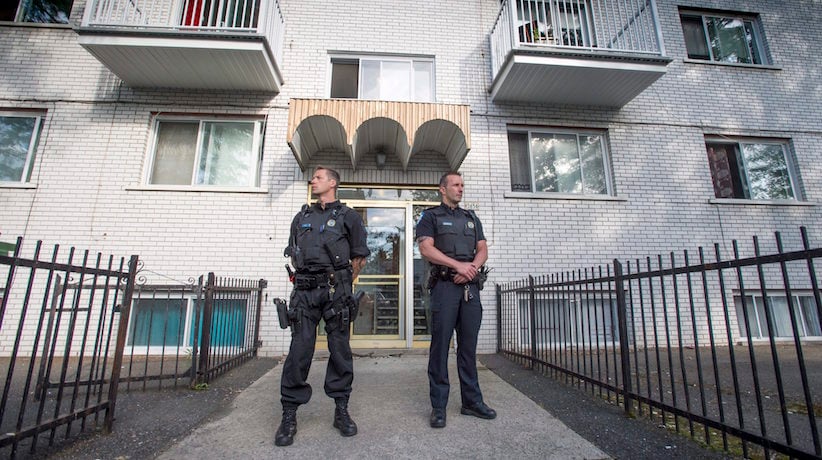 FLINT, Mich. — A Quebec man entered an airport in Michigan on Wednesday, yelled “Allahu akbar” and stabbed a security officer in the neck, according to U.S. federal prosecutors who said they are investigating the incident as an act of terrorism.

Amor Ftouhi, 49, was arrested shortly after the incident and was charged with committing violence at an airport, FBI special agent in charge David Gelios told a news conference.

Gelios said the incident happened at 9:45 a.m. at the Bishop International Airport in Flint, about 80 kilometres northwest of Detroit.

Ftouhi entered the United States legally in Lake Champlain, N.Y., on June 16 and made his way to Flint on Wednesday morning, he said.

“We do know Mr. Ftouhi entered the airport, he spent a little time on the first level, then he went upstairs he spent some time in the restaurant up there,” Gelios said.

“Then he came out, he was carrying baggage. He went into a restroom. He spent a little time in the restroom. Dropped both bags and came out, pulled out a knife, yelled ‘Allahu akbar,’ and stabbed Lt. Neville in the neck.”

Ftouhi appeared in federal court later Wednesday and heard the charge against him. He will get a court-appointed attorney and court spokesman David Ashenfelter said he will remain in custody until a bond hearing next Wednesday.

Authorities said there was no immediate indication Ftouhi was involved in a “wider plot,” but the investigation is in its early stages.

The criminal complaint says Ftouhi stabbed Neville with a large knife and declared “Allahu akbar,” the Arabic phrase for “God is great.” The FBI, which is leading the investigation, said Ftouhi said something similar to “you have killed people in Syria, Iraq, and Afghanistan, and we are all going to die.”

“As we progress and take this matter to grand jury for indictment, other charges could be pending later on,” Gelios said. “It’s an ongoing investigation, there are joint operations going on in Canada as we speak. We want to thank our Canadian partners who are helping us further investigate this attack.”

“There is complete co-operation between the RCMP and other Canadian authorities and agencies with all of their counterparts in the United States and we will do everything we possibly can to assist in this matter,” Goodale told reporters in Ottawa.

U.S. Attorney General Jeff Sessions said in a statement he was “proud of the swift response” by authorities from both nations.

He said the attack was being investigated as an act of terrorism and added it will be “prosecuted to the fullest extent of the law.”

Canadian TV footage showed police escorting at least one person away from a four-storey Montreal apartment building where the suspect is believed to have lived. There was a significant police presence outside the building.

City police spokesman Benoit Boiselle said officers with the department were assisting the RCMP in a search of the apartment.

He said the FBI requested the search after the attack.

Meanwhile, witnesses in Flint described seeing the suspect led away in handcuffs by police, Neville bleeding and a knife on the ground.

“The cop was on his hands and knees bleeding from his neck,” Ken Brown told local media.

Cherie Carpenter, who was awaiting a flight to Texas to see her new grandchild, told a local TV station she saw the attacker being led away in handcuffs. She described the man in custody as appearing “blank, just totally blank.”

— With files from The Associated Press.