More than 800 migrants land in Indonesia and Thailand

By By Niniek Karmini And Thanayrat Doksone, The Associated Press May 15, 2015 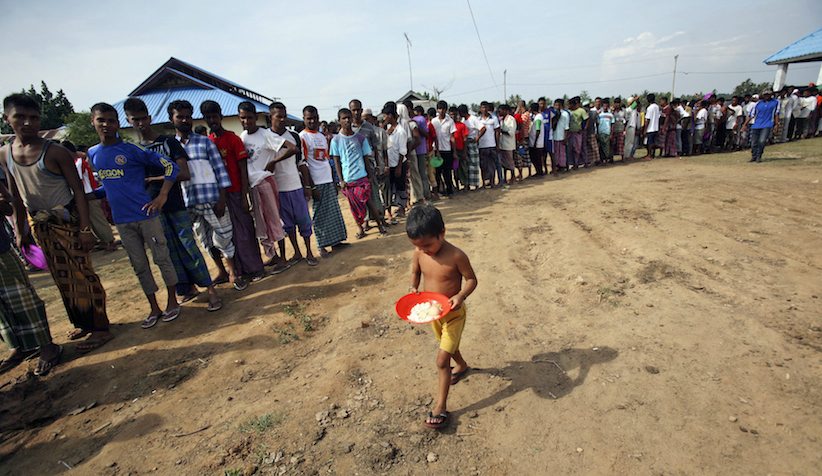 JAKARTA, Indonesia – More than 800 migrants have landed on the shores of Indonesia and Thailand after being adrift at sea for weeks, authorities said Friday. They are among the few who have successfully sneaked past a wall of resistance mounted by Southeast Asian countries who have made it clear the boat people are not welcome.

Several thousand refugees from Bangladesh and Myanmar – fleeing either poverty or persecution – are believed to be adrift on boats in the Andaman Sea in what has become a spiraling humanitarian crisis. In recent days, about 2,000 landed in Malaysia and Indonesia, but both countries then said they could not accept any more.

Fishermen, however, towed two boats to Indonesia’s eastern Aceh province early Friday – one with nearly 700 people and another carrying 47, police said. The larger boat was on the verge of sinking when fishermen brought it to the fishing village of Langsa, according to Lt. Col Sunarya, who like many Indonesians uses only one name. He said everyone aboard was weak from hunger and dehydrated.

“Some of the people told police they were abandoned at sea for days and Malaysian authorities had already turned their boat away,” Sunarya said.

Separately, the Thai navy found 106 people, mostly men but including 15 women and two children, on a small island off the coast of Phang Nga province, an area known for its world-class scuba diving.

“It’s not clear how they ended up on the island,” said Prayoon Rattanasenee, the Phang Nga provincial governor. The group said they were Rohingya migrants from Myanmar. “We are in the process of identifying if they were victims of human trafficking.”

The plight of Myanmar’s 1.3 million Rohingya has worsened recently and in the last three years more than 120,000 members of the Muslim minority, who are intensely persecuted in Buddhist-majority Myanmar, have boarded ships to flee to other countries, paying huge sums to human traffickers.

But faced with a regional crackdown on human trafficking, some captains and smugglers have abandoned their ships, leaving an estimated 6,000 refugees to fend for themselves, according to aid workers and human rights groups.

U.N. Secretary-General Ban Ki-moon said he was “alarmed by reports that some countries may be refusing entry to boats carrying refugees and migrants,” according to a statement from his office Thursday. It said Ban urged governments in the region to “facilitate timely disembarkation and keep their borders and ports open in order to help the vulnerable people who are in need.”

But the message from leaders of Southeast Asia on Thursday indicated that was not in the cards.

“What do you expect us to do?” asked Malaysian Deputy Home Minister Wan Junaidi Jafaar. “We have been very nice to the people who broke into our border. We have treated them humanely, but they cannot be flooding our shores like this.”

“We have to send the right message,” he said, “that they are not welcome here.”

“If we take them all in, then anyone who wants to come will come freely,” he said. “Where will the budget come from?”

He had no suggestions as to where they should go, saying: “No one wants them.”

Denied citizenship by national law, Myanmar’s Rohingya are effectively stateless. They have limited access to education or adequate health care and cannot move around freely. They have been attacked by the military and chased from their homes and land by extremist Buddhist mobs in a country that regards them as illegal settlers.