More than she could chew? 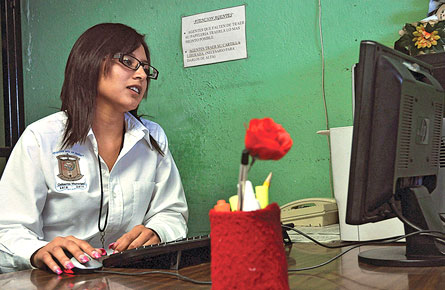 After being hailed as her country’s bravest woman last year, the 20-year-old police chief of a Mexican border town roiled by drug violence made headlines again this week for seeking asylum in the United States. Marisol Valles Garcia, a criminology college student and police chief in Praxedis G. Guerrero, took six days of leave last week, and hasn’t returned yet. The unexplained absence comes less than six months after she had startled Mexico and the foreign media for being the only one to hand in a resumé for the job of police boss in Praxedis, a battleground for rival drug cartels seeking to gain control of an important trafficking route.

Garcia faced the task of restoring a semblance of public security in a town just a few kilometres south of Ciudad Juárez, where over 3,000 people were killed in drug-related violence last year alone. But when she took time off work—allegedly to care for her sick baby—rumours quickly spread that she had fled to the States after receiving multiple death threats and escaping a kidnapping attempt, something Mexican authorities haven’t confirmed. She has now been fired. Filling her post won’t be easy: last time, it took about 14 months.