Mother of Michael Zehaf-Bibeau: 'We are so sorry' 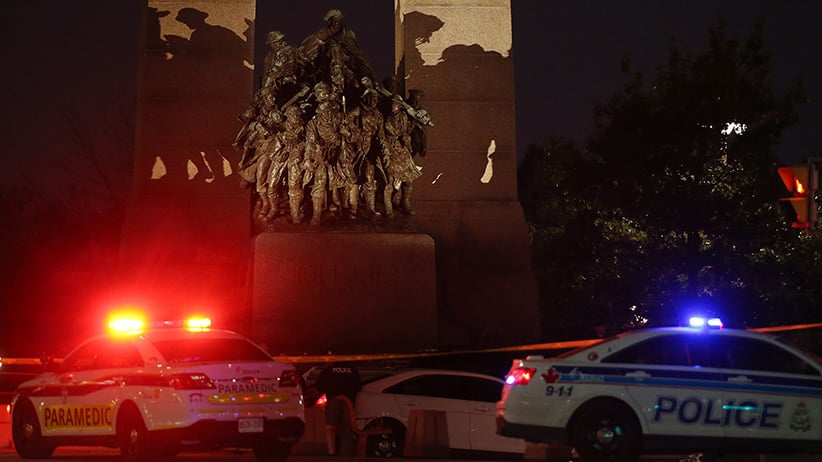 OTTAWA – The mother of the man accused of killing a soldier at the National War Memorial before opening fire in Parliament said she is crying for the victims of the shooting, not her son.

In a brief and tear-filled telephone call Thursday, Susan Bibeau told the Associated Press she did not know what to say to those hurt in the attack.

“Can you ever explain something like this?” she said. “We are sorry.”

Authorities have identified the shooter as Michael Zehaf Bibeau, who was known to police in Montreal and Vancouver.

He is suspected of shooting and killing Cpl. Nathan Cirillo, a reservist from Hamilton who was standing guard at the National War Memorial, before opening fire in the halls of Parliament.

Zehaf Bibeau was then killed in a gunfight in the Centre Block.

Three other people were injured in the melee, but were released from hospital on Wednesday.

Susan Bibeau said she was devastated for the victims of the attack.

“If I’m crying it’s for the people,” she said, struggling to hold back tears. “Not for my son.”

She and her husband had earlier sent the Associated Press an email expressing horror and sadness at what happened.

“I am mad at my son, I don’t understand and part of me wants to hate him at this time,” the email said, explaining that her son seemed lost “and did not fit in.”

“I his mother spoke with him last week over lunch, I had not seen him for over five years before that,” the email said. “So I have very little insight to offer.”

The shootings had placed much of the national capital under lockdown but by Thursday morning, Ottawa police said they believed only one gunman was involved in the attacks.

A search of the publicly available Quebec court records database indicates a man by Michael Zehaf Bibeau’s name had a lengthy criminal record with several convictions and brushes with the law in the early and mid-2000s. According to the records, the man would have turned 32 last week, on Oct. 16.

The last time his name appears in the provincial court database is for a charge in 2006. For that marijuana-related count, he pleaded guilty in court in 2009 and received an absolute discharge.

A source has also said that Zehaf Bibeau had been denied a passport “in the normal course of applying,” but he was not under surveillance by security officials.

The Ottawa shootings came just two days after two Canadian soldiers were run over — one of them fatally — in Quebec by a man with jihadist sympathies.

Harper vowed Canada would remain vigilant against anyone who wished to harm the country.

TEXT OF STATEMENT FROM PARENTS OF MICHAEL ZEHAF BIBEAU

The following is the full text of a statement issued to The Associated Press by the parents of Michael Zehaf Bibeau, the man authorities say killed a soldier at the National War Memorial, then stormed Parliament before being shot dead. The statement was in response to an AP email that asked about reports that their son was mentally unstable or otherwise vulnerable.

“Hi, I am writing this note on behalf of my husband and myself. No words can express the sadness we are feeling at this time. We are so sad that a man lost his life. He has lost everything and he leaves behind a family that must feel nothing but pain and sorrow. We send our deepest condolences to them although words seem pretty useless. We are both crying for them. We also wish to apologize for all the pain, fright and chaos he created. We have no explanation to offer. I am mad at our son, I don’t understand and part of me wants to hate him at this time. You write that our son was vulnerable, we don’t know, we (he) was lost and did not fit in. I his mother spoke with him last week over lunch, I had not seen him for over five years before that. So I have very little insight to offer. We don’t wish to be part of any media circus, we don’t think it will add anything to the conversation. Please respect our privacy although many may not feel we deserve any … Once again we are so sorry. Susan Bibeau and Bulgasem Zehaf”