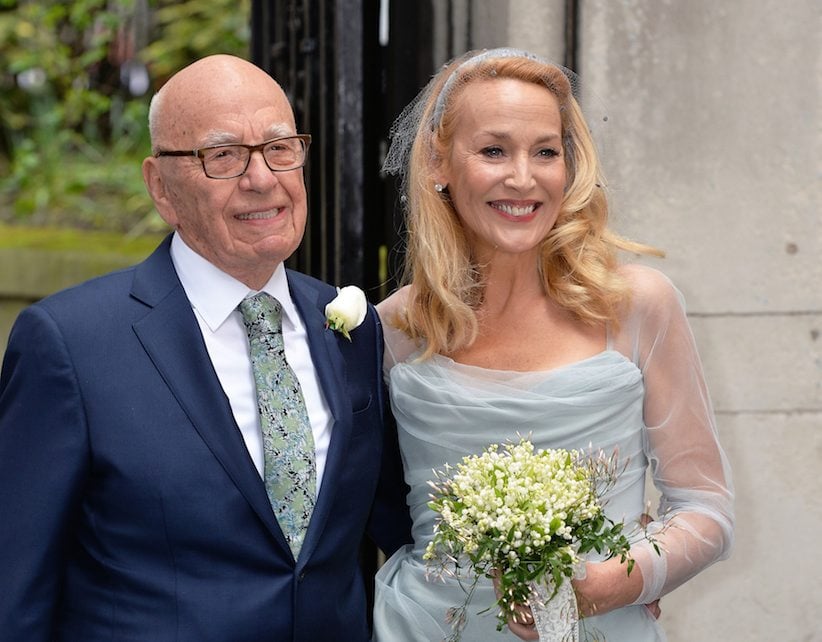 Also attending were the couple’s 10 children. Murdoch, 84, has six children from three previous marriages, while 59-year-old Hall has four with her ex-partner Mick Jagger.

The couple officially tied the knot Friday in a civil service at Spencer House, an aristocratic palace built by ancestors of the late Princess Diana. They were also due to hold a reception there Saturday.

Hall and Murdoch reaffirmed their marriage vows at the hour-long church service, which included music by Wagner, Schubert and Vivaldi and the hymns “Jerusalem” and “Amazing Grace.” Murdoch’s son James read from the Bible’s 1 Corinthians — a passage that declares “the greatest of these is love” — and Hall’s son Gabriel Jagger read from ancient Chinese text the Tao Te Ching.

Australia-born Murdoch, the executive chairman of News Corp., and former supermodel Hall were introduced last year and announced their engagement in January.

This is the fourth marriage for Murdoch, who owns Fox News Channel, movie studio Twenty-First Century Fox, publisher HarperCollins and newspapers in Britain and the U.S.

It is the first official marriage for Texas-born Hall. She and Jagger had a private Hindu marriage ceremony in Bali, Indonesia, in 1990. During divorce proceedings in 1999 a British court declared the marriage invalid.

Britain’s newspapers were based in Fleet Street for decades until Murdoch moved his printing presses to east London in 1986 to escape the grip of the powerful printers’ unions. The rest of the print media soon followed, but the area remains the symbolic home of British journalism.