Nepal earthquake: Crisis at the top of the world

Thousands were killed when the earthquake struck Nepal and, in this impossibly remote and politically volatile country, the tragedy is only beginning 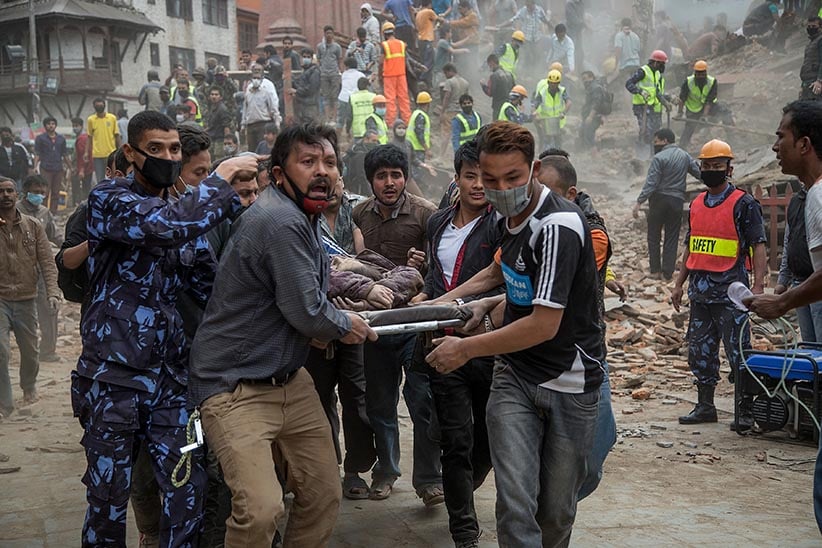 So much of what makes Nepal beautiful and enchanting to outsiders also makes the effects of a natural disaster, like the earthquake that shook the mountain nation on Saturday, killing more than 5,000 people, so much more devastating.

The same shifting tectonic plates that grind together and, over millions of years, have pushed the Himalaya mountains higher than any other on Earth also mean destructive earthquakes are regular and inevitable. They are the flip side of the geology that has made Mount Everest a magnet for wealthy adventurers who crave the sense of accomplishment that comes from summitting the peak, and gives the authenticity of travel to a country whose name still seems synonymous with remoteness.

It is that remoteness, too, that compounds a disaster’s repercussions. The airport in the nation’s capital and largest city, Kathmandu, is small and has struggled to handle incoming flights full of aid and rescue workers. In the city of about one million, rickety houses crowd streets that are inaccessible to rescue vehicles or heavy equipment. They’re pleasant to walk through, and the buildings make a certain amount of sense when space is at a premium and citizens are poor, but they quickly turn deadly when the ground beneath them shakes.

Marilyn Hoar, chief of education for UNICEF in Nepal, was at a hillside hotel overlooking the city when the quake struck. The ground shook. Water gushed from the pool, soaking people on the lawn. Dogs barked and birds took flight. She looked over the city and saw pillars of dust rising from collapsed homes. The Dharahara, an iconic tower previously destroyed in a 1934 quake, had vanished from the skyline. She knew it would have been packed with tourists on a Saturday and, when she saw its absence, along with the rising dust, was sure many were dead.

Thousands in the Kathmandu area are dead. Thousands more are living in makeshift camps, sleeping under tarps or exposed to rain. Some have lost homes; others are afraid to go home because of continuing aftershocks. And some abandoned homes have been robbed, according to Rahul Pathak, a volunteer with the Canadian aid organization GlobalMedic, which is now working to provide clean water and other assistance in Kathmandu. 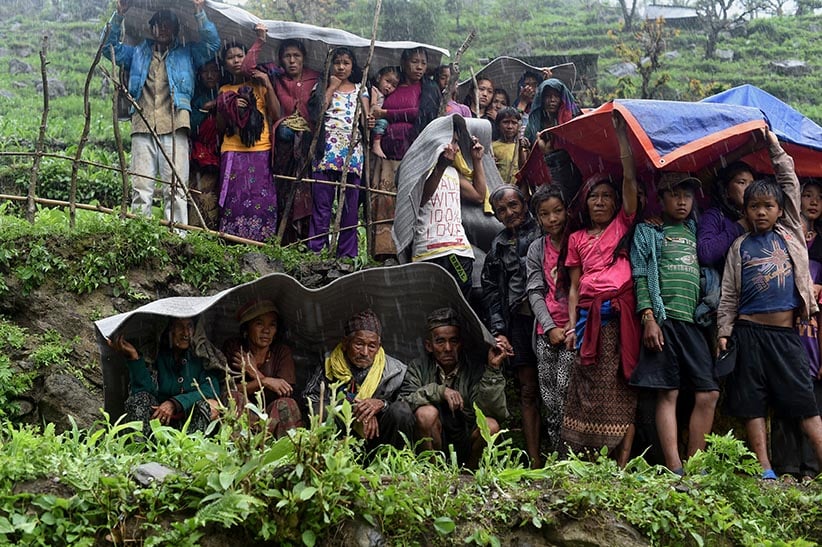 Beyond the capital, things are almost certainly worse. Reports are filtering into Kathmandu of entire mountain villages that have been wiped out. Many are difficult or impossible to reach by road. But inhabitants there need aid and shelter, and their dead must be recovered from broken buildings. Devendra Tak, an aid worker with Save the Children India, now in Kathmandu, says he has heard that as many as three-quarters of Nepalese may have been affected by the quake. It is a country of 28 million.

This is the scale of the disaster, the effects of which Canada, and so many other countries now sending help to Nepal, is hoping to mitigate. Canada has announced a $5-million aid contribution and has pledged to match donations made by individual Canadians over the next month. An advance team from the Canadian military’s Disaster Assistance Response Team was due to arrive in Kathmandu on Wednesday. The Canadian Forces’ C-17 that is bringing them has been made available to evacuate Canadian civilians in Nepal and to take them as far as New Delhi. Some Canadians in Nepal have complained about being turned away from the Canadian consulate there, instead receiving help from the Americans.

RELATED: Eyewitness to disaster on Everest

Nepal is, in some ways, lucky that it suffered the quake when it did. Only 10 years ago, it was still in the midst of insurgency and civil war and would have had more difficulty coordinating the international relief effort now under way. Even today, the state is weak and not always stable.

“At the best of times, the Nepalese government has not been a strong government and has had capacity issues, but this is against the backdrop of a country that has come through a very, very difficult political period,” says Alyssa Ayres, a senior fellow at the Council on Foreign Relations, who was an expert on South Asia with the U.S. State Department before that.

Ayres notes that, in addition to recovering from civil war, Nepal has been unable to write a permanent constitution, and has had seven prime ministers since 2008. “You can imagine that, with that kind of political volatility, it’s pretty difficult to create the attention and focus on nuts-and-bolts governance issues that governments do.”

Given these limitations, and given the crushing poverty of the country, Ayres says she’s reluctant to criticize the government’s response and preparedness. She says that, while she was at the State Department, much of American diplomacy regarding Nepal was geared to reducing disaster risk. She says the European Union took a similar approach.

Hoar, of UNICEF, says aid agencies had also been working with the Nepalese government to prepare for the quake—by retrofitting schools, for example. Other NGOs had stockpiled material. Hoar says the government’s coordination of aid efforts, given the limitations it faces, has been good. But she says there were areas where government laxness left Nepal vulnerable.

The government provided tax breaks to builders whose structures met certain safety requirements. “But you can look at the buildings, and the first four floors are built to code, and then, once that was done, they just added two or three more floors that don’t meet the code,” says Hoar. “And of course, you end up with a very dangerous situation: very narrow and tall buildings that aren’t structurally sound.” 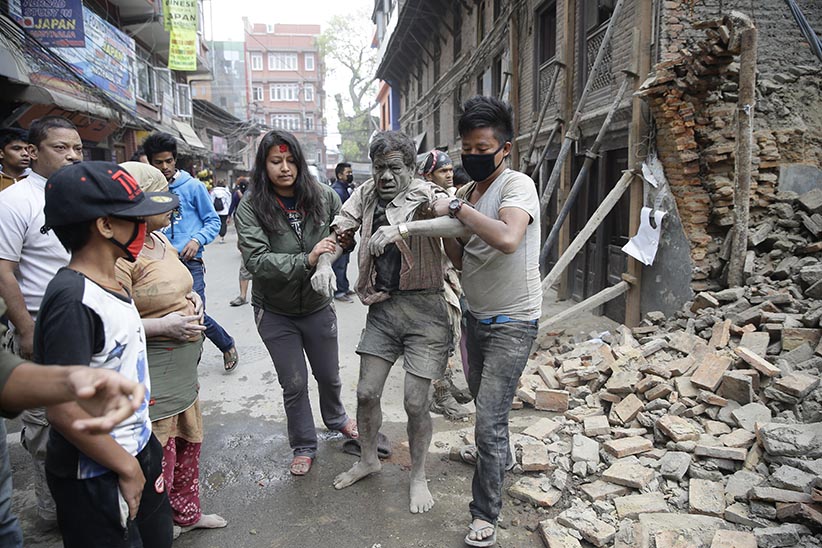 Nepal’s limited infrastructure is also hampering aid efforts. “In Kathmandu, a lot of material has arrived. It’s lying in the airport, most of it,” says Tak of Save the Children India. “There are no trucks to carry out any material, because the transportation system is completely shut. Even if the items were to go out, there are no warehouses in Kathmandu or anywhere nearby where such a large quantity of relief materials can be stored. So, just challenges after challenges.”

In the days ahead, international assistance will move from a focus on rescuing and treating victims to dealing with some of the longer-term ramifications of the earthquake. These may be numerous and serious. They include a need to permanently shelter those who have lost homes, especially with the monsoon season approaching, as well as what will likely be persistent damage to Nepal’s economy and to the livelihoods of Nepalese. Many rely on tourism to make a living, notes Alain Lapierre, the rapid-response team leader for CARE in Nepal, and he estimates it will take years for that industry to fully recover.

Tak worries about the psychological impact on child survivors. “They are afraid, sometimes, in life,” he says. “But they have never seen their parents and elders so afraid and so helpless. And that can have a long-term effect on children, and needs to be taken care of very sensitively and very urgently.”

On Tuesday night, Tak was getting ready to leave Kathmandu to visit a remote area in the countryside that has so far been neglected by relief efforts. He said he was trying to be hopeful that things there might not turn out to be as bad as he feared, but said he expected they would be. 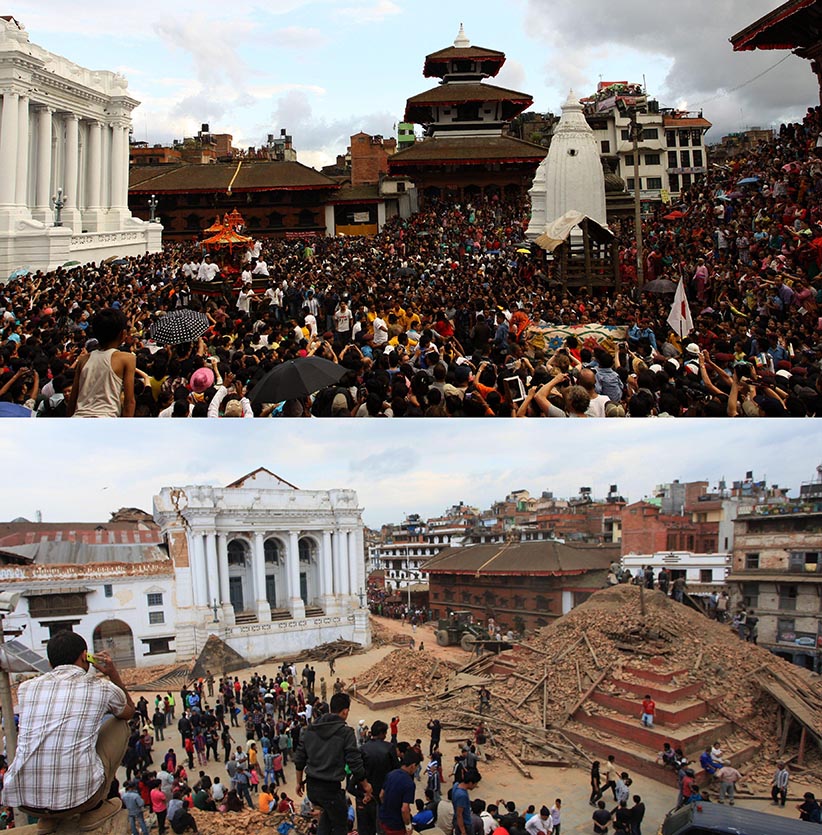 On Sept. 23, 2013, devotees in Kathmandu's Durbar Square participate in the festival of Kumari Jatra, in which three chariots carry human representations of the deities Ganesh, Bhaivara and Kumari, accompanied by musical bands in Durbar Square after the earthquake on April 25 (Sunil Sharma/Xinhua/eyevine/Redux)