President Barack Obama confirmed Kassig's slaying after a U.S. review of the video, which also showed the mass beheadings of a dozen Syrian soldiers 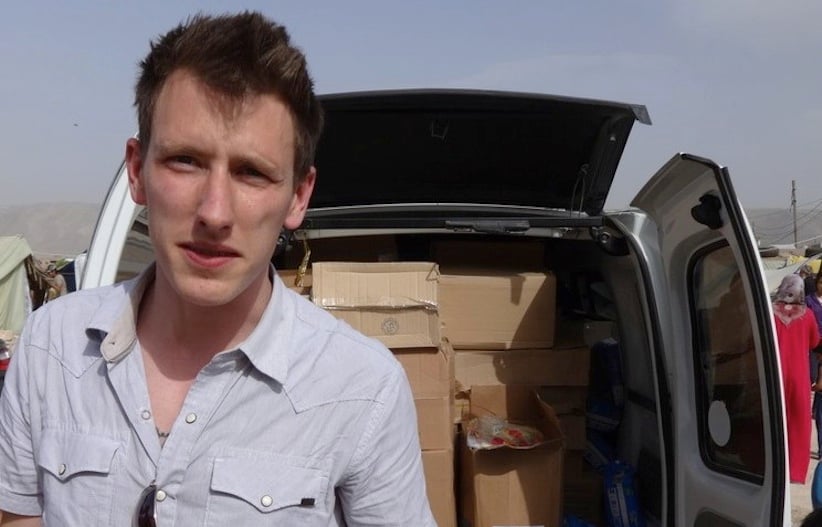 This undated file photo provided by the Kassig Family shows Peter Kassig standing in front of a truck filled with supplies for Syrian refugees. (The Associated Press)

BEIRUT – The Islamic State group has beheaded Peter Kassig, releasing a video Sunday showing a masked militant standing over the severed head of a man it said was the former U.S. Army Ranger-turned-aid worker, who was seized while delivering relief supplies in Syria last year.

President Barack Obama confirmed Kassig’s slaying after a U.S. review of the video, which also showed the mass beheadings of a dozen Syrian soldiers.

The 26-year-old Kassig, who founded an aid group to help Syrians caught in their country’s brutal civil war, “was taken from us in an act of pure evil by a terrorist group that the world rightly associates with inhumanity,” Obama said in a statement.

He denounced the extremist group, which he said “revels in the slaughter of innocents, including Muslims, and is bent only on sowing death and destruction.”

The slain hostage’s parents, Ed and Paula Kassig, said they were “heartbroken” by their son’s killing, but “incredibly proud” of his humanitarian work.

Kassig “lost his life as a result of his love for the Syrian people and his desire to ease their suffering,” the parents said in a statement from Indianapolis, where a vigil was held Sunday for the slain American. His parents attended the vigil.

With Kassig’s death, the Islamic State group has killed five Westerners it was holding. American journalists James Foley and Steven Sotloff were beheaded, as were British aid workers David Haines and Alan Henning.

Unlike previous videos of slain Western hostages, the footage released Sunday did not show the decapitation of Kassig or the moments leading up to his death.

“This is Peter Edward Kassig, a U.S. citizen … who fought against the Muslims in Iraq,” said the black-clad militant, who spoke with a British accent that was distorted in the video, apparently to disguise his identity. Previous videos featured a militant with a British accent that the FBI says it has identified, though it hasn’t named him publicly.

The footage released Sunday identifies the militants’ location as Dabiq, a town in northern Syria that the Islamic State group uses as the title of its English-language propaganda magazine and where they believe an apocalyptic battle between Muslims and their enemies will occur.

The high-definition video also showed the beheadings of about a dozen men identified as Syrian military officers and pilots, all dressed in blue jumpsuits. The black-clad militant warns that U.S. soldiers will meet a similar fate.

“We say to you, Obama: You claim to have withdrawn from Iraq four years ago,” the militant said. “Here you are: You have not withdrawn. Rather, you hid some of your forces behind your proxies.” A U.S.-led coalition is targeting the Islamic State group in airstrikes, supporting Western-backed Syrian rebels, Kurdish fighters and the Iraqi military.

Kassig, who served in the U.S. Army’s 75th Ranger Regiment, a special operations unit, deployed to Iraq in 2007. After being medically discharged, he returned to the Middle East in 2012 and formed a relief group, Special Emergency Response and Assistance, to aid Syrian refugees.

A certified EMT, Kassig had delivered food and medical supplies and provided trauma care to wounded Syrians before being captured in eastern Syria on Oct. 1, 2013. Friends say he converted to Islam in captivity and took the first name Abdul-Rahman.

In a statement issued as he flew back to Washington from the Asia-Pacific region, Obama said Kassig “was a humanitarian who worked to save the lives of Syrians injured and dispossessed” by war. The president offered prayers and condolences to Kassig’s family.

“We cannot begin to imagine their anguish at this painful time,” he said.

Burhan Agha, a Syrian who worked with Kassig in Lebanon, wept when recounting his friend’s humanitarian work.

“If I could apologize to each American, one by one, I would, because Peter died in Syria, while he was helping the Syrian people,” Agha told The Associated Press by telephone from Switzerland, where he is seeking asylum. “Those who killed him claimed to have done it in the name of Islam. I am a Muslim and am from Syria. … (His killers) are not Muslims.”

British Prime Minister David Cameron said he was “horrified by the cold-blooded murder,” saying that the Islamic State group had “again shown their depravity.”

In previous videos showing the beheadings of the two American journalists and two British aid workers, the hostages were shown kneeling in orange jumpsuits as they were forced to make speeches before their killer lifted a knife to their throats.

The latest video did not show Kassig being beheaded. And unlike previous videos, it did not show other Western captives or directly threaten to behead anyone else. It also had lingering close-ups on some militants’ exposed faces, a few of whom appeared to be foreigners.

The video appeared on websites used in the past by the Islamic State group, which now controls a third of Syria and Iraq.

The terror group still holds other captives, including British photojournalist John Cantlie, who has appeared in several videos delivering statements for the IS, likely under duress, and a 26-year-old American woman captured last year in Syria while working for aid groups. U.S. officials have asked that the woman not be identified out of fears for her safety.

The video appeared to be part of continuous efforts to strike at the U.S., which is leading an aerial campaign against the group that began in August in Iraq and spread to Syria the following month.

The video came two days after a recording by the group’s leader, Abu Bakr al-Baghdadi, was uploaded to the Internet. The militant leader warned that the U.S.-led coalition’s campaign had failed and it would eventually have to send ground troops into battle.

The group has declared a self-styled Islamic caliphate in areas under its control, which it governs according to its violent interpretation of Shariah law, including massacring rebellious tribes and selling women and children of religious minorities into slavery.

The group’s militants have also beheaded and shot dead hundreds of captives, mostly Syrian and Iraqi soldiers, during its sweep across the two countries, and has celebrated its mass killings in extremely graphic videos.

The Islamic State group has its roots in al-Qaida’s Iraqi affiliate but was expelled from the global terror network over its brutal tactics and refusal to obey orders to confine its activities to Iraq. It became even more extreme amid the bloody civil war in neighbouring Syria and grew strong enough to launch a lightning offensive across Iraq.

Syria’s war began as an uprising against President Bashar Assad. Activists say that conflict has killed more than 200,000 people.