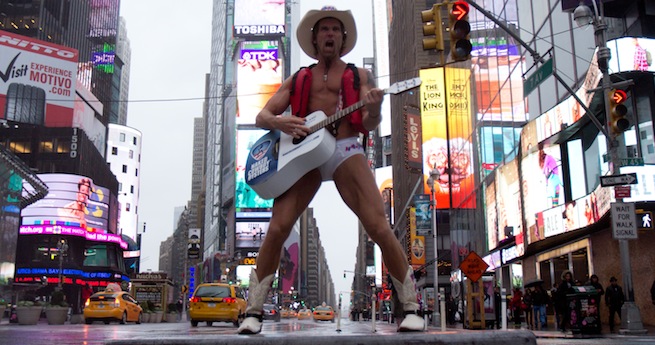 The Naked Cowboy stands tall Monday in the face of the storm. (Claire Ward, Maclean's)

NEW YORK — Ambivalence was widespread in Manhattan on Monday—even as street signs and trees crash to the ground in the East Village, and Hurricane Sandy’s high winds knocked over a crane on top of a 65-storey condo tower in Midtown. A brief chat with two NYPD officers in Times Square confirms what has been widely reported by local media: many residents in New York’s mandatory evacuation zone have ignored the calls for evacuation and instead are talking about how they’ll spend their hurrication. “We were knocking on hundreds of doors last night,” says one officer in a Zone A apartment complex. “We got maybe 20 people to leave.”

And while yellow taxis still dot the slick avenues, transportation has all but ground to halt, as many of the bridges and tunnels connecting Manhattan to the rest of New York are being closed. Public transportation has been shut down since Sunday evening and over 9,000 flights from LaGuardia, JFK, and Newark airports have been cancelled. Most retail shops are closed, too, but a surprising number of businesses have remained open, including wine stores, bodegas, restaurants and notably, bars and pubs throwing “Hurricane parties.” One bar in Alphabet City, which is within Zone B—an area that is at flood risk if the hurricane intensifies—hosts a smattering of locals who, like many others, decided not to evacuate. Watching the overhead TV, as it shows the crane hanging precariously off the side of the condo building on 57th St., one man jokes, between sips of his Guinness, “Someone should invent a Twitter account from the crane’s perspective.”

Indeed, the mood is distinctly casual in Times Square, where tourists dressed in plastic ponchos, grasping soaking wet city maps, are defiantly sightseeing despite the relatively high winds and rain. “Happy Hurricane” has become the greeting of the day.  The Naked Cowboy wears a bright red life preserver, but is still otherwise naked save for his guitar, speedo and cowboy boots. Standing nearby, a Belgian couple in their sixties, dressed in matching red rain coats, see Hurricane Sandy as more of an inconvenience than a threat.

“Our flight is tomorrow, and I’m worried it may be cancelled” says 64-year-old Claine Danielle. “We want to go home. New York is dirty, it stinks, and the weather is terrible.”

Nearby, a longtime newsstand clerk is similarly unmoved. “The media scares people, and then it turns out to be nothing” says Yahya Tai, 37, a New Yorker who has worked at this newsstand for 16 years. “Last year with Irene, there were people out in Times Square dancing in their wet t-shirts.” (Officials worry that New Yorkers are conflating the two storms, Sandy and Irene—which turn out to have very little in common.) Tai’s kiosk—which is open 24 hours a day, 365 days a year, and, he says, will likely stay open through the night—sits across from a clothing store, which like many nearby businesses, has placed sandbags along the doors. “It’s overkill,” he shrugs. “Even if they close the bridges, I’ll just walk home.” That is, he’ll walk over the Queens bridge to his home in Queens, which would take somewhere around four hours on a good day.

Tai’s almost stereotypically tough New Yorker attitude is echoed by several locals who stop by his newsstand for a snack. Matthew Lebourne, 22, who works in communications at the Scientology Center around the corner, complained of long lines at the grocery stores. “It’s just ridiculous,” he says. “If anything, we’ll need food for what, two days?”

Back in Times Square, a Spanish tourist approaches a Public Safety Officer. “Excuse me, do you know where the nearest Subway is?” he says, drenched by the steady rain.

“They’re all closed!” responds Const. Margarita Torres, 50, who has been on the job since Sunday evening and will stay on until the subways are open again, which could be as late as Wednesday morning.

“No, no, I mean the sandwich shop,” replies the tourist. As he walks off in search of lunch, Torres chuckles, referring to approaching Hurricane Sandy. “She’s going to sneak up and bite everybody.”