'We are alive. We are together. We are determined to not let anyone divide us,' says an imam who survived the attack 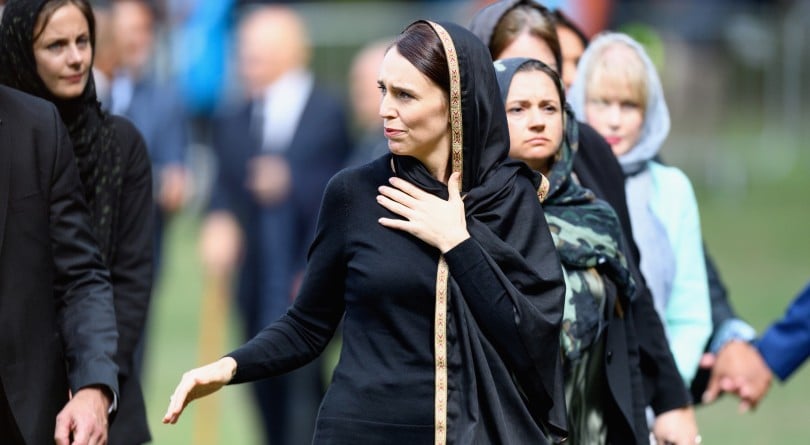 The traditional Muslim call to prayer was broadcast live on public and private television and radio networks across New Zealand, and then the country fell silent. The eerie quiet lasted a full two minutes, marking the close of a week-long agony that has united New Zealanders in grief and resolve.

The muezzin’s song arose from a special Jamu’ah, Islam’s traditional Friday prayer service, conducted on the grounds of Hagley Park directly across Deans Avenue from Masjid al Noor, the golden-domed ground zero of last Friday’s mass murder. Thousands of ordinary New Zealanders attended the service, one of several memorials convened across the country.

But the atrocity of last Friday has also brought out the best in New Zealanders. All week, there have been candlelight vigils and processions. Throughout Christchurch, little shrines have sprung up at workplaces, at schools attended by the dead children, outside Christchurch Hospital, and at the two mosques where the mass murders were committed. The bouquets, wreaths, cards, pictures and mementos laid out along the Christchurch Botanic Gardens’ eastern wall has accumulated to a length in excess of 100 metres.

RELATED: New Zealand shootings: What we know so far

The carnage lasted little more than half an hour. It began when 28-year-old white nationalist Australian and self-described terrorist Brenton Tarrant pulled into an alleyway on Deans Avenue beside the Masjid Al Noor in his silver Subaru station wagon at 1:40 p.m., just as the prayer service was beginning. Livestreaming with a head-mounted camera, armed with several modified semi-automatic weapons and kitted out in what looked like a military uniform, the gunman headed straight into the mosque. The 71-year-old Haji Daoud al-Nabi greeted him with the words, “hello, brother.” The Afghan emigre, a New Zealander for the past 30 years, was the first to be killed.

The first barrage lasted less than six minutes, leaving 42 people dead; a 43rd would die later in hospital. It took only a few more minutes for the killer to make his way east around the grounds of Hagley Park, with its towering oaks, hornbeam, sycamore and sweet chestnut, to the modest Linwood Mosque, formerly a small house. Another seven worshippers were murdered there.

A mere 21 minutes after Christchurch police took the first emergency call—erroneous initial reports were that it was 36 minutes after the first call—Tarrant had been arrested at gunpoint and was lying face down on a sidewalk on Brougham Avenue. His Subaru had been rammed by two rural police officers who had just happened to be in Christchurch for a training program when they heard the alert over the radio.

Tarrant appeared in court last weekend. He has been remanded to appear before a judge on a battery of charges April 5. “You will never hear me speak his name,” Prime Minister Arden told Parliament on Tuesday.

“This terrorist sought to tear our nation apart with an evil ideology that is tearing the world apart,” the Masjid al Noor imam Gamal Fouda told the thousands of New Zealanders gathered for the service in Hagley Park. “Instead we have shown that New Zealand is unbreakable.” Fouda was leading the prayers at Masjid al Noor last Friday when the massacre began. He survived by hiding in the main prayer room. “We are brokenhearted, but we are not broken. We are alive. We are together. We are determined to not let anyone divide us. We are determined to love one another, to support each other.”

RELATED: One family’s struggle, one year after the Quebec City mosque shooting

Imam Fouda identified the evil ideology that animated the killer as “white supremacy,” and the bloodcurdling 74-page manifesto Tarrant published on various extremist websites immediately before the slaughters began—he sent a copy by email to Prime Minister Ardern, for good measure—leaves no doubt about that. The manifesto praises Anders Breivik, the Norwegian mass murder whose 2011 rampage in Oslo left 77 people dead. Breivik was obsessed with what he called the “cultural suicide” of Europe and called for the deportation of the continent’s Muslims.

Tarrant’s manifesto goes further, advocating the mass murder of non-white immigrants in order to avenge the “white genocide” involved in non-white immigration and declining European fertility rates. Among the murderers whose names Tarrant had scrawled on the weapons he used for his killing spree was the Italian fascist Luca Traini, convicted for a series of drive-by shootings targeting African migrants in 2017, and Canada’s own Alexandre Bissonnette, sentenced to 40 years without the possibility of parole last month for the 2017 murder of six men at a mosque in Quebec City.

In his manifesto, Tarrant said he intended only to plan and train in New Zealand when he moved to the city of Dunedin from Australia two years ago, but decided to carry out his mass murder in New Zealand to show “the invaders were in all of our lands, even in the remotest areas of the world, and that there was nowhere left to go that was safe and free from mass immigration.”

Tarrant appears to have spent much of the past few years travelling the world, especially to sites associated with ancient conflicts between Christianity and Islam—Spain, Romania, Bulgaria, Turkey, Serbia and Montenegro. But he also spent time in North Korea, Portugal and France. Tarrant appears to have been living off money left by his father, who committed suicide in 2010. He may also have financed his travels at least partly from a windfall he claims to have made from investments in crypto-currency.

It is probably no coincidence that Tarrant identifies the People’s Republic of China, currently engaged in the incarceration of as many as a million Muslim Uighurs in concentration camps in Xinjiang, as the nation state with “the closest political and social values” to his own.

On Thursday, Police Commissioner Mike Bush revealed to reporters what Tarrant himself had already revealed in his manifesto. There was a third target Tarrant had in mind. A mosque in Ashburton, 90 kilometres south of Christchurch, that Tarrant considered guilty of the “desecration of a church.” Ashburton Muslims had acquired the church and converted it to a mosque several years earlier. Tarrant wrote that if he could carry out his slaughters at the Masjid al Noor and the Linwood mosques without being stopped, the Ashburton mosque would be a “bonus objective.”

Among the world’s most peaceable and welcoming countries, and home to nearly five million people—roughly one in five of whom were born overseas—New Zealand is home to only about 50,000 Muslims. While the focus of global attention has been on Prime Minister Adern’s firm and compassionate leadership and her government’s quick response, New Zealanders themselves have been setting the tone.

New Zealand gun owners who own semi-automatic weapons were already turning in their weapons before Ardern announced a raft of new firearms restrictions this week. All military-style semi-automatic weapons and assault rifles are to be outlawed. Opposition leader Simon Bridges says he supports the move. One of the first farmers to voluntarily turn in their semi-automatic rifles was Green Party candidate John Hart.

RELATED: Canada’s desire for stricter gun control is rooted in our history

Ardern’s government is also preparing an inquiry into New Zealand’s police and intelligence services, to determine what they could have or should have known about Tarrant and the extremist internet milieu he inhabited. It is looking into a coordinated international approach to social-media companies that host and circulate extremist content, and has also outlawed the distribution of the gruesome livestream video Tarrant recorded. But New Zealand’s Sky News voluntarily shut down the 24-hour news channel of its Australian sister station because it was airing footage from the killer’s Facebook livestream.

Three New Zealanders have already been arrested for circulating the 17-minute video, but the biggest problem has been Turkish strongman Recep Tayyip Erdogan, who has been broadcasting footage from the killer’s livestream at local election rallies across Turkey and ranting about a conspiracy orchestrated by western powers to vilify Turkey and Islam. On Monday, Erdogan insinuated that western news organizations are covering up some shadowy group that authored Tarrant’s manifesto for him.

New Zealanders, meanwhile, remain in something like a state of shock. But that hasn’t stopped them from folding their arms around the country’s Muslims. And that compassion was not lost on Imam Gamal Fouda, as he made plain in his sermon to the thousands of New Zealanders who had come to comfort the grieving congregation of Masjid al Noor mosque in Christchurch.

The imam ran down a list of New Zealanders the congregation wanted to thank.

Prime Minister Arden, for starters. The many performances of the Maori dance of defiance, the haka, by Maori and non-Maori New Zealanders alike, to honour the dead and lift the spirits of the living. The New Zealand police. The ambulance crews and first responders and medical teams who were confronted with what St. John’s Ambulance officer Paul Bennett called “a river of blood coming out of the mosque” last Friday.