Newsmaker: Gary Szatkowski, taking the blame for the storm that wasn't

Newsmaker, Jan. 27: A New Jersey meteorologist dons the goat horns for false East Coast snowstorm alarm. But should he be the only one? 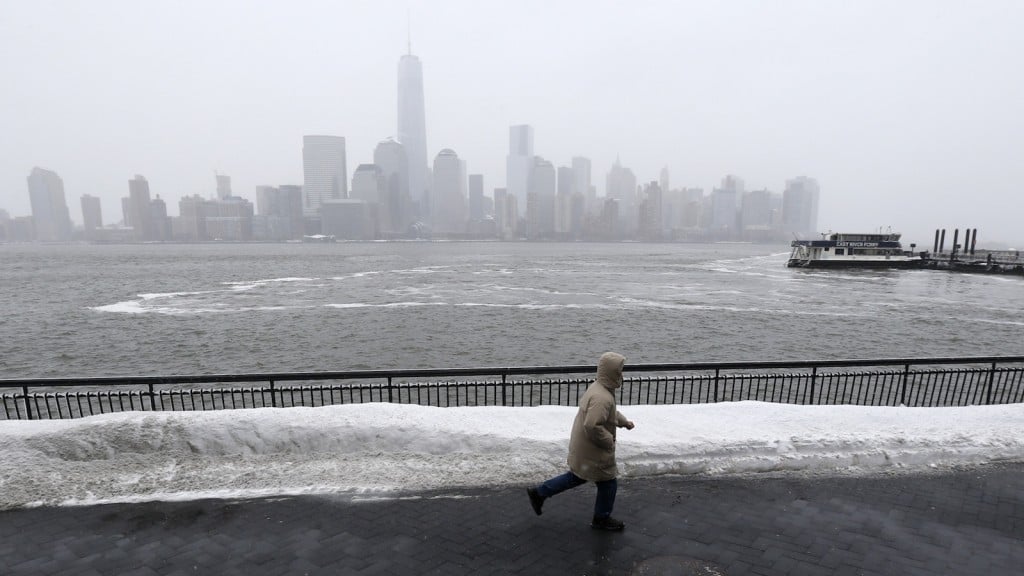 A person runs to catch the New York Waterway ferry on a walkway that was plowed following an overnight snowstorm, Tuesday, Jan. 27, 2015, in Jersey City, N.J. (Julio Cortez/AP Photo)

Weather forecasts should come with those disclaimers you see on investment outlooks. You know: “Such forward-looking statements are not guarantees of future events and involve risks and uncertainties.”

Maybe then we’d be spared the spectacle of grovelling meteorologists and TV weather-thingies when the “Storm of the Century” or “Snowmageddon” or the “Snowpocalypse” fails to live up to its hype. The airwaves and social media sites were clogged with such apologies after the storm billed as the “worst ever” to hit New York City sprinkled a meagre 25 cm of snow on much of the NY-N.J.-Philly area, rather than the expected two-thirds of a metre.

The admissions ranged from lighthearted shrugs (“Alright, this dunce is headed to bed, we’ll get the next one,” tweeted Kate Bilo, weatherwoman for CBS 3 in Philadelphia) to borderline self-flagellation (“This was a major bust of a forecast, the biggest in my short career,” said Adam Rutt, the weatherman for NBC Channel 40 in South Jersey. “I was wrong, very wrong, and I am sorry”).

But the undisputed champion groveller was Gary Szatkowski, a meteorologist in charge of the U.S. National Weather Service station in Mount Holly, N.J.

For New York’s voracious media, the N.W.S. had been the Voice of Doom in the 24 hours before snow began falling. Based on its predictions, New York Mayor Bill de Blasio declared a state of emergency, shutting down the subway due to expected snow for the first time in its 110-year history. Times Square emptied out. Broadway musicals fell silent. Wall Street was almost devoid of guys in pinstriped suits.

“This is not going to be like other storms,” the mayor had warned, adding menacingly: “You’re not going anywhere until we lift the emergency order. People have to make smart decisions from here on, careful decisions, recognize this as an emergency. It is not business as usual.”

With so many people inconvenienced, Szatkowski felt moved to respond on behalf of his service, flat out admitting “a big forecast miss.” Lest anyone view that as inadequate, he added these to his Twitter feed:

My deepest apologies to many key decision makers and so many members of the general public.

You made a lot of tough decisions expecting us to get it right, and we didn’t. Once again, I’m sorry.

Finally, and just a bit ruefully:

At least Mother Nature is throwing me a bone. Its snowing again in Hainesport, NJ.

Szatkowski needn’t have gone so far. Weather forecasting remains an inexact science based on an insane number of inputs and variables—everyone gets that. And the forecasted amount of snow did materialize where the storm hit hardest in Connecticut, New England and eastern Long Island. Geographically, we’re talking a very near miss.

What’s more, it’s not like Szatkowksi instructed de Blasio to play Admiral at the Bridge, ordering all cars except emergency vehicles off the streets and thoroughfares until 7:30 a.m., and banning people from city parks. Part of being a political leader is figuring out the proportionate response to a given event.

Still, New Yorkers could be forgiven for nursing doubt the next time the N.W.S. sends up a flare. If so, they must bear in mind the alternative scenario, that is, inadequate warning of a severe storm.