Or is today, asks Emma Teitel, pretty much the only time American politicians will be willing to touch the topic? 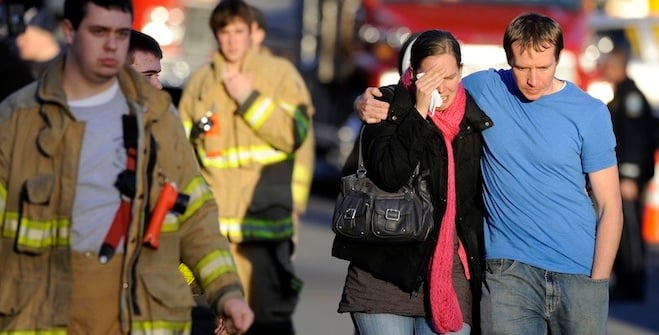 Twenty-seven people shot to death–20 of them children–at Sandy Hook Elementary School in Newtown, Connecticut today, which means that Americans can count on one thing in the aftermath of this tragedy and it probably isn’t stricter gun laws, or in the very least, greater access to mental health care. It’s statements like these…

“Well it does make me wonder, you know with all those people in the theatre, was there nobody that was carrying that could’ve stopped this guy more quickly?”

Apparently “more quickly” is the best America can hope for, nevermind altogether–which is what zero guns would accomplish. Pro-gun control blogger Baldr Odinson does an excellent job disputing the NRA’s popular vigilante argument (a survivor of a shooting himself, he knows a little more about this than, say, Ted Nugent does.)

So far, Republicans (even Nugent) have refrained from “politicizing” the Newtown tragedy, but history–very recent history–tells us that it’s only a matter of time before they do, before the if-the-victims-had-guns-they-wouldn’t-be-victims argument rears its ugly, stupid head. And that’s a good thing, because then, perhaps, president Obama will be forced to respond with more than just platitudes.

This is a good start:

“We’re gonna have to come together to take meaningful action to prevent more tragedies like this regardless of the politics.”

We’ll see what happens next week and the week after that– whether “meaningful action” comes to mean anything at all. New York City mayor, Michael Bloomberg, is skeptical.

From the Mayors Against Illegal Guns press release today:

“President Obama rightly sent his heartfelt condolences to the families in Newtown. But the country needs him to send a bill to Congress to fix this problem. Calling for ‘meaningful action’ is not enough. We need immediate action. We have heard all the rhetoric before. What we have not seen is leadership – not from the White House and not from Congress. That must end today.”

Yet it won’t, because as Ezra Klein notes below, “today”–as in the day of– is pretty much the only time American politicians are willing to touch the topic. And even then, they don’t really touch it so much as actively avoid it.

“Only with gun violence do we respond to repeated tragedies by saying that mourning is acceptable but discussing how to prevent more tragedies is not. But that’s unacceptable. As others have observed, talking about how to stop mass shootings in the aftermath of a string of mass shootings isn’t ‘too soon.’ It’s much too late.”

American gun buffs are opposed to greater regulation on the grounds that a mentally unstable person intent on killing innocent people will kill innocent people regardless. But as I wrote in the wake of the Aurora shootings, why make it easy for them? That bad things happen to good people is a reality of life, not confirmation that we should do absolutely nothing to change it.

The anti-regulation lobby is, at the end of the day, correct. Murderers will always murder. So let’s make sure they can’t pick up one of these at the store.