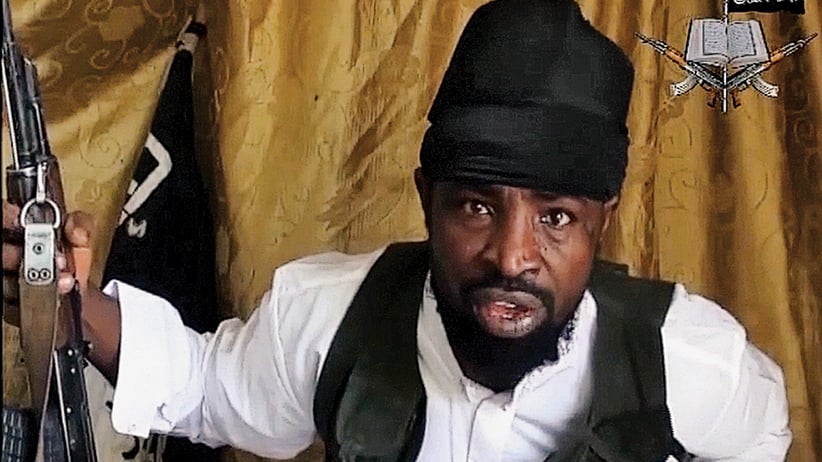 A screengrab taken on March 24, 2014 from a video obtained by AFP shows a man claiming to be the leader of Nigerian Islamist extremist group Boko Haram Abubakar Shekau. (AFP PHOTO / BOKO HARAM)

JOHANNESBURG — Nigeria’s president was among leaders who condemned last week’s attack by Islamic extremists on the French satirical weekly Charlie Hebdo, yet his response to the slaughter of civilians by militants in his own country has been muted.

Some commentators criticized President Goodluck Jonathan’s reticence about the violence in Nigeria’s Baga town, and the lack of a broader international outcry on par with the reaction to the attacks in France. The slogan “I am Baga” — a play on “I am Charlie,” the expression of solidarity with the targeted French weekly — is now circulating on social media.

The global sympathy and the defiant rally in Paris that drew foreign leaders after the assaults that killed 17 people overshadowed the killing of hundreds and perhaps as many as 2,000 people in Baga, a northeastern town near Chad.

Jonathan, who has been touting his domestic record ahead of a re-election bid next month, was quick to express solidarity with France.

“The President believes that the cowardly and ignoble attack by violent extremists is a monstrous assault on the right to freedom of expression,” said a statement by his office the day after the attacks in France.

It did not release a similarly forceful statement about Baga. The attack there started on Jan. 3 and was another bloody marker in a murky, grinding conflict in which information is often scarce, the insurgency is seen by many as a local problem and violence is routine.

The United Nations, the United States and other countries have condemned the violence by Islamic extremist group Boko Haram, and international aid groups are mobilizing to help survivors.

On Monday, U.S. State Department spokeswoman Marie Harf expressed some exasperation with the comparatively little interest in Nigeria’s killings after taking a barrage of questions from media about the weekend rally in Paris.

“I would like to see how many minutes we spend on Boko Haram compared to a march,” Harf told the State Department press corps. “I just want to point that out to people.”

The difference between the reactions to the bloodshed in Paris and in Baga also is related to the broader context, experts say.

The Paris shootings, whose victims included prominent cartoonists, had an enormous impact beyond France’s borders because they were seen as an assault on “fundamental liberty” and an “existential attack on all of Europe,” said Michael Jennings, a senior lecturer in international development at the School of Oriental and African Studies in London.

The violence in Nigeria, however, does not capture similar attention because it “is often presented as part of the ongoing history of violence between communities,” Jennings said.

Muna Ndulo, a law professor and African development expert at Cornell University in the United States, noted that whereas in Paris the media presence was heavy and many events played out before the cameras, “in Nigeria, you still have to contend with actually trying to ascertain what exactly went on. To some extent, that does affect the way people look at things.”

Survivors of the Baga killings described the horrors they witnessed but independent reporting from the scene is virtually impossible for now because the town remains under Boko Haram control. Accounts of the numbers of casualties vary widely. The Nigerian military said 150 people were confirmed dead, but other estimates put the toll at several hundred and as high as 2,000.

Additionally, Ndulo said, the attackers in Paris were French citizens of foreign descent who said they were inspired by al-Qaida and the Islamic State, raising sensitive questions of “inclusivity” and immigration and security policy that many countries can relate to because they face similar tensions within their own populations. In contrast, many fighters in the home-grown Boko Haram movement are Nigerians who may feel alienated by poverty and poor governance, he said.

Jennings warned about the perils of viewing Boko Haram, which recently seized a military base in neighbouring Cameroon, as a local problem.

“All too often, conflicts have been assumed to be localized, just left alone until they reach a pitch where they show their international significance,” he said. “The danger is that we don’t see the links, we don’t see people moving back and forth.”