White gunman arrested in slaying of 9 at historic black church

Police say they have arrested Dylann Storm Roof, who allegedly killed nine inside a historic black church in what officials call a hate crime 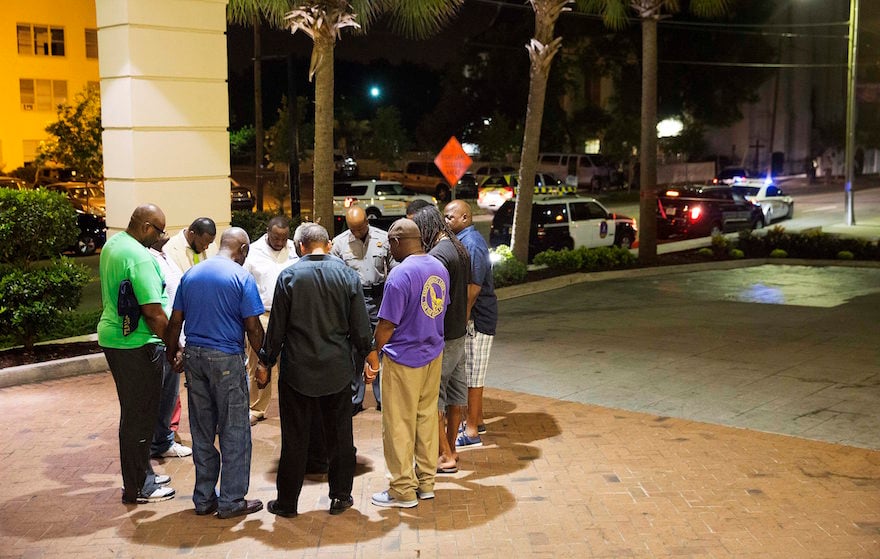 Worshippers gather to pray in a hotel parking lot across the street from the scene of a shooting Wednesday, June 17, 2015, in Charleston, S.C. (AP Photo/David Goldman)

CHARLESTON, S.C. — A white man who joined a prayer meeting inside a historic black church and then fatally shot nine people was captured without resistance Thursday after an all-night manhunt, Charleston’s police chief said.

“At some point, we as a country will have to reckon with the fact that this type of mass violence does not happen in other advanced countries,” Obama said.

Pinckney, 41, was a married father of two who spent 19 years in the South Carolina legislature. He became the youngest member of the House when he was first elected as a Democrat at 23.

“He had a core not many of us have,” said Sen. Vincent Sheheen, who sat beside Pinckney in the Senate. “I think of the irony that the most gentle of the 46 of us — the best of the 46 of us in this chamber — is the one who lost his life.”

Sanders had recently graduated from Allen University. Hurd worked for Charleston County’s library system for 31 years. Doctor was an enrolmentcounsellor at Southern Wesleyan University’s Charleston Campus, according to a friend.

Charleston County Coroner Rae Wooten said autopsies would be conducted over the next several days and did not have specific information on how many times the victims were shot or the locations of their injuries.

“I don’t know what was going through his head,” Konzny said. “He was a really sweet kid. He was quiet. He only had a few friends.”

Roof had been to jail: State court records show a pending felony drug case and a past misdemeanour trespassing charge.

He also displayed the flags of defeated white-ruled regimes: a Confederate flag was on his license plate, Konzny said, and a photo on his Facebook page shows him wearing a jacket with stitched-on flag patches from Rhodesia and apartheid-era South Africa.

Roof wasn’t known to the Southern Poverty Law Center in Montgomery, Ala., and it’s not clear whether he had any connection to the 16 white supremacist organizations operating in South Carolina, but he appears to be a “disaffected white supremacist,” based on his Facebook page, said the centre’s president, Richard Cohen.

The shooting evoked painful memories of other attacks. Black churches were bombed in the 1960s when they served as organizing hubs for the Civil Rights movement, and burned by arsons across the South in the 1990s. Others survived shooting sprees.

This particular congregation, which formed in 1816, has its own grim history: A founder, Denmark Vesey, was hanged after trying to organize a slave revolt in 1822, and white landowners burned the church in revenge, leaving parishioners to worship underground until after the Civil War.

“Of all cities, in Charleston, to have a horrible hateful person go into the church and kill people there to pray and worship with each other is something that is beyond any comprehension and is not explained,” Riley said. “We are going to put our arms around that church and that church family.”

NAACP President and CEO Cornell William Brooks said “there is no greater coward than a criminal who enters a house of God and slaughters innocent people.”

A few bouquets of flowers tied to a police barricade outside the church formed a small but growing memorial.

“Today I feel like it’s 9-11 again,” Bob Dyer, who works in the area, said after leaving an arrangement of yellow flowers wrapped in plastic. “I’m in shock.”

The attack came two months after the fatal shooting of an unarmed black man, Walter Scott, by a white police officer in neighbouring North Charleston, which increased racial tensions. The officer awaits trial for murder, and the shooting prompted South Carolina to pass a law, co-sponsored by Pinckney, to equip police statewide with body cameras.