Is the Canada-EU trade deal dead?

Wallonia – a tiny region of 3.5 million people – now holds a deal-killing veto over the pact that took seven years to negotiate 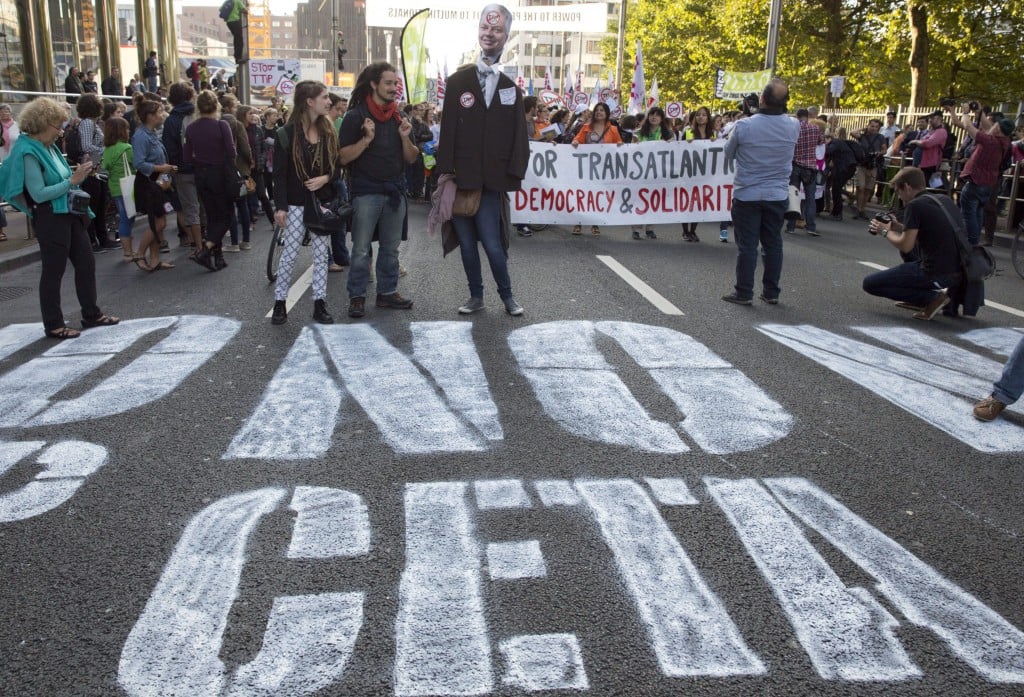 Demonstrators walk over a spray painted sign on the street during a demonstration against international trade agreements in Brussels on Sept. 20, 2016. (AP Photo/Virginia Mayo)

Sources inside Freeland’s office confirmed that the minister “walked out” on the talks with Wallonia’s leaders in Brussels – and the despondent-sounding statement that followed suggested the deal is all but dead.

“Canada is disappointed and I personally am disappointed, but I think it’s impossible. We are returning home. At least I will see my three children tomorrow at our home.”

He said the talks would continue, but suggested any deal might not be ready in time for a planned visit to Brussels next week by Prime Minister Justin Trudeau.

He called for the EU-Canada summit scheduled for next week to be postponed in order to “give ourselves time.”

The EU’s internal dispute centres on persuading the president of the Belgian region of Wallonia to climb down from his opposition to the deal.

Because of Belgium’s constitution, Wallonia – a tiny region of 3.5 million people – now holds a deal-killing veto over the pact between the EU’s 500 million citizens and Canada.

Unless Wallonia can be persuaded to buy into the Comprehensive Economic and Trade Agreement, a deal that took seven years to negotiate will go down in flames.

EU President Donald Tusk said Thursday that if the EU can’t convince people that trade agreements are in their interest, then, “I am afraid that CETA could be our last free trade agreement.”

Trudeau and his ministers have issued similar warnings in recent weeks.

In these tense final days, Canada is holding its fire in an apparent attempt to give its EU partners space to work on the Walloons _ and to avoid inadvertently saying anything that would further offend or embolden them.

“This is now a question for Europeans to decide,” said one Canadian official, who was not authorized to speak on the record about the talks.

“This is an internal matter for the EU, but that doesn’t mean Canada isn’t listening, watching – being attentive.”

With the deal hanging in the balance, Trudeau has yet to publicly announce whether he will attend the Oct. 27 Canada-EU summit, a date set months ago as the official signing date for CETA.

The Walloons want more guarantees to protect farmers and fear being crushed by large trade deals, including the one with the United States that would be pursued if CETA succeeds.

There are two main ways the Walloons could be placated:

• Stronger language favoured by the Walloons could be added to the current five-page joint interpretative declaration that is being appended to the deal.

• A deal among the European Commission, the Belgian government and the Wallonia regional government could allow the Walloons to claim some sort of face-saving victory.