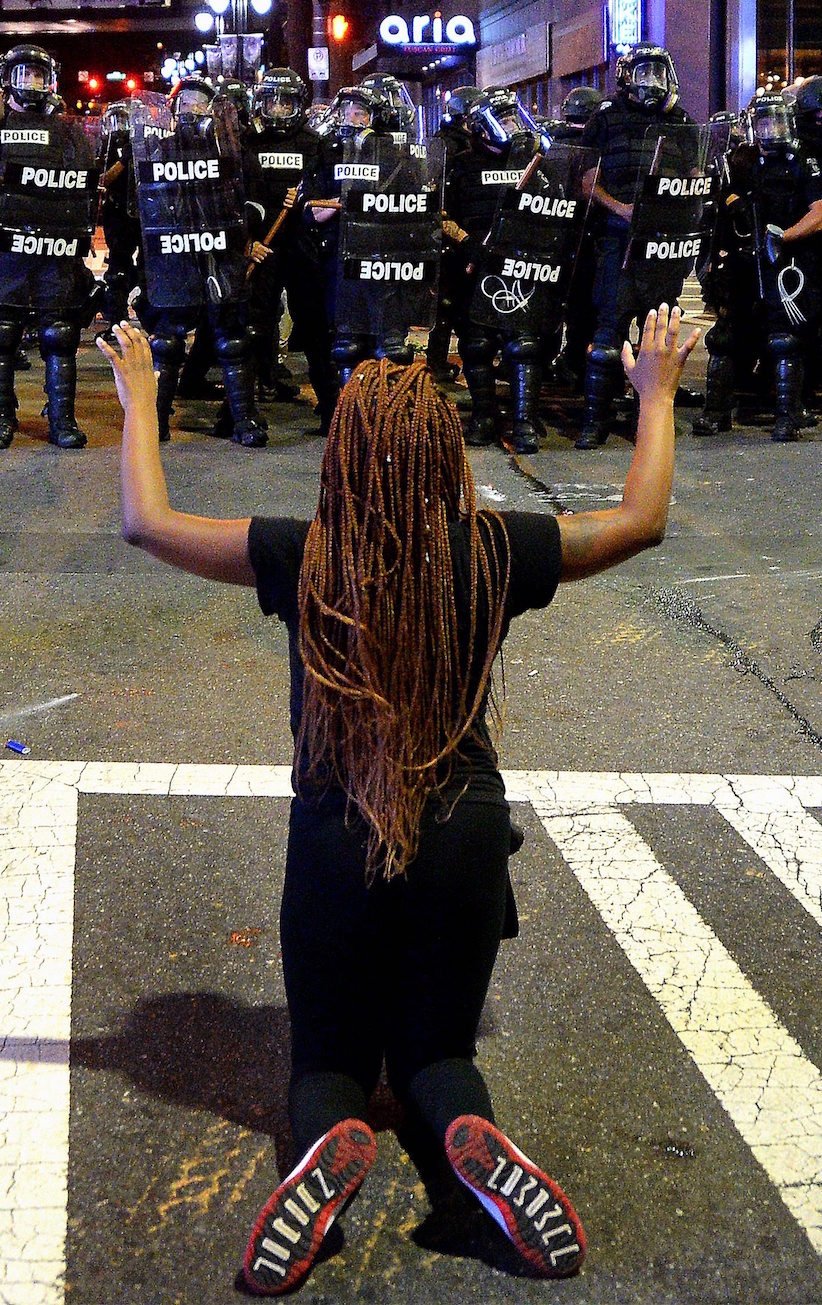 A protester places her arms in the air while on her knees in front of officers in riot gear at the intersection near the Epicentre in Charlotte, N.C., Wednesday, Sept. 21, 2016. (Jeff Siner/The Charlotte Observer via AP)

CHARLOTTE, N.C. — Streets appeared calm early Thursday in downtown Charlotte after a second night of violent protests over the deadly police shooting of a black man, although at least three major businesses were asking their employees to stay home for the day as the city remained on edge.

Bank of America, Wells Fargo and Duke Energy all told employees not to venture into North Carolina’s largest city after Gov. Pat McCrory declared a state of emergency Wednesday night and called in the National Guard after Charlotte’s police chief said he needed the help. The North Carolina National Guard arrived at a Charlotte armoury early Thursday and Guard vehicles left the armoury about 8 a.m.

Federal help also is on the way, with the Justice Department sending to Charlotte a team of trained peacekeepers designed to help resolve community conflict. The department’s Community Relations Service has been deployed to other cities roiled by tense flare-ups between police and residents.

Anger has continued to build over the shooting of 43-year-old Keith Lamont Scott by a black police officer on Tuesday afternoon and the wildly different accounts about what happened from authorities and Scott’s family and neighbours.

A peaceful prayer vigil turned into an angry march and then a night of violence after a protester was shot and critically wounded as people charged police in riot gear trying to protect an upscale hotel in Charlotte’s typically vibrant downtown. Police did not shoot the man, city officials said.

Video obtained and verified by The Associated Press, which was recorded right after the shooting, shows someone lying in a pool of blood as people scream and a voice yells for someone to call for help. People are then told to back up from the scene.

The unrest took many by surprise in Charlotte, the banking capital of the South with a population of 830,000 people, about 35 per cent of them black. The city managed to pull through a racially charged shooting three years ago without the unrest that erupted in recent years in places such as Baltimore, Milwaukee and Ferguson, Missouri.

In 2013, Charlotte police charged one of their own, Randall Kerrick with voluntary manslaughter within days, after the white officer shot an unarmed black man who had been in a wreck and was looking for help. The jury deadlocked and the charge was dropped last summer. The city saw a few protests but no violence.

On Wednesday, hundreds of protesters who were shouting “black lives matter” and “hands up, don’t shoot” left after police fired flash grenades and tear gas after the shooting. But several groups of a dozen or more protesters stayed behind, attacking people, including reporters, shattering windows to hotels, office buildings and restaurants and setting small fires. The NASCAR Hall of Fame was among the places damaged.

At one point, television news helicopters showed protesters on the loop highway around downtown, trying to stop cars for several minutes before police arrived.

“My heart bleeds for what our great city is going through,” McCrory said on WBTV-TV. He was mayor of Charlotte for 14 years before becoming governor.

Authorities said three people and four police officers were injured. Videos and pictures on Twitter showed reporters and other people being attacked.

The violence happened amid questions about what happened when Scott was shot and killed in the parking lot of his condominium complex. Police did not release dashboard or body camera footage, but said Scott had a gun and refused several orders to drop his weapon. Scott’s family and neighbours said he was holding a book.

“He got out of his car, he walked back to comply, and all his compliance did was get him murdered,” said Taheshia Williams, whose balcony overlooks the shady parking spot where Scott was Tuesday afternoon. She said he often waited there for his son because a bicycle accident several years ago left him stuttering and susceptible to seizures if he stayed out in the hot sun too long.

Charlotte Police Chief Kerr Putney was angered by the stories on social media, especially a profanity-laced, hourlong video on Facebook, where a woman identifying herself as Scott’s daughter screamed “My daddy is dead!” at officers at the shooting scene and repeating that he was only holding a book.

Putney was adamant that Scott posed a threat, even if he didn’t point his weapon at officers, and said a gun was found next to the dead man. “I can tell you we did not find a book,” the chief said.

Not long after the Facebook video was posted Tuesday night, the first night of destructive protests began near the shooting scene, about 15 miles northeast of downtown Charlotte. Dozens of demonstrators threw rocks at police and reporters, damaged squad cars, closed part of Interstate 85, and looted a stopped truck and set a fire. Authorities used tear gas to break up the protests.

The distrust of police continued after Wednesday’s shooting of the protester. Many demonstrators did not believe city officials’ assertion that officers did not shot the protester.

“We protesting. Why the hell would we target each other?” Dino Davis said. “They say it was the tear gas, and it looked like one the tear gas exploded. But I think it was a rubber bullet because some of those rubber bullets can penetrate.”

Police said the plainsclothes officer who shot Scott, identified as Brently Vinson, has been placed on leave, standard procedure in such cases. Three uniformed officers at the shooting scene had body cameras; Vinson did not, police said.

Calls for police to release the video increased. North Carolina has a law that takes effect Oct. 1 requiring a judge to approve releasing police video, and Putney said he doesn’t release video when a criminal investigation is ongoing.

But that video may be the only thing that calms Charlotte, said John Barnett, who runs a civil rights group called True Healing Under God, or THUG.