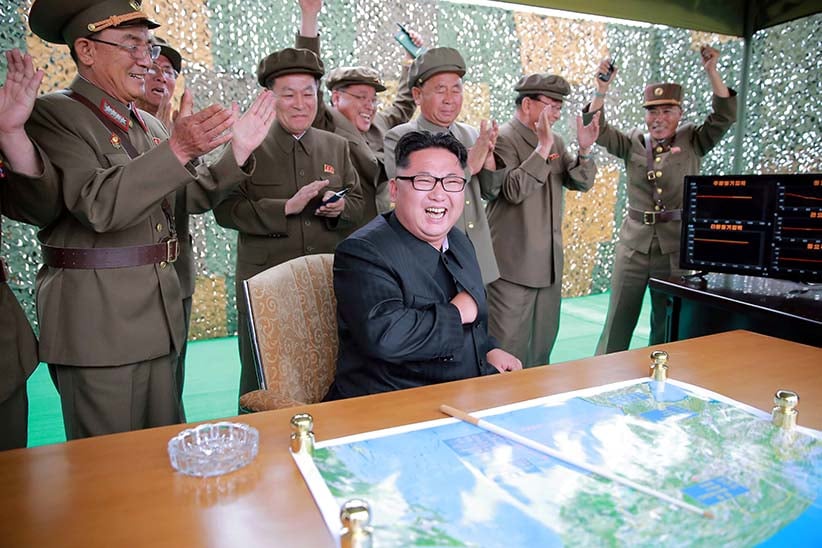 North Korea’s deputy U.N. ambassador accused the United States on Monday of turning the Korean Peninsula into “the world’s biggest hotspot” and creating “a dangerous situation in which a thermonuclear war may break out at any moment.”

Kim In Ryong told a news conference that “if the U.S. dares opt for a military action,” North Korea “is ready to react to any mode of war desired by the U.S.”

He said the Trump administration’s deployment of the Carl Vinson nuclear carrier task group to waters off the Korean Peninsula again “proves the U.S. reckless moves for invading the DPRK have reached a serious phase of its scenario.”

“The prevailing grave situation proves once again that the DPRK was entirely just when it increased in every way its military capabilities for self-defence and pre-emptive attack with a nuclear force as a pivot,” he said.

Tensions have escalated over North Korean moves to accelerate its weapons development. The North conducted two nuclear tests and 24 ballistic missile tests last year, defying six Security Council sanctions resolutions banning any testing, and it has conducted additional missile tests this year including one this past weekend that failed.

Kim spoke on a day that U.S. Vice-President Mike Pence travelled to the tense zone dividing North and South Korea and warned Pyongyang that after years of testing the U.S. and South Korea with its nuclear ambitions, “the era of strategic patience is over.”

After 25 years of trying to deal patiently with North Korea over its nuclear program, Pence said, “all options are on the table” to deal with threat. And he warned that any use of nuclear weapons by Pyongyang would be met with “an overwhelming and effective response.”

Kim said the Trump administration is “trumpeting about ‘peace by strength'” by deploying “one strategic striking means after another in South Korea,” citing the Carl Vinson carrier group, nuclear strategic bombers and stealth fighters.

But he said the “the DPRK remains unfazed.”

“We never beg for peace but we will take the toughest counteraction against the provocateurs in order to defend ourselves by powerful force of arms and keep to the road chosen by ourselves,” Kim said.

He warned that as long as the United States and its allies “scheme to bring down the socialist system in the DPRK,” the government will keep increasing “its military muscle” to protect the country.

He said rolling back the hostile U.S. policy toward the DPRK “is the precondition to solving all the problems in the Korean Peninsula.”

Kim called the press conference to “categorically reject” the U.S. decision to hold an open meeting of the Security Council on April 28 on North Korea’s nuclear program which is scheduled to be chaired by U.S. Secretary of State Rex Tillerson.

He called it “another abuse of authority” by the United States, which holds the Security Council presidency this month, and a violation of the DPRK’s sovereignty.

Pointing to the recent U.S. airstrike on a Syrian base in retaliation for a chemical weapons attack, Kim said “the U.S. without any hesitation perpetrates military attacks” and threatens sovereign states.

He said the United States insists “on the gangster-like logic that its invasion of a sovereign state is ‘decisive, just and proportionate’ and contributes to ‘defending’ the international order in its bid to apply it to the Korean peninsula as well.”

Kim ignored questions about the DPRK’s relationship with China and reports that the government didn’t respond to requests from Chinese officials for a meeting.

Instead he reiterated two Chinese proposals that the U.S. rejected.

One called for “dual-track” talks on denuclearization of the Korean Peninsula — the top priority of the United States — and replacing the armistice that ended the 1950-53 Korean War with a formal peace treaty, a key demand of Pyongyang. The other called for a freeze on U.S.-South Korean military exercises and a freeze on DPRK missile and nuclear tests.