Not wanted in Europe

As millions flee civil war in Syria, European Union countries are building fences to keep them out 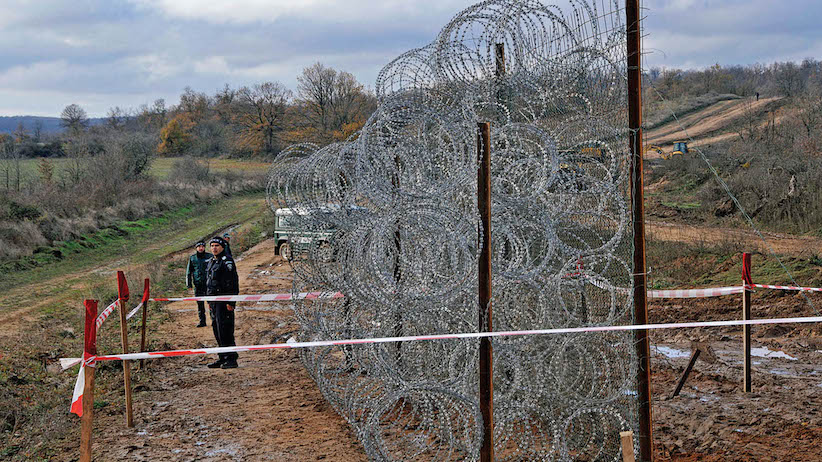 Most people arrive in Bulgaria via two main hubs: the central train station or the airport in Sofia, the capital. But for refugees fleeing the civil war in Syria, the pathway into Europe is on foot, across the Bulgarian border from Turkey. Those who make it in are picked up by border patrols and sent to one of two squalid former military compounds—euphemistically named “reception centres” for hundreds of asylum seekers.

In the coming months, most won’t even make it that far. Bulgaria has employed 1,500 new border guards and last month started building a 30-km fence along its border with Turkey. The measures were put in place primarily to stop the flow of Syrian refugees from entering the country—and, therefore, from entering Europe. More than 2.6 million people have fled Syria since 2011, mostly to nearby Turkey, Lebanon and Jordan, which host a combined 2.3 million refugees. Meanwhile, EU countries, which critics accuse of following a “Fortress Europe” policy to curb migration, have pledged just 12,340 places for Syrian refugees (mostly in Germany and Sweden); many member states haven’t pledged anything.

Bulgaria, for purely geographical reasons, hasn’t had much of a choice but to take in Syrians. “There are few entry points into the frontier of Europe,” says Barbora Cernusakova, of Amnesty International. Bulgaria—the EU’s poorest member state and its buffer from Turkey—has become Europe’s reluctant gatekeeper.

In August 2012, approximately 2,000 Syrian refugees entered Europe via Greece every week, braving dangerous Mediterranean waters. Then Greece employed 2,000 additional border guards and built a 10.5-km fence along its border with Turkey. By October 2012, less than 10 Syrian refugees entered Greece every week. Barred from Greece, refugees turned to Bulgaria. By last October, as many as 100 Syrians a day were entering the country, some smuggled through dense forests. But Bulgaria’s latest deterrents are already working. Currently, fewer than 25 Syrian refugees arrive each week, and the fence isn’t even up yet.

Both Amnesty International and the United Nations High Commissioner for Refugees (UNHCR) say that by preventing Syrians from seeking asylum, Bulgaria may be endangering refugees and even violating international law. “The priority is to ensure that huge numbers don’t enter Europe,” says Cernusakova. “There isn’t much pressure, let’s put it that way, from the EU to allow access.” On the contrary, the EU has steadily increased border-protection funding to Bulgaria since 2010, from $9.3 million to $20.8 million per year. Frontex, the EU border-protection agency, has provided training to Bulgarian border patrols and installed thermal video cameras on the Bulgarian border.

When Bulgarian border guards catch Syrians without a visa, valid passport or identification papers, they’re treated as “irregular migrants”—essentially as illegal aliens instead of refugees. Once apprehended, they typically spend up to three weeks in detention centres before entering centres for asylum-seekers. The former, Cernusakova describes as “effectively prisons”; the latter aren’t much better. In the Voenna Rampa and Vrazhedbna reception centres in Sofia (the latter means “hostile” in Bulgarian), asylum-seekers sleep in makeshift dorms in old classrooms, separated from roommates with thin sheets they hang themselves. When the centres first opened, they had no heating, no electricity, and sometimes only one bathroom for 20 people.

Bulgaria’s State Agency for Refugees (SAR), which runs reception centres, recently doubled its staff and cleared its backlog for asylum claims. According to the head of SAR, Nikolai Chirpanliev, EU and UNHCR support has led to more beds (6,000 now) and better living conditions in the centres. Things are improving, however, partly because fewer people are now reaching the centres.

Once refugees do leave the centres, support in Bulgaria, which joined the EU in 2007, is meagre at best: Refugees get $46 per month in financial support and no language or vocational support. Many hope to continue onward into greener European pastures. But being granted refugee or humanitarian asylum status is not a ticket into an EU country of choice, says UNHCR Bulgaria representative Boris Cheshirkov. Neither status allows Syrians to live or work in a European country other than cash-strapped Bulgaria—a foothold in Fortress Europe, but not the sanctuary many imagined.