Now I want to be an...editor

Anna Chapman is ready for her next job 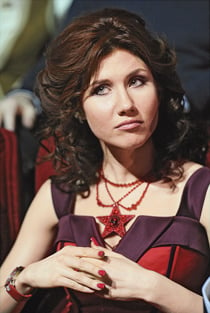 Anna Chapman, the New York social climber turned spy babe turned Russian It Girl, has reinvented herself yet again. The 29-year-old beauty has been appointed editor-in-chief of the Russian magazine Venture Business News, tasked with promoting the country’s next generation of entrepreneurs. “I am sure that my knowledge and international experience in the venture capital business will come in handy,” she wrote to her readers, alluding to the online real estate company she ran in New York until last June, when she was busted for spying along with nine other suspected Russian agents operating in the U.S.

Chapman’s ability to use her infamy as a springboard into career opportunities has ignited comparisons to another self-promoter, Paris Hilton. In addition to her new position, Chapman—who holds a master’s in economics—hosts a reality show, is a creative consultant for a Moscow-based bank, and has patented her name for potential lines of clothing, perfume and vodka. She’s appeared on the cover of Russian Maxim, launched an online poker app and rubs elbows with Vladimir Putin. Next? Chapman is expected to run for parliament.