Obama defends his nuclear record on eve of Hiroshima visit 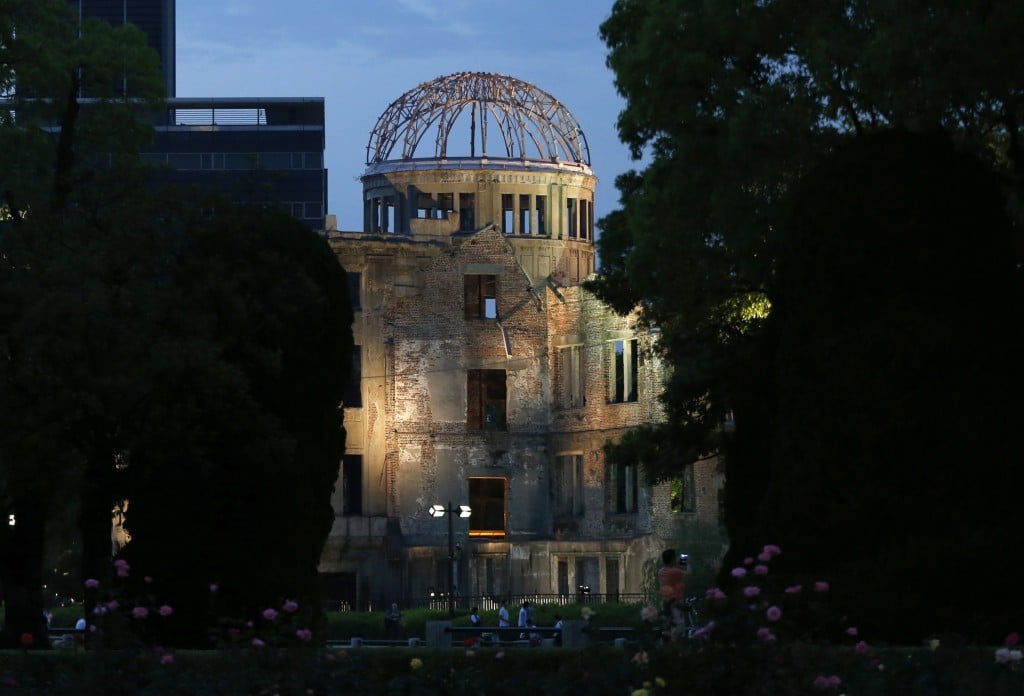 The Atomic Bomb Dome is lit at dusk at the Hiroshima Peace Memorial Park in Hiroshima, southwestern Japan, Thursday, May 26, 2016. U.S. President Barack Obama is to visit Hiroshima on Friday, May 27 after the Group of Seven summit in central Japan, becoming the first serving American president to do so. (AP Photo/Shuji Kajiyama)

SHIMA, Japan – On the eve of his historic trip to Hiroshima, President Barack Obama is defending the vigour of his efforts to rid the world of nuclear weapons. He says he will use his visit to the Japanese memorial site on Friday to underscore “the sense of urgency that we all should have.”

Obama, who began his administration with an audacious call for a nuclear-free world, acknowledged there still is much to be done. In fact, some critics maintain the world is further away from Obama’s goal now than it was at the start of his presidency.

But he is holding out last year’s Iran nuclear deal as “a big piece of business” and pointing to his administration’s negotiation of the New START treaty with the Russians as big steps toward reducing nuclear stockpiles. He acknowledges other big trouble spots, though, including North Korea’s nuclear program and the threat posed by others intent on obtaining nuclear weapons.

“We know that terrorist organizations would have no compunction about using a weapon of mass destruction if they got their hands on it,” Obama said Thursday, “so we’ve got a lot of work.”

He said added his administration has “focused attention on some key points of vulnerability, but we’re not where we need to be yet.”

Obama, speaking at a news conference at a summit of world leaders, harked back to his 2009 speech in Prague in which he first made his call for a nuclear-free world, and offered a reminder that “I noted at the time that I didn’t expect to be able to achieve all those goals in the course of my presidency or even in my lifetime and this is going to be an ongoing task.”

He will reaffirm his lofty vision Friday, when he becomes the first American president to visit Hiroshima, where some 140,000 people died when U.S. forces dropped the first atomic bomb in 1945 that launched the nuclear age. But his comments this time will be measured against his record of successes, setbacks and contradictions.

There are plenty of voices ready to call the president to account, saying he has failed to live up to the high standards he set for himself in Prague.

“Arguably a nuclear-free world is less likely now than when Obama actually took office,” says Richard Fontaine, president of the private Center for a New American Security. He cited the lack of new disarmament steps between the U.S. and Russia, and the administration’s plans to spend more than $300 billion to upgrade its nuclear stockpiles.

“If the U.S. wants to help build a peaceful world, it is not enough to only visit the ruins of the past,” said Hisayo Takada, deputy program director at Greenpeace Japan.

While acknowledging the unfinished business of his Prague agenda, Obama said his administration had “built up an architecture” that has put a spotlight on the crucial issues.

Under last year’s landmark nuclear deal, Iran agreed to curb its atomic program in exchange for billions of dollars in sanctions relief. That gives the administration bragging rights to say that no new members have joined the nuclear club on Obama’s watch.

Obama also won ratification of the most significant arms control pact in nearly two decades. The pact, which took effect in February 2011, requires the U.S. and Russia to reduce their strategic nuclear weapons to no more than 1,550 by February 2018. The president said in 2013 he wanted to cut the U.S. number by another third, but that idea effort stalled as relations with Russia deteriorated.

Remaining challenges, as Obama acknowledged, include the looming threat from North Korea: Pyongyang carried out its fourth nuclear test in January and a long-range rocket launch in February.

Anti-nuclear groups have urged Obama to use his Hiroshima visit to offer new, concrete steps to rid the world of nuclear weapons.

The administration has played down any expectation that Obama will do that, saying he’s going to Hiroshima to offer simple reflections, not a policy address.