... and how it puts the heat on Canada 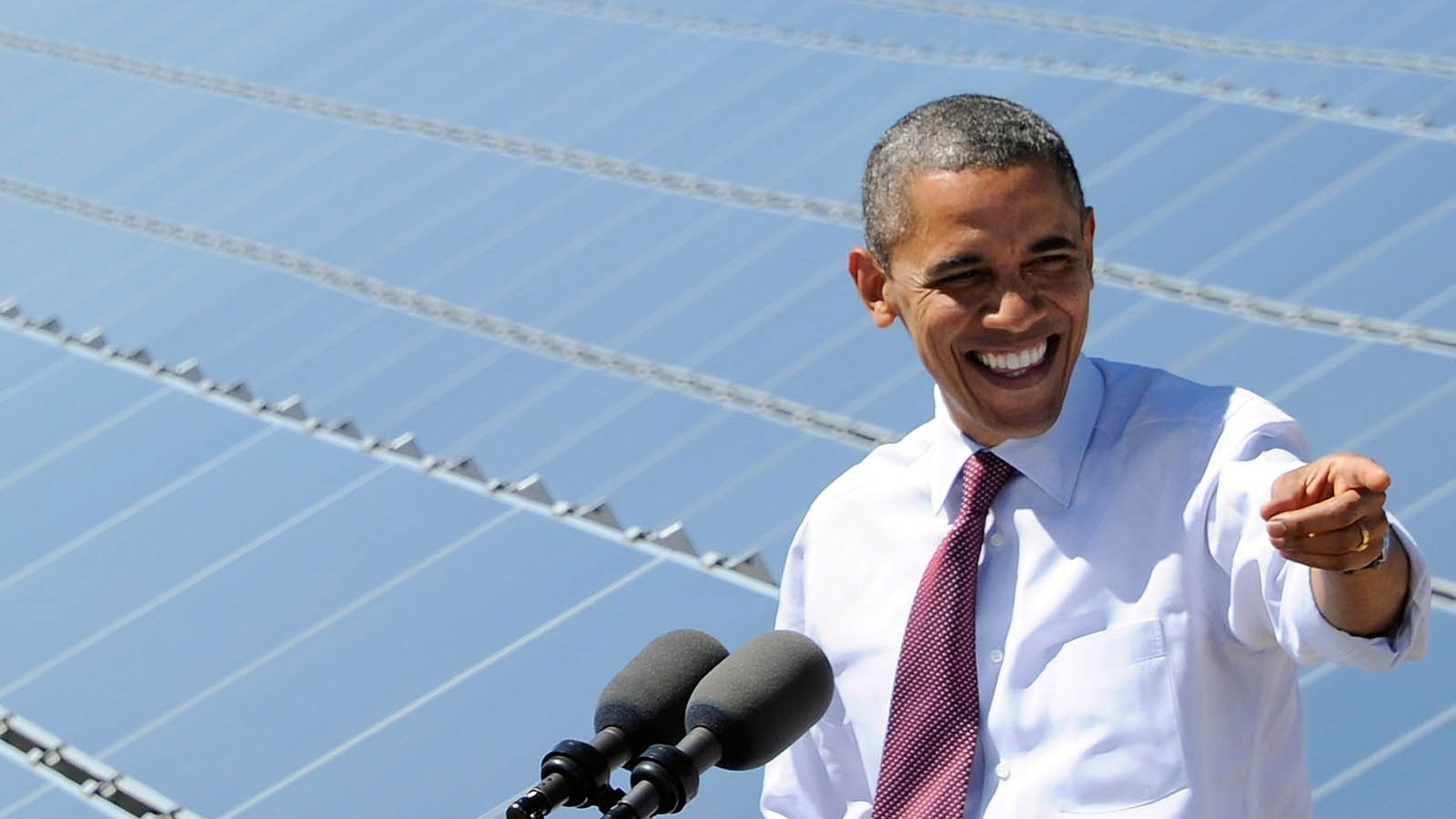 To combat Canada’s reputation as a climate laggard in the United States, the Harper government likes to emphasize that the two countries are committed to the same goal for reducing their greenhouse gas emissions. The federal government has even paid for advertisements in Washington stressing this very point. The problem is that the U.S. has a credible pathway to achieving its target, while Canada is, by the government’s own admission, unlikely to come close to achieving it—our current path will only get us halfway there.

The contrast could soon grow dramatically.

On June 2, U.S. President Barack Obama will unveil the centrepiece of his presidential legacy on climate change: long-awaited regulations to clamp down on existing coal-fired power plants, the largest source of greenhouse gas emissions in the U.S. He is already facing a backlash—not only from Republicans, but also from Democratic lawmakers running for re-election in coal-heavy states, who accuse him of waging a “war on coal.” The theme is likely to become a leading line of attack against vulnerable Democrats in the high-stakes mid-term elections in November that could flip control of the Senate to Republican hands.

But as he heads into the final stretch of his presidency, Obama appears determined to leave a legacy on climate change. Rather than quietly publish the new power-plant rule in the Federal Register, Obama plans to announce it personally, said Environmental Protection Agency administrator Gina McCarthy. The personal touch, she said, is “a strong indication of how important he sees this.”

Any muscular action by Obama will put renewed pressure on the Harper government, which is already failing to keep pace with the U.S. But it is more and more difficult to see how Canada will catch up.

Five years ago, at an international conference in Copenhagen, Canada and the U.S. both committed to the same specific goal: to reduce their annual carbon emissions to 17 per cent below 2005 levels by 2020. Both countries reported on their progress toward their targets to the United Nations earlier this year, and the difference in commitment was obvious. The U.S. plan declared proudly that “President Obama’s climate action plan will keep the U.S. on target to reach our goal.” Canada, by contrast, muttered that meeting its commitment “could be challenging.”

The U.S. is in a similar situation, at least in the absence of stringent action on coal. It has cut emissions significantly since 2005, but without additional policies, emissions are expected to grow slowly between now and 2020 as the economy improves. The difference is that the Obama administration has laid out a real path to reaching its goal and is preparing to move down that path with the new coal-ﬁred power plant rules. Of course, the rules will face political and legal challenges, so nothing is certain. But the Canadian government has not even identified a path that would get the country close to the goal. Instead, it has vaguely told the UN that businesses, individuals, provinces, and cities will have to take some kind of actions on their own in order for Canada to meet its target.

At the heart of the gap between the two countries is a hard economic reality for Canada: it’s likely to be much more expensive to reduce emissions here than in the U.S. Mostly this is due to the fact that our fastest-growing source of emissions—the oil sands of Alberta—are expected to continue to grow and are of significant economic importance to the country. Meanwhile, the most emissions-intensive sector in the U.S.—coal—is already declining, even without Obama’s coming policy intervention. American coal-power emissions dropped 14 per cent from 2005 to 2011 and are expected to decline another seven per cent by 2020. This has come thanks to the availability of cheap natural gas, which produces much less carbon when burned, along with reductions in total electricity demand and the impact of existing regulations targeting mercury emissions from coal-fired power. For the U.S. to meet its 2020 commitments, it will need to accelerate trends already in progress—reductions in emissions from power generation—by moving itself from coal to cheaper natural gas more quickly. For Canada to meet its targets, it will need to reverse trends in oil sands emissions growth.

It is now becoming clear that when both countries committed to the same goal back in 2005, Canada signed on for far more economic and political pain. Canada would need to impose a higher cost on carbon emissions in order to incentivize the necessary spending by industry or behaviour changes by consumers. In the U.S., it was estimated when the commitments were made that it would take the equivalent of a $35 per tonne carbon tax to meet its 2020 commitments, according to a U.S. leading think tank, Resources for the Future. In Canada, similar analyses suggested at the time that it would take $100 per tonne.

A $100 per tonne price on carbon is not being seriously contemplated by Canada. Alberta’s much-vaunted carbon “levy” is just $15 per tonne. In recent years, a $40 per tonne charge was floated but was quickly walked back by then-premier Alison Redford. Prime Minister Harper’s government once talked about requiring carbon capture and storage from all new oil sands facilities and imposing a significant price on carbon from firms that did not improve their emissions performance, but the idea faded away.

The Harper government for years has been promising to bring forward specific regulations for the oil and gas industry, but has not acted. The Prime Minister has said he wants to regulate the sector only “in concert” with Washington because unilateral measures by Ottawa would disadvantage Canadian energy producers, who sell almost all their oil and natural gas exports to the U.S. But proposals to enact similar regulatory standards for oil refineries in the U.S. have languished, and no regulation of emissions from U.S. oil and gas production are likely at the federal level.

The political path for the U.S. to reach its 2020 commitments has been full of obstacles. Aspirations for a joint cap-and-trade system died after conservatives blocked a vote on such a bill in the Senate early in Obama’s first term; Republican control of the House of Representatives since 2011 killed any further chances of such a deal.

Still, Obama has unilateral, executive-branch, rule-making powers under the federal Clean Air Act to go after coal-powered plants. Although coal consumption is declining, without new policies in place, U.S. coal power is still projected to account for 1.6 billion tonnes of greenhouse gas emissions by 2020—that’s over 30 per cent of the U.S. total emissions allowed under the Copenhagen agreement. (Likewise, without new policies, Canada’s oil and gas sector will also account for about a third of its 2020 goal for total emissions, or 200 million tonnes.)

As the President pushes forward, his party could pay a high political cost. While national Democratic activists support strong coal regulations, they’re controversial in conservative-leaning regions that could be crucial for determining which party controls the Senate. Last week, seven Democratic senators, including several in vulnerable seats up for re-election in Louisiana, Arkansas and Virginia, asked Obama to abandon an existing rule that requires future coal plants to use costly carbon capture and storage techniques to reduce emissions, arguing the technology is commercially unproven. Alison Lundergan Grimes, a Democratic candidate within reach of ousting the Republican Senate minority leader, Mitch McConnell, in Kentucky, which has many coal mines, is particularly vulnerable on the issue. “I don’t agree with the President’s war on coal,” she declared this month after her party’s nomination contest.

Canada has already adopted tough rules that require coal plants reaching the end of their useful lives to either shut down or adopt retrofits that reduce their emissions to levels comparable with a natural-gas power plant. Because such reductions are not practically achievable without the expense of carbon capture and storage, it is usually not economically viable to retrofit an old plant and they instead shut down. But those rules will have a much smaller impact on Canada’s emissions than they would if Obama announces something similar in the U.S. next month simply because we use much less coal, thanks to Canada’s greater reliance on low-emission hydroelectric and nuclear power.

If Obama’s move on coal is substantive, Canada will have a hard time keeping up. Oil sands extraction uses a lot of energy to turn water into the steam and to refine the heavy bitumen into lighter forms of oil. Carbon capture and storage may hold out the most promise for deep reductions in emissions, but this remains prohibitively expensive, adding as much as $10 per barrel to production costs, with about 50 per cent of that reflected in lower royalties and taxes from oil sands. Moreover, requiring carbon capture and storage on all new facilities could cut projected oil sands emissions by half—but that would still only get Canada to 70 per cent of its goal by 2020.

Of course, Canada could reduce emissions by reducing the production of oil sands. This would be the most expensive option. Reductions in production would likely come at a cost, to firms and provincial coffers, of $20 to $40 for each barrel of oil not produced, or $200 to $1,000 for each tonne of carbon not spewed into the atmosphere.

There’s no question the Canadian government faces a trade-off. The costs of action are high. Yet if the government decides not to take stringent action on oil and gas emissions, we will not meet our international commitments. When that happens, blame will fall on the oil sands, and, as the noisy opposition in the U.S. to the Keystone XL pipeline has shown, this will make it harder to sell oil sands products. Profitability and tax revenues will take a hit one way or the other.

With stringent coal regulations, the U.S. can reach its target with no direct regulations on oil and gas. Canada can’t. The question for the Harper government is whether it will swallow the political and economic costs of doing what it takes to meet our commitments—or come clean and admit that “halfway” to our goal is far as Canada will ever get.