Obama vs Trump: A tale of two presidents in Europe

In the same week, Obama was embraced like a saint while Trump was a diplomatic disaster. It's the best and worst of times. 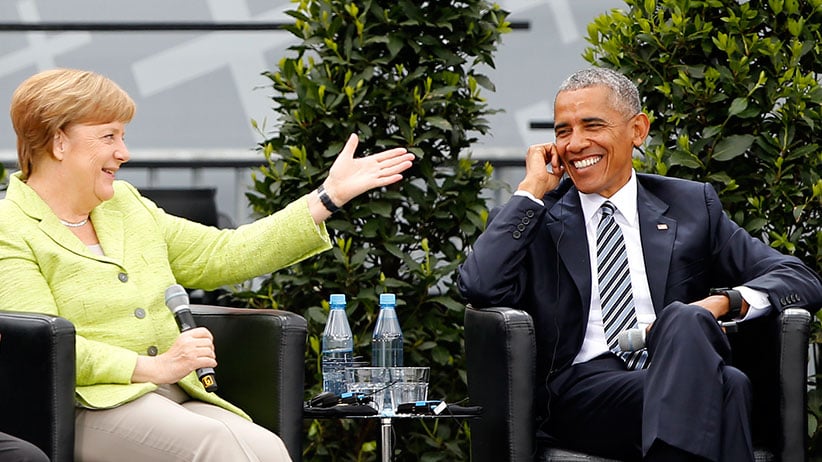 German Chancellor Angela Merkel and former U.S. President Barack Obama attend a discussion at the German Protestant Kirchentag in front of the Brandenburg Gate in Berlin, Germany, May 25, 2017. (Axel Schmidt/Reuters)

And so might begin the very different stories of Donald Trump and Barack Obama, as they began their public trips abroad in late May: Trump’s first as the acting American president, and Obama as his predecessor.

The timing was pure coincidence; the contrast could not be sharper.

In Berlin, Obama joined his erstwhile ally, and now personal friend, German Chancellor Angela Merkel, in front the historic Brandenburg Gate. They were the guests of Germany’s Lutheran Church, invited to take part in a discussion on religion, democracy and civic engagement, and to join the 500th anniversary celebrations of the launch of the Protestant Reformation.

It was a love fest, taking place on Ascension Day, when, for the Christian faithful, Jesus leaves the Earth to sit at the right hand of God, to be replaced by the Holy Spirit among believers.

And, from his first accented “Guten Tag” to his closing words, Obama did his eloquent best to suffuse a global “yes we can” spirit into an enthusiastic and largely young audience of 70,000, a crowd that cheered at almost every one of his statements.

He never once mentioned Trump, but Obama did evoke the American debate about immigration from Mexico and Latin America. “The struggle that I faced and I think Angela faces, is that, in the eyes of God, a child on the other side of the border is no less worthy of love and compassion than my own child,” he said to some of the loudest applause.

In the symbol-city of Cold War division, he added: “We can’t hide behind a wall when it comes to dealing with problems around the world.” He told the crowd they must “push back against those trends that would violate human rights or suppress democracy or restrict individual freedoms.”

It wasn’t hard for people to read between the lines.

Michel Steinbrueck, a 33-year-old pastor from Hannover, said there was no comparing the two presidents. “I think Obama gets more to what is existential, and critical, for the survival of the Western world. But Trump is a populist, in a way that ignores the globalization of the world. It’s just ‘America First’.”

Obama was unstinting in his praise of Merkel, lending support to a woman the New York Times and many others described, upon Trump’s election, as “the leader of the free world.” Merkel faces her fourth federal election in late September, and Der Tagesspiegel newspaper suggested his “popstar” appeal might help her.

The numbers are there. A Pew Research poll conducted in June, before Obama even left office and assumed elder-statesman status, showed 89 per cent of Germans had confidence in him, versus six per cent for Trump.

That “unlove” for Trump was Europe-wide, according to the poll—and given his performance on his first trip abroad, appears likely to grow. The trip began in the Middle East and the Vatican, before moving on to Brussels, for meetings on Thursday at NATO and European Union headquarters. Among the leaders he met in Brussels was, of course, Merkel, who had just spent a visibly happy morning with Obama. 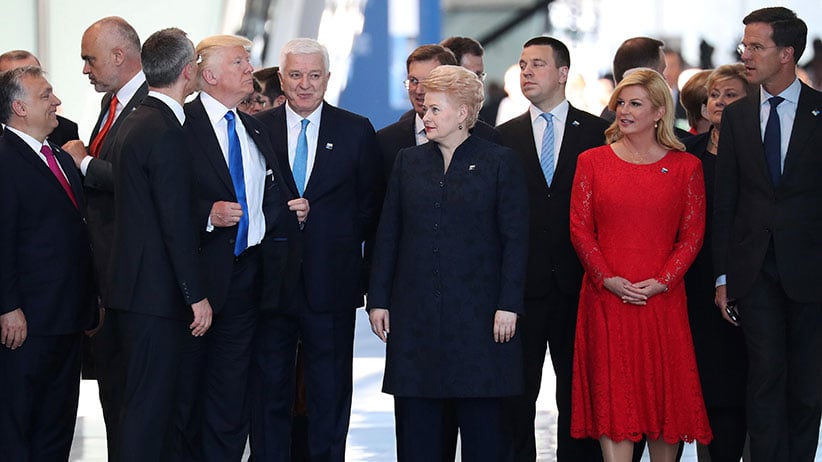 As a candidate Trump had accused her of “ruining Germany” for welcoming some 800,000 refugees, mostly from Syria.

In March, as president, he apparently refused to shake her hand for the cameras during her trip to the White House (he claims he “didn’t hear” the photographers’ shouts to shake hands.) In Brussels, he was at it again: attacking Germany as “bad, very bad,” in a discussion with European Commission President Jean-Claude Juncker.

Germany’s Der Spiegel magazine, quoting European Union diplomats, says Trump complained to Juncker of the U.S. trade deficit with Germany. “Look at the millions of cars they sell in the U.S. Terrible. We’ll stop it.”

The Trump administration previously showed it did not understand that Germany does not negotiate its trade deals—that job falls to Brussels, which runs the European Single Market and trade policy. While his delegation tried to water down the president’s statement, to “stop it” he’ll have to risk a trade war with the world’s largest trading bloc, the European Union. Not Germany.

But Trump wasn’t just angry at the Germans. Earlier in the day he berated other NATO members for not spending two per cent of GDP on defence, as they had pledged in 2014. “Twenty-three of the 28 members are not paying what they should,” he said, showing he had not heeded explanations from foreign officials that European national budgets are often bust because of the eurozone crisis, or that spending on development aid is another way of ensuring peace.

But Trump’s body language and schoolyard bully social skills drew at least as much comment as his statements in Europe. First there was the tense handshake with France’s new president, Emmanuel Macron (described by some French commentators as the “French Obama”), which caused knuckles to whiten and jaws to clench, according to the pool reporter present.

Then there was Trump’s pushing aside of Macedonian President Dusko Markovic in order to get ahead of the group visiting the new NATO headquarters. When Prime Minister Justin Trudeau called out, “Everybody wave!” as NATO leaders posed for a group photo, all did so. Save for Trump.

But what unsettled NATO allies more than anything was something Trump did not do. In his speech to fellow leaders he failed to re-commit the U.S. to NATO’s keystone Article 5 of collective defence, the “one for all and all for one” clause.

Since NATO’s founding in 1949, it has only been invoked once: on Sept. 11, 2001, when Canada and European NATO members wanted to show their resolve and solidarity with Washington after the 9/11 attacks.

Even veteran American diplomats were shocked. Nicholas Burns tweeted: “I was U.S. Ambassador to #NATO on 9/11. Remember Europe’s support for us. Trump needs show same support to Europe now to contain Russia.”

Trump completes his first trip abroad with a G7 meeting observers in Italy expect to be difficult, with European public opinion strongly hostile to his presidency and fearful of the future he may bring, and all major European leaders largely unsure of how to deal with a man they feel is, at best, a loose cannon.

Meanwhile, Obama returns home to Washington, his status in Europe as a cherished former president intact.

His stardust—the Obama “holy spirit”—may or may not help Merkel. He did, after all, call on Britons to vote against Brexit while president, only to see them decide to leave the EU. Instead, it could be Trump who has the decisive influence for her, and Europe.

Europe’s populists, in the Netherlands, France and Germany, initially hailed his election as proof that their ideas—closing borders, throwing out immigrants—were sweeping Western nations. The endless controversy and scandal hitting the White House, however, has made that association toxic.

In Germany, the anti-immigrant Alternativ fuer Deutschland has seen its electoral promise wither, in part because of internal divisions, but also because voters don’t want anything to do with a party that once held Trump up as a model.

The Trump association is also used by analysts to help explain the defeat of France’s Marine Le Pen in the May presidential election, and the relatively poor showing of Geert Wilders in the Netherlands’ vote in March.

As strange as it may seem, it could very well be the president many Europeans see as bringing about the “worst of times,” as Dickens had it, who will, despite himself, deliver something not necessarily the “best,” but definitely better.